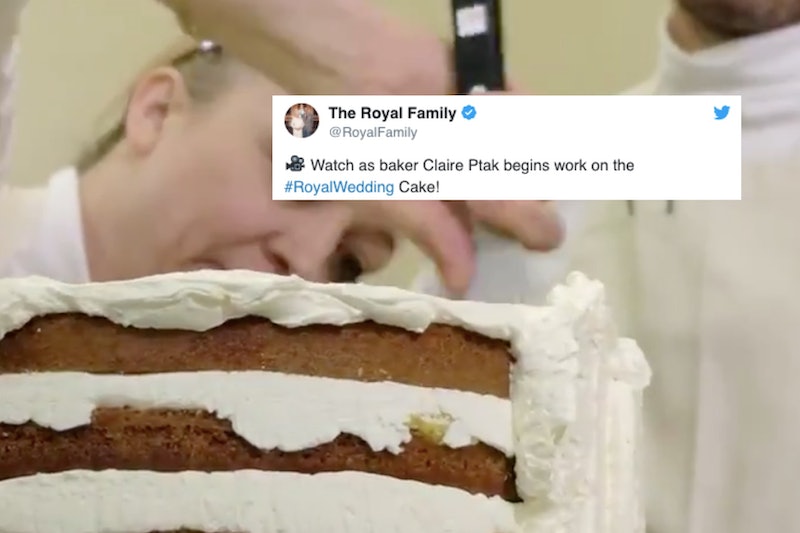 Prince Harry and Meghan Markle are only hours away from tying the knot, and while everyone's excited for the ceremony, anyone who's attended a wedding can tell you that the reception is where it's at. There's been speculation for months about Harry and Meghan's wedding cake — early reports said it would likely be banana-flavored — but we finally have answers. Photos of the royal wedding cake are starting to come out, and it looks beautiful. The cake is made with organic lemons and English elderflower, a plant with an herbal and fruity taste.

In a video shared from the royal family's official twitter account, baker Claire Ptak shares how she made the cake. "We've been so lucky to work at Buckingham Palace to bake the cake and ice the cake. The cake is made up of lemon sponge. It has an elderflower syrup drizzle on the sponge," she says in the video. "It has an Amalfi lemon curd and then it has a Swiss meringue buttercream with elderflower. We will assemble it in-situ at Windsor Castle on Saturday morning and then add the flowers."

The video of Ptak working at the cake is pretty mesmerizing, and she makes it look much easier than it actually is. Being chosen as the baker for a royal wedding is a huge deal, and she expressed her excitement in a statement released by the royal family. "I can’t tell you how delighted I am to be chosen to make Prince Harry and Ms. Markle’s wedding cake," she says in the release. Ptak opened Violet Bakery in 2010, and Markle once interviewed her about her baking skills for Markle's personal website, according to the royal family's official website. A wedding cake for 150 people is roughly $1,058 from Violet — for comparison, the average couple in the U.S. spends between $300 and $700 on a wedding cake, according to WeddingWire.

Of course, this is one of those situations where cost really isn't a concern. Prince William and Duchess Kate spent $80,000 on their wedding cake in 2011, and Meghan and Harry will likely be dropping some serious money as well. Bonus: It sounds like it'll taste really good. "Where the buttercream is sweet, the lemon curd is very tart. You get a really lovely thing happening when you take a bite, which is to get all of those flavors and sensations," Ptak says in the interview.

It isn't clear how many people the couple is expecting to feed, but based on a tweet from Kensington Palace, Saturday's reception will be quite the party. The cake requires 500 eggs — a cake for 100 people requires about 25 eggs, according to a recipe from BBC. Using that math, this cake could feed up to 2,000 people. The royal cake will also have 200 lemons, 44 pounds of butter, flour and sugar, and 10 bottles of elderflower cordial.

Even if you aren't normally a cake person, you have to admit that this looks pretty scrumptious. And if you're wishing you could try it yourself, you may be able to do so one day. People reports that slices of royal wedding cake from both William and Kate's and Charles and Diana's weddings are being auctioned for charity, and although the slices probably shouldn't be eaten, it'd still be a cool thing to have in your freezer. Most of us probably aren't willing to shell out thousands of dollars for inedible wedding cake, so we'll settle for pictures of Harry and Meghan's amazing cake. We won't have an idea of what the finished picture looks like until the wedding, but it'll almost certainly be worth the wait.