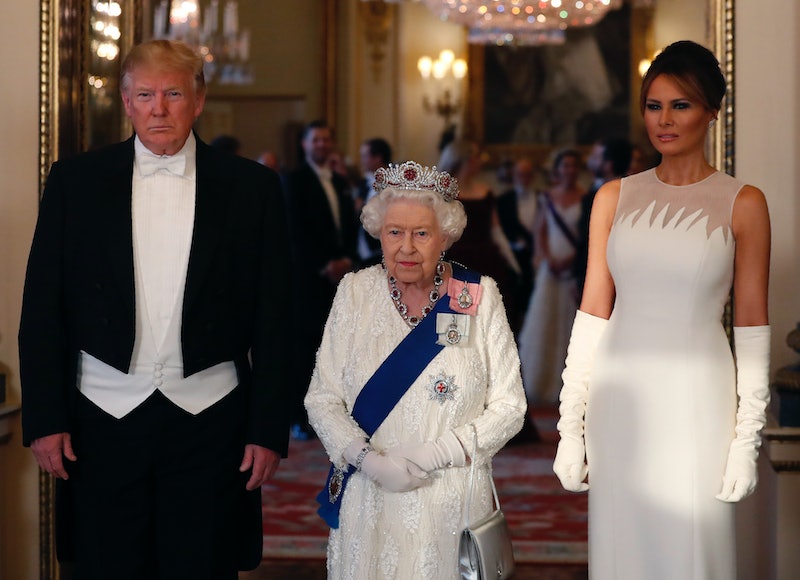 Donald Trump and First Lady Melania Trump are expected to spend a jam-packed three days attending meetings, ceremonial events, lavish dinners, and certainly a tea or two during the president's first official state visit to the United Kingdom. Trump touched down in London early Monday and was immediately whisked off to meet the Queen. In fact, photos of Trump's U.K. visit show he, Melania, and the royal family may be on their way to becoming old friends.

While Trump has visited the United Kingdom before — he and Melania met the queen last July — this is his first official state visit across the pond. But despite his history with Queen Elizabeth II, Trump's visit could get a little awkward, depending on who's in the room, given some of the controversial comments he made prior to his arrival.

Over the weekend, for example, Trump called Meghan Markle's previous criticisms about him "nasty" in an interview with British tabloid The Sun. The Duchess of Sussex is not expected to meet with Trump during his state visit as she is on maternity leave following the birth of her son, Archie, according to the BBC.

Then, hours before his plane touched down in the United Kingdom, Trump attacked London Mayor Sadiq Khan on Twitter, calling him "a stone cold loser" and alleging he'd done a "terrible job as mayor." Khan has been a vocal critic of the U.S. president and The New York Times recently reported that he'd granted protesters permission to fly a giant balloon float that depicts Trump as an orange baby during the president's visit.

Here's a look at how Trump's visit has progressed so far: