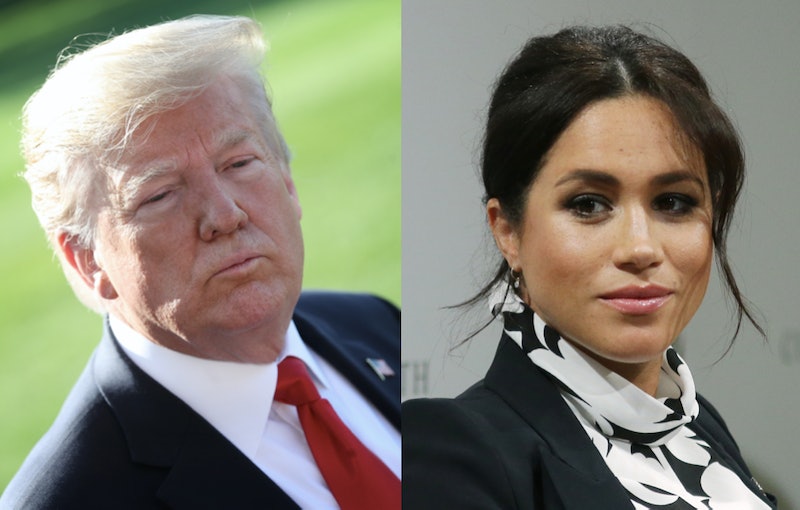 When you're as high profile an individual as President Donald Trump, it can be hard to keep track of everything that's ever been said about you, especially when you embark on something as chatter worthy as a presidential campaign. So it's not altogether surprising that Trump recently admitted he'd had no idea the Duchess of Sussex had once called him "divisive" and "misogynistic." In an interview with British tabloid The Sun, Trump called Meghan Markle's remarks about him "nasty."

Markle's criticisms of Trump had come during an interview on The Nightly Show with Larry Wilmore in May 2016 — long before her engagement and subsequent marriage to Prince Harry in 2018. "Of course, Trump is divisive," she said, per The Independent. "Think about just female voters alone. I think it was in 2012, the Republican Party lost the female vote by 12 points. That's a huge number and with as misogynistic as Trump is and so vocal about it, that's a huge chunk of it."

The actress argued that Trump "made it easy to see that you don't really want that kind of world that he's painting." She went on to say that she might permanently relocate to Canada, where, at the time, she filmed the TV show Suits, should he be elected.

In comments to The Sun, Trump countered Markle's comment about fleeing to Canada by saying "a lot of people are moving" to the United States. However, he went on to say he was sure Markle would do "excellently" in the royal position her marriage to Prince Harry had placed her in. "She will be very good," he said.

On Saturday, a Twitter account managed by Trump's 2020 campaign attacked a number of news sites, including CNN, for what it argued was the outlets' misrepresentation of Trump's comments. "Fake News CNN is at it again, falsely claiming President Trump called Meghan Markle 'nasty,'" the account tweeted along with audio of the president's interview with The Sun. "Here is what he actually said. Listen for yourself!"

However, as the Hill has pointed out, several Twitter users pushed back on the Twitter account's "Fake News" claim, arguing that both the audio recording and transcript of the interview verified Trump's use of the word "nasty" when discussing Markle.

While Trump is not scheduled to meet with Markle during his upcoming three-day state visit to the United Kingdom, he told The Sun that he's expecting to meet with the Queen and Prince Charles. The president also said he hoped that his children could arrange what he called a "next generation" meeting with Prince William, the Duke of Cambridge, and Prince Harry, the Duke of Sussex. "I think my children will be meeting them. It would be nice," he said. "I am bringing some of the family. They are going to be there and we will be greatly honored by the trip."