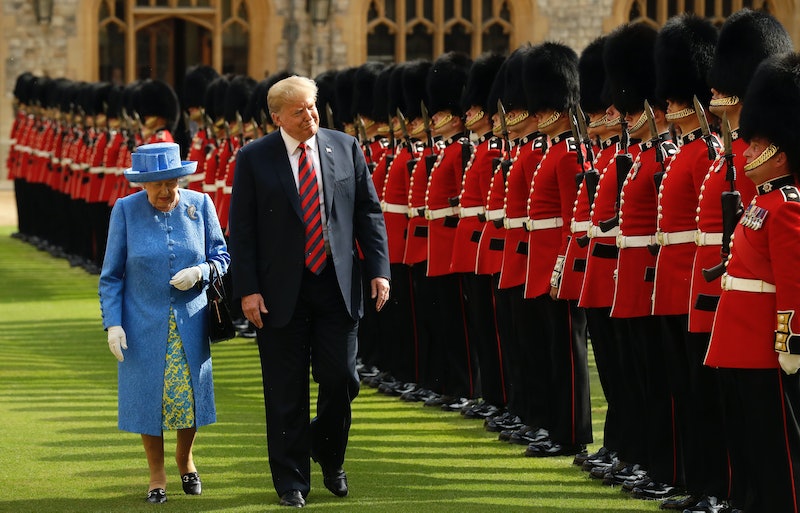 President Donald Trump capped off the official portion of his visit to the United Kingdom by joining Queen Elizabeth II for tea at Windsor Castle on Friday. Trump and first lady Melania Trump greeted the queen with handshakes before observing a brief, but no less pomp-and-circumstance-filled ceremony involving a review of the Queen's Guard of Honour and a rendition of the U.S. national anthem.

After arriving on the Windsor Castle grounds via helicopter, the Trumps were whisked by car to the castle's Quadrangle where they met the queen at the dais at roughly 5 p.m. local time. Both the president and the first lady exchanged smiles and brief handshakes with the queen before standing alongside her as the honor guard's ceremony got underway.

While Trump had served up some controversial criticism of Prime Minister Theresa May during his U.K. visit, he's had nothing but praise for the queen. "I really look forward to meeting her," Trump told The Sun in reference to Queen Elizabeth. "I think she represents her country so well. If you think of it, for so many years she has represented her country, she has really never made a mistake. You don't see, like anything embarrassing. She is just an incredible woman."

Trump said his wife was also a "tremendous fan" of the British monarch.

Shortly after shaking hands with the queen, both the president and the first lady stood solemnly with their hands placed over their hearts as the Coldstream Guard of Honour band played the U.S. national anthem. The queen, stood respectfully between them with her hands clasped in front of her. Prince Philip, Duke of Edinburgh and the queen's husband, was not present for the meeting.

The president and the queen then stepped down from the dais to inspect some of the troops that comprise the Guard of Honour and observe them march, something Sky News said a visiting foreign leader would have done with the Duke of Edinburgh. According to CNN, "the queen appeared to briefly herd the president" at one point, "gesturing for him to walk."

Approximately 10 minutes after their arrival, President Trump, the queen, and the first lady headed inside Windsor Castle where they were expected to sit for a traditional afternoon tea. According to Sky News, the queen posed briefly inside Windsor Castle's grand corridor for a photo with President Trump and the first lady. From his smile, it appeared Trump was truly enjoying the visit.

With their meeting running over by roughly 15 minutes or so, the president and the first lady spent just under an hour in total at Windsor with the queen, Sky News has reported. On his exit from the castle, Donald Trump opted not to hold Queen Elizabeth's hand, something he has been seen to do on multiple occasions with British Prime Minister Theresa May.

Queen Elizabeth has met nearly a dozen American presidents during her reign, including multiple meetings with former President Barack Obama and his wife, Michelle Obama, from 2011 to 2016. Her Majesty met her first U.S. president (Harry Truman) in 1951, a few months before she became queen. She would go on to meet Dwight D. Eisenhower, John F. Kennedy, Richard Nixon, Gerald Ford, Jimmy Carter, Ronald Reagan (who, interestingly, was the first U.S. president to stay overnight at Windsor Castle, according to Time), George H.W. Bush, Bill Clinton, and George W. Bush.

The palace has not yet released any information regarding what topics the Trumps and the Queen discussed over tea nor what they were served or in which room the tea was held. Following tea with the monarch, the president and the first lady departed for Scotland, for what Downing Street has described as "a private element of the official visit."