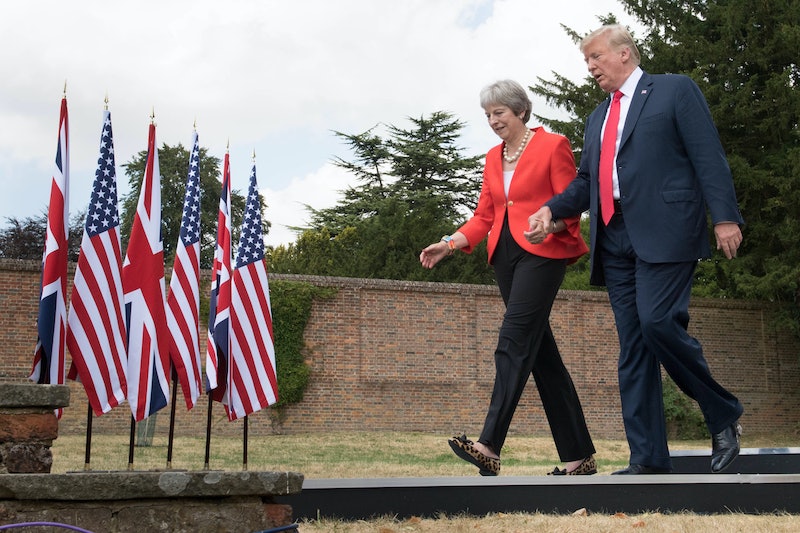 President Trump and British Prime Minister Theresa May held hands during their meeting on Friday — and as bizarre as that may seem, it wasn't even the first time it's happened. Photos of Trump and May holding hands in recent months show this PDA has become something of a habit for the two leaders. But is there something more behind Trump's repeated grabbing of May's hand or is this just what the U.S.' "special relationship" with the U.K. looks like now?

Although he's been in the United Kingdom for less than two whole days, Trump has already been photographed holding May's hand not once, but twice. On Friday, Trump was seen gripping May's hand as the two made their way down a small set of stairs on their way to give a joint press conference at the prime minister's country estate, Chequers.

The two had also been photographed holding hands the night before when Trump reached for May's hand as they began to walk up the stairs to the entrance of Blenheim Palace. The resulting hand-hold was brief and ultimately ended in an awkward clasp of fingers as May fell in step behind Trump in what appeared to be a subtle attempt to pull her hand free.

Trump dominated media headlines in January 2017 after he was photographed reaching for May's hand as he walked with her along the White House colonnade shortly after giving a joint press conference. In that incident, Trump was also seen patting his and May's clasped hands with his free hand.

At the time, Downing Street played off the Trump's hand holding as a "chivalrous gesture," the Independent reported. A spokesperson told the newspaper there had been a ramp on the colonnade and Trump "offered his hand, which she took as they stepped down the ramp."

More recently, however, Bloomberg has reported that May's advisors were actually "astonished" by the incident and feared it would place the prime minister too close to Trump, who has largely been seen as a controversial and divisive politician both at home and abroad.

And a close up of that.

Some British and American news outlets have previously suggested that Trump's hand holding stems from a fear of falling or tripping on ramps and stairs. But a few months after her January 2017 visit to the United States, May dismissed such speculation in an interview with Vogue and echoed Downing Street's initial characterization of their hand holding.

"I think he was actually being a gentleman," the magazine quoted the prime minister as having said, with a laugh. "We were about to walk down a ramp, and he said it might be a bit awkward."

Whatever the reason behind it, Trump and May's hand holding becomes especially awkward when you consider how uncomfortable it appears to make May. Patti Wood, a body language expert and author of Snap: Making the Most of First Impressions, Body Language, and Charisma Patti Wood told Refinery29 that May's body language seemed to suggest she wasn't happy about having to hold Trump's hand.

"A handhold like this, it shows that they're not totally joined an in sync," Wood told Refinery29 about Trump and May's recent hand holding at Blenheim Palace. "And the laughter, with the way she's holding her head down, could indicate anxiety or nervousness."

Wood said May had also appeared uncomfortable with Trump's holding of her hand in 2017. "It's a really unusual hand hold," she said. "To me, it shows that she's trying, with decorum, not to interlace their hands, to keep them from entwining. But she's doing everything nonverbally to show that she's not happy with it."

Body language analyst Judi James also echoed the idea that May wasn't keen on holding Trump's hand, She told the U.K.'s iNews she saw little affection behind the hand holding on May's part and that the incidents "looked driven by practical needs rather than actual bonding."

Whatever the motivation behind Trump's repeated reaching for May's hand, the president wisely opted not to attempt to hold Queen Elizabeth II's hand as he walked down the stairs at Windsor Castle with her Friday evening.