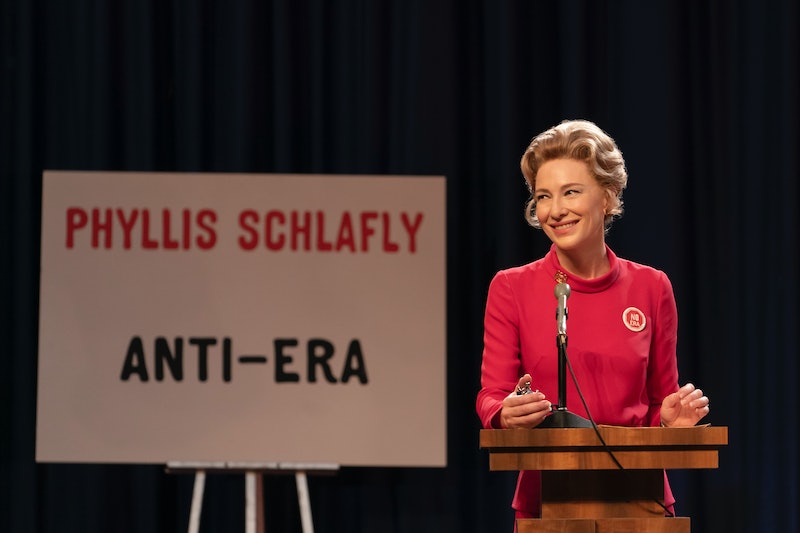 The most recent episode of FX on Hulu's Mrs. America opens in April of 1977. Thirty-five of the requisite 38 states have ratified the Equal Rights Amendment, and its loudest opponent, Phyllis Schlafly, is in New York to drum up support for her spoiler movement. After a luncheon speech, a man posing as a waiter smashes a pie in Schlafly's face — a deliciously fitting act of dessert-based protest. In an earlier episode, Schlafly advertised her cause by hand-delivering home baked bread to Illinois legislators. Her supporters’ slogan’s included “Preserve us from a congressional jam; vote against the ERA sham” and, even more presciently, “I am for Mom and apple pie.”

In real life, the pie-smash incident was significant enough to make the pages of the New York Times, and only a few of the details were rearranged for television. Schlafly really was hit in the face with an apple pie during a reception at the Woman’s National Republican Club by the prolific activist Aron Kay. Ordinarily, he preferred cream pies for maximum splatter, but in Schlafly’s case considered apple the apt choice. As Kay explained at the time, “it was in the tradition of motherhood.”

Kay, a member of the anti-war Youth International Party, would go on to throw protest pies for over 20 years, targeting Jerry Brown, Gordon Libby, and even William F. Buckley. He became involved with a group called the Agents of Pie-Kill Unlimited, a pie-for-hire service that would target anyone for $50. “I did a wedding,” Kay told Huck in 2018 of one of his non-political marks. “Although that one I kind of regret because I don’t want to ruin a happy time.”

Still, Kay counts Schlafly among his favorite victims. “I got Phyllis Schlafly, she was an anti-feminist; a woman against women!” he recalled in the same interview. “I said to her: ‘that’s for the Equal Rights Amendment’ and I walked right out of there.” Kay has since retired.

For Schlafly's part, apple pie was hardly the most objectionable thing she ever had thrown at her. In an entirely separate incident, the conservative rabble rouser was doused in pig’s blood. But if Schlafly was embarrassed by the mid-afternoon pie-ing, she certainly tried to downplay it. She cheekily told one reporter, “I wouldn’t want you to think the people who oppose my views to this extent are really total slobs because I appreciate they didn't pick cherry pie — that would have stained my dress.” Twenty-three years later, reflecting on the incident in a blog post, her daughter Anne Cori Schlafly doubled down on the humor, signing off with her own personal recipe for apple pie.