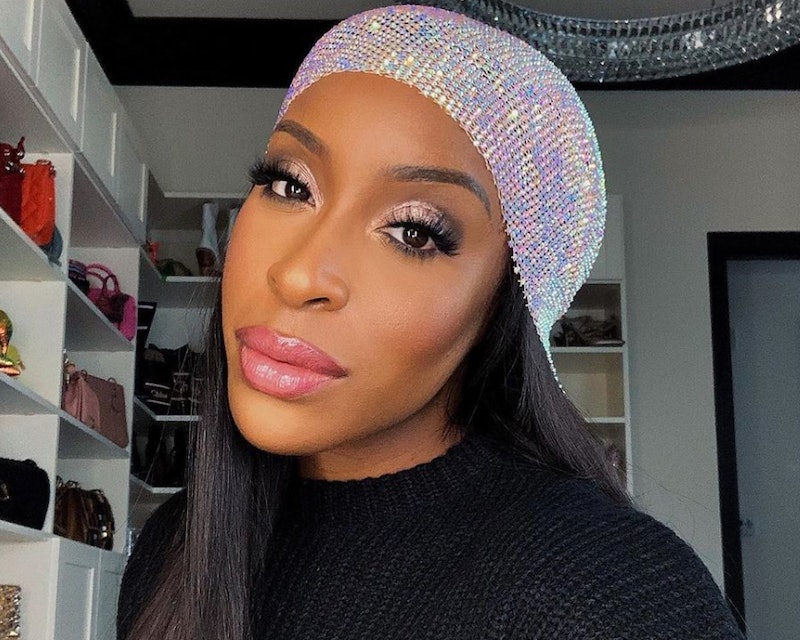 If beloved beauty influencer Jackie Aina ever experiences a power outage while filming one of her signature makeup tutorials, her epic engagement ring can light the way. Jackie Aina's engagement ring is absolutely massive and is one of the most statement pieces of jewelry you will see all day, all week, and possibly all year.

Aina, who recently collaborated with Anastasia Beverly Hills on an eyeshadow palette that was designed to work with dark skin tones, is now engaged to her longtime boyfriend Denis Asamoah. The adorable duo was on vacation in Greece and celebrating her birthday when Asamoah popped the question. He documented the super romantic proposal — leading her up the steps while blindfolded, surrounding her with roses petals, candles, and more — on his personal Instagram. The whole scenario is enough to make you swoon. But that ring, though. It's huge and it takes up most of her finger. It's certainly unforgettable.

As People reports, Aina's engagement ring is a marquise-cut diamond. That means it has two points on each end and is elongated. The YouTuber shared a short but sweet video clip of the ring on her Instagram feed. Of course, she was rocking a major, millennial pink manicure and a stack of bangles, one of which was a Louis Vuitton bracelet, on her wrist. But nothing at all could attract your eyes or attention away from her ring.

Wow, right? While Aina's ring is quite large, it's also classic. It's totally acceptable if you pop by Aina's Insta feed every couple of days to admire her bling. According to the website of engagement ring retailer Brilliance, the marquise cut is also known as "the football-shaped cut, the boat-shaped cut, the eye-shaped cut, or the navette." The diamond's elliptical and symmetrical shape can make it look larger than it actually is. The cut elongates the wearer's finger, too. The Brilliance blog also noted that this particular diamond shape is somewhat rare.

Jackie Aina is known for rewriting the rules in the beauty blogger world and now when it comes to engagement rings. The YouTuber was also critical in helping Too Faced expand its Born This Way Foundation to include a wider range of shades. She has long been a committed champion of diversity and inclusivity. She doesn't shy away from calling out brands when they offer limited shade options for women of color. She is a trailblazer in many aspects of her life and her husband-to-be clearly chose a rock that suits her personality.

Aina is not the only super popular influencer to get recently engaged with a major rock. European YouTuber Nikkie Tutorials got engaged to her boyfriend while the pair was on a trip to Italy last week. Her engagement ring is also totally unique, since it features two thin bands of heart-shaped diamonds that totally matched her gradient and blinged out orange French manicure. Because of course it did.

With two of the most followed beauty influencers celebrating their engagements within days of each other, there's one thing undoubtedly on their subscribers' minds, and that's wedding day looks. Bring on the wedding makeup tutorials designed by each bride-to-be.