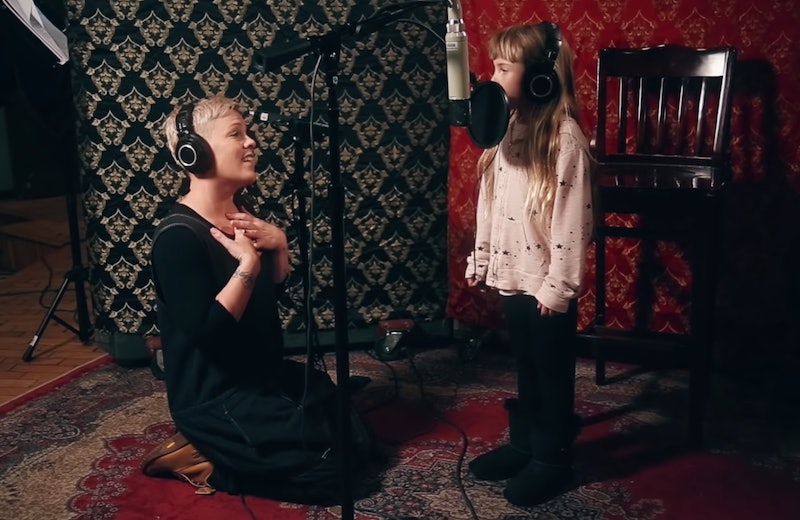 You better grab some tissues, because Pink and Willow Sage Hart singing "A Million Dreams" from The Greatest Showman will definitely bring tears to your eyes. On Wednesday, Atlantic Records' YouTube channel released a video of the mother and daughter's recording session for The Greatest Showman — Reimagined that's set to release on Nov. 16. The cover album already sounded amazing, but once you see Pink and Willow in action, you're going to wish you could download each song, stat.

Obviously, Pink and her 7-year-old daughter are bringing "A Million Dreams" to life. Pink is singing the full version of the song, whereas Willow is making her musical debut with the reprise. And get this: Willow is amazing! It really shouldn't be a surprise, especially since her mom is a singing sensation. These two were clearly the right choice.

On Oct. 9, Variety first reported about the all-star cover album, which will include some of the best artists singing the beloved songs from the hit movie. Some of the other musicians included are Kelly Clarkson singing "Never Enough;" Panic! at the Disco doing "The Greatest Show;" Sara Bareilles' version of "Tightrope;" and Keala Settle, Kesha, and Missy Elliott singing "This Is Me." For those unaware, Settle sang the original "This Is Me" and starred as Lettie Lutz in the movie, so it will be a real treat to hear her sing with Kesha and Elliott.

As you can watch above, the beginning of the video opens with some sweet interaction between Pink and Willow, who asks her mother, "What are you doing?" The singer replies, "Fiddling." Willow continues to pry why her mother is "fiddling," to which Pink answers, "Cuz I think it's fun." Pink can't help but laugh at her daughter, who she also tells, "I'm glad I had you." Seriously, they are so adorable.

You can also watch Pink coach her daughter through her recording session, and it makes for a wonderful mother-daughter moment. Pink even gives Willow two thumbs up. Oh, and just wait until you hear Pink belt out the song. You will immediately get chills.

"I grew up listening to Annie," Pink tells the film's songwriters, Benj Pasek and Justin Paul, in the video before adding, "And no one has done this for me, for my heart since I was a little girl. And to have her [Willow] finally have something like this ... You made our favorite movie ever."

And now here they are living a dream come true. To be able to watch Pink and Willow share this moment together is truly heartwarming and makes the movie that much more special.