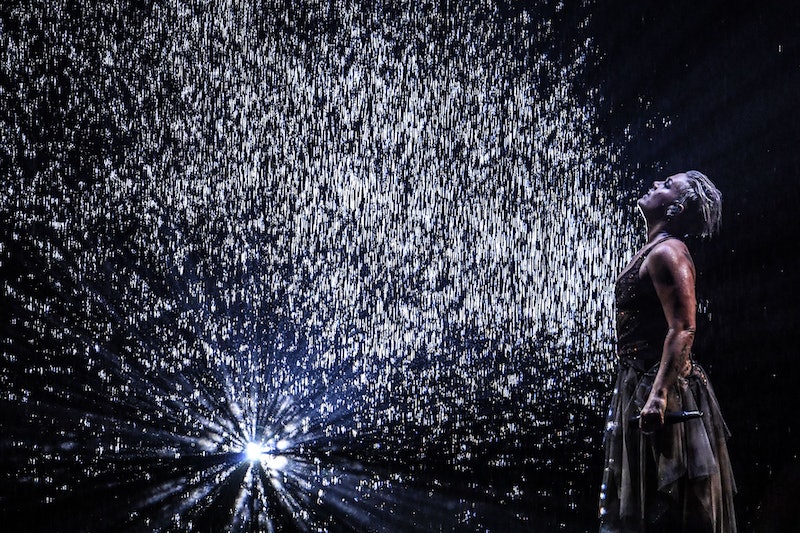 I don't know about you, but I was kinda waiting for Pink to majestically appear during Hugh Jackman's performance of "The Greatest Show" with a verse or two from "A Million Dreams." While that didn't happen, Pink's BRIT Awards performance was such a perfect choice for ending the show, especially after the singer was honoured with one of the biggest accolades of the night with the Outstanding Contribution To Music award.

Performing a medley of songs including her new single "Walk Me Home", "Just Like Fire," "Just Give Me A Reason," "Try," and "What About Us," Pink did just about everything from a small backstage narrative to her usual antics with fire and acrobatics. Partaking in a number of costume changes, Pink literally gave a journey of her career through this performance, which involved a surprise duet with Bastille's Dan Smith with backing vocals courtesy of students from The BRITs School, and a beautiful performative dance with additional water effects and projections. You couldn't ask for anything more, really.

Not to make you feel old, but Pink has been absolutely slaying the game for nearly twenty years. Rebelliously debuting into the pop scene among the likes of Britney Spears and Christina Aguilera, Pink has had over 8 million album sales in the UK and over 12 million single sales according to the official BRITs website. "I was never as big as Britney or Christina," she said in a profile piece for The New York Times. "If you look at any paragraph about pop music, I don't get mentioned — my name doesn't come up. And yet, here I go again, right under the wave, duck-diving."

Who knows, maybe it's thanks to her fans in the UK that she's found continued success. I mean, the singer has become "one of the UK's best-selling female artists" after all, which made the Outstanding Contribution Award even more fitting.

Presented by American singer and friend Khalid, Pink also made history in receiving the award as the first international artists to do so. "I bet it's hard for some of you to believe as well, but to be considered in the same category as David Bowie, The Beatles, Sir Elton, Sir Paul, Eurythmics and Fleetwood Mac... it's beyond anything my brain can comprehend," she said after accepting the award.

"I am so honoured to be recognised with the Outstanding Contribution To Music Award at the 2019 BRITs!" Pink previously exclaimed in a statement via the BRITs. "Since the beginning of my career the British fans have been some of the most fierce and loyal in the world. I am humbled to receive this honour and be in the company of an illustrious group of British icons!"

Jason Iley, BRITs Chairman and Chairman & CEO of Sony Music UK and Ireland added: "Pink is a trailblazer, a phenomenally talented singer and songwriter, and truly one of the greatest artists of our time. It is a real pleasure to honour her at this year's BRIT Awards with the Outstanding Contribution To Music Award."

"With her remarkable career spanning nearly 20 years, Pink is one of the most albums and selling out tours all over the globe. I am really excited to welcome her back to The BRITs and to recognise her prodigious success."

Yeah, I can't think of anyone more deserving of this award than Pink. Congratulations, girl!