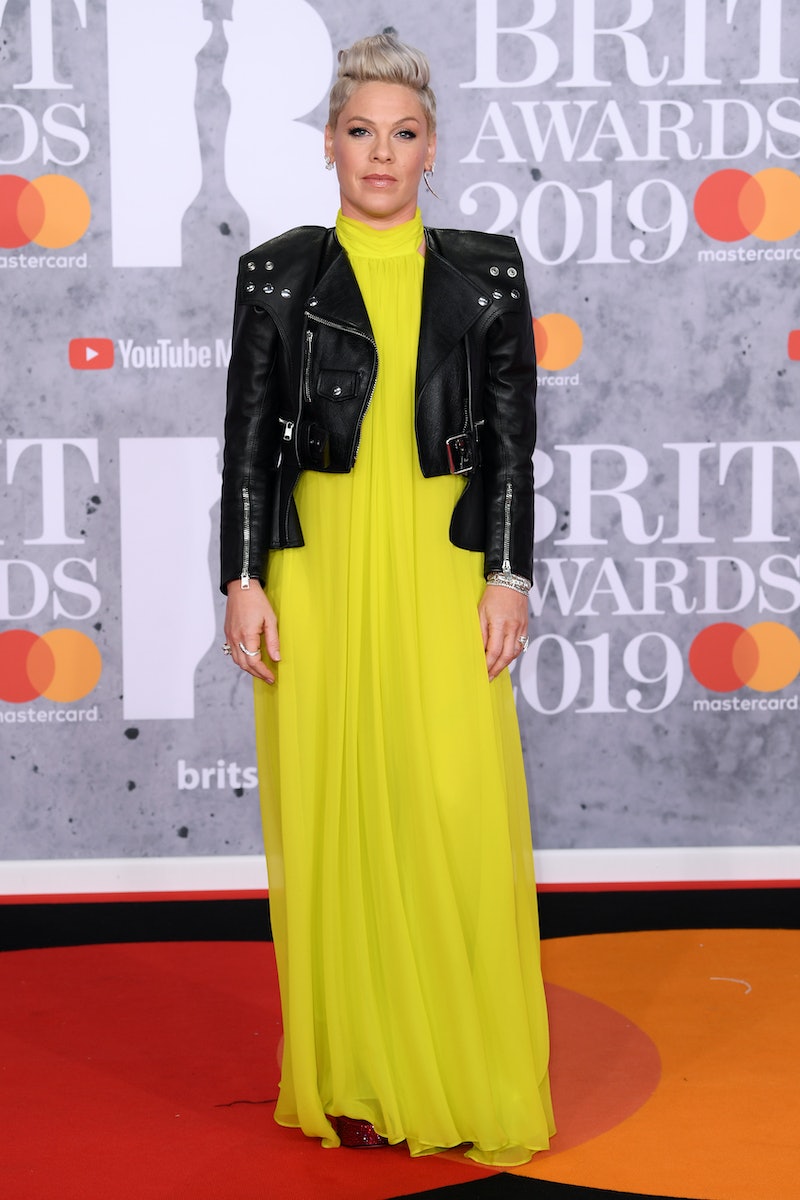 The stars are prone to revealing all kinds of juicy insights into their lives when they hit the red carpet. Maybe it's all the insistent reporters, the hype of it all, or just the free bar that makes them flappy at the jaw, but I've already learned so much from the celebs who have hit the red carpet at the 2019 BRITs. When "Beautiful Trauma" singer Pink came through with the goss, she kept it pretty quaint. She talked about the surprising hobby which keeps her occupied in her spare time, as P!nk revealed her secret talent, and it's made me fall in love with her even harder.

Speaking to Hits Radio in a clip posted on their Twitter from the red carpet, Pink told the reporter "I knit and I cook," when asked "Do you have a hidden talent at all?" For those who want to try it out themselves, the singer recommends that you "Just go on Youtube and watch a tutorial and gets some yarn." So, what's the best thing the unlikely knitting guru has twizzled up so far? "I make really good hats," she says. "Terrible blankets, but really good hats." I can't wait for Pink's line of knitted hats to be released. I want one in every colour, especially pink.

She also told the reporter that she gives those terrible blankets "to her two year old son who doesn't know the difference." Her son, Jameson Moon Hart, was recently captured taking after his motorcross champion dad Carey Hart, as he proudly posted an adorable clip of his and Pink's son zooming along on an electric bike.

"Jamo blows me away!!!! Today at the shop I broke out his @ridestacyc electric bike. Literally his first go he made it the length of my shop! I was a little nervous about the throttle, but he picked it up instantly. Not bad for 2 years old. Gonna have my hands full lol," Hart captioned the post.

Pink reportedly started knitting long before her son came along in 2017, though. During her pregnancy with her first child, Willow Sage Hart, Pink tweeted: "my friend @KerriKenney taught me how to knit this past week. this scarf i'm working on is so good i may just slap her with it. on her face," on Jul. 19, 2011. That means her knitting skills have been eight years in the making, so I'm expecting those hats to turn out super well.

As The Sun reported on Feb. 6, Pink will be taking home the award for Outstanding Contribution to Music, which in previous years has gone back to the gaffs of Robbie Williams, George Michael, and The Beatles, so she's certainly got big boots (or knitted hats) to fill. As The Sun also reported, she's also the first female solo artist to have been awarded the gong, after Annie Lennox brought one home in 1999 along with her Eurythmics band members. It's going to be a huge night for Pink and knitting clubs across the country.