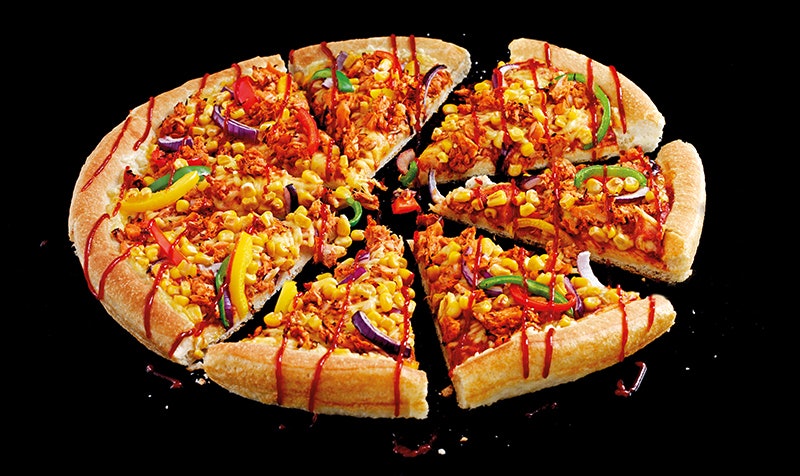 Excellent news for UK-based vegans today: Pizza Hut UK launched a jackfruit pizza that’s vegan-friendly, just in time for Veganuary. A yearly event since 2014, Veganuary encourages people to go vegan for the entirety of January, with the goals of “changing public attitudes” towards veganism and “providing all the information and practical support required to make the transition to veganism as easy and enjoyable as possible,” according to Veganuary’s official website — and in 2019, Pizza Hut UK is getting in on the challenge. The new jackfruit offering encourages pizza fans to “Cheat on Meat” this month, “whether you're vegan, veggie, pescatarian, flexitarian, anything-else-atarian, taking part in Veganuary, or just looking to try something new.” And, folks? Not going to lie: It sounds pretty tasty.

Pizza Hut UK first rolled out vegan cheese in November of 2017 following an extremely successful test run. “After an amazing customer response to our vegan cheese trial earlier this year, we’re pleased to announce that the dairy-free alternative will now be served in all of our restaurants nationwide and feature as a permanent fixture on our menus,” said Gareth Hopley, then Head of Communications at Pizza Hut Restaurants, in a statement to Plant Based News at the time. It does carry an additional cost — it’s £1 extra — but, as Hopley noted, “We’re excited that all of our cheese-loving vegan customers will be able to grab a slice of the action and no longer have to miss out.” The non-dairy cheese is made by Violife, whose offerings are composed primarily of filtered water, coconut oil, and modified food starches (typically potato and corn). Different flavorings allow the “cheeses” to ape the taste of varieties like mozzarella and cheddar.

And now, Pizza Hut UK has added a new option to their vegan menu in honor of Veganuary. Said Kathryn Austin, Director of HR and Marketing at Pizza Hut Restaurants, in a statement to Plant Based News, “Following the overwhelmingly positive feedback and awards we've won for our initial vegan range in 2017, we’ve responded to demand with a third vegan Pizza.” Officially called the Vegan Jack ‘N’ Ch**se pizza, this latest vegan creation piles tomato sauce, Violife vegan cheese, sweetcorn, red onions, peppers, jackfruit smothered in barbecue sauce, and an additional drizzle of more barbecue sauce on the crust of your choice. According to Vegan News, your crust options include Pan, All-American Thin, and Gluten-Free. The chain’s two previous vegan options, Vegan Veggie (with vegan cheese, tomato sauce, spinach, sweetcorn, peppers, red onions, and mushrooms) and Vegan Margherita (basically a plain, cheese pizza, vegan-style), also remain available — and of course, you can always build your own vegan pizza to your individual specifications, too.

Jackfruit’s history remains something of a mystery. According to the University of Hawai‘i at Mānoa’s College of Tropical Agriculture and Human Resources (CTAHR) and the U.S. Department of Agriculture, it’s believed to have originated in the southwestern region of India in ancient times and subsequently spread throughout Southeast Asia, tropical Africa, and the Philippines — but we don’t know for sure. A member of the Moraceae family, it’s related to figs, mulberries, and breadfruit. It grows well in warm, humid, tropical climates — which, as Epicurious observed in 2016, might turn out to be an important quality in the future as climate change decimates crops like wheat and corn.

Packed full of protein, potassium, calcium, and iron, jackfruit has long been a nutritious staple of south and southeast Asia. When it’s fully ripe, it’s sweet and somewhat reminiscent of mango and pineapple — but when it’s still green, it’s great for use in savory dishes like curries. Its versatility is a major selling point: Speaking to Epicurious, plant biologist Nyree Zerega recommended “[treating] it like you would any other starch — give it the flavor you want it to take on.” It also has a meaty heft to it — which, in recent years, has led American vegan recipes capitalizing on the hearty texture as a substitute for meat. Think vegan “pulled pork,” “shredded chicken,” and the like.