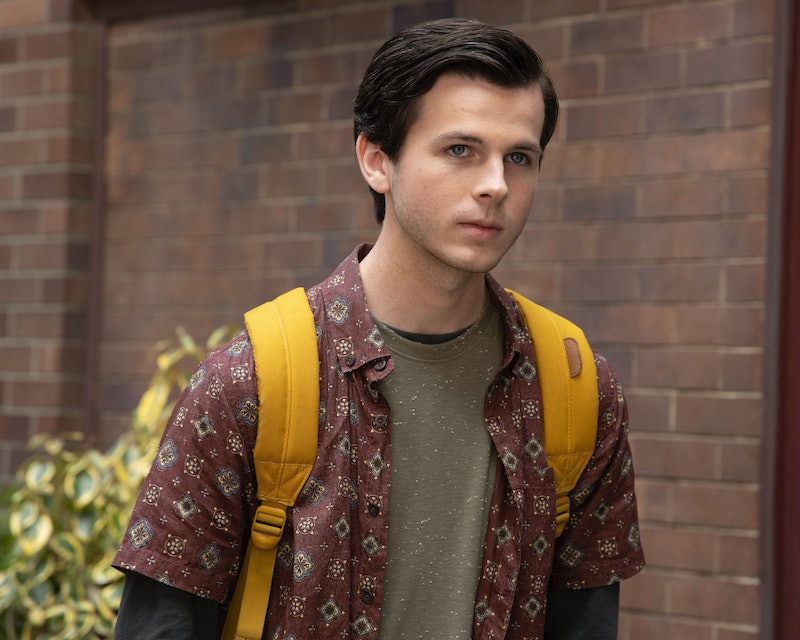 Spoilers ahead for A Million Little Things Season 2, Episode 7. Fans have long held onto the theory that Jon is PJ's father on A Million Little Things, and the Nov. 7 episode finally delivered proof. Rome and PJ had sent Jon's Harvard sweater to a DNA lab to match any hairs on the sweater against PJ's. The results came in on Nov. 7 and Jon is indeed PJ's dad. Rome and Regina had been holding off on making any decisions about what to do with that information until they knew for sure. Now that it's confirmed, they have a lot of decisions to make and things could totally change in their current friendship dynamic with Delilah.

On Thursday's episode, Delilah made the decision — against the advice of all of her friends — to keep lying about the identity of Charlie's real father. She doesn't want Sophie and Danny to be mad at her for cheating on Jon. But what she doesn't know is that Jon also has a secret child with someone else. In fact, his situation really paralleled Delilah and Eddie's own affair. Since Jon is PJ's dad and Barbara Morgan is his mom, that seemingly means they were together while Barbara was dating Jon's best friend Dave. Perhaps that's why Jon was so insistent in his final message to Eddie that Eddie and Delilah needed to "love each other."

After Dave's death, Jon felt so much guilt that he also bailed on Barbara and left her to raise PJ alone. He clearly didn't want Eddie and Delilah to have the same outcome of their affair.

Delilah doesn't know that, though, and she's sitting in all the guilt alone. It's understandable that she doesn't want her children to be upset with her about her being with Eddie. But creator DJ Nash has said that PJ's storyline is meant to serve as a cautionary tale for Delilah about not choosing to tell the truth. Here's a kid who was lied to about his father his whole life, and it's caused him a lot of pain. "The whole purpose of seeing a 20-year-old unaware of his paternity and struggling with the fact that he’s been lied to is very intentional," Nash told Hollywood Life. "It sets up this cautionary tale for Delilah and Eddie, who are also keeping a paternity secret. Throughout the season, we will be paralleling those stories and having our group of friends watch PJ struggle with just wanting to know the truth."

Surely Delilah doesn't think she can keep Charlie's true father a secret forever. It's more of a matter of when will the truth come out, not if. And, the longer she lies, the more that lie may hurt those she loves. Speaking of which, now that Rome knows the truth about PJ's dad, he's going to have to decide if he will tell PJ the truth and then if he will also tell Delilah. For Rome, seeing how PJ has struggled, he will likely give him the DNA results. As for telling Delilah, it does seem like she will find out — and that will further complicate her decision about Charlie.

In an interview with TV Guide, Nash elaborated that "as Delilah and Eddie watch this young man make choices that are probably not correct and struggle with the fact that his fraternity was kept from him, [that] will inform their decision of what to do that with their child." Based on the quote, it seems like PJ may be the only person able to change Delilah's mind. It also seems like, because PJ was forming a bond with Sophie, he may open up to her about their sibling status and shatter her illusion of her father anyway. At that point, Delilah's secret won't be that much bigger or worse.

However all of this unfolds, there's no denying that it will change the friend group forever. It will also color their memories of Jon further to learn that he probably knew about PJ but chose to ignore that situation. But if any good can come out of this, at least PJ will know the truth and maybe some day soon Charlie, Sophie, and Danny will too. It may get messy in the meantime, but don't worry too much. Nash promised to Hollywood Life that PJ's parentage reveal and resolution "actually makes for a beautiful midseason finale." So fans should probably get ready to happy/sad/bittersweet cry now.

More like this
'Stranger Things' Finn Wolfhard Is “Proud” Of Noah Schnapp For Coming Out
By Sophie McEvoy
Melanie Lynskey Plays A “Ruthless Leader” In 'The Last Of Us'
By Brad Witter
Grammys Host Trevor Noah Made Adele's Dream Of Meeting The Rock Come True
By Brad Witter
Pedro Pascal Barely Got Through The "Lisa From Temecula" 'SNL' Sketch
By Stephanie Topacio Long
Get Even More From Bustle — Sign Up For The Newsletter
From hair trends to relationship advice, our daily newsletter has everything you need to sound like a person who’s on TikTok, even if you aren’t.