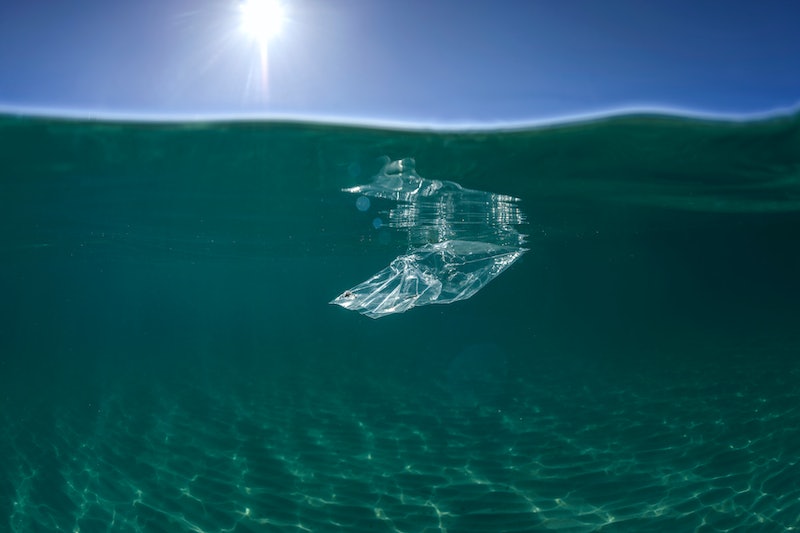 One of the most harrowing statistics about plastic pollution is that there will be more plastic in the ocean than fish by 2050. But it looks as though that prediction has sadly come true sooner than first expected for some parts of the world, as a new study has shown that, in the waters off Hawaii's coast, plastic currently outnumbers fish seven to one.

The research looked into “slicks,” which are “convergence zones that look like strips of smooth water,” according to the marine life magazine Oceanographic. Slicks act as nurseries for the small fish and are full of plankton and other nutrients, the magazine explains, and, according to the marine ecologist for NOAA who co-lead of the study, Dr. Jonathan Whitney, they also "concentrate lots of planktonic prey, and thereby provide an oasis of food that is critical for larval fish development and survival."

Not only are the baby fish in Hawaii being outnumbered by plastics, but they are also ingesting them too. Speaking to BBC News, Dr Gareth Williams of Bangor University, another researcher on the team, said:

"We don't have the data to say whether or not this has a negative effect on fish populations, but the fact that they're eating these non-nutritious particles at the point when eating is so critical for their survival in those first few days, it can only be a bad thing."

Dr. Jamison Gove, a research oceanographer for NOAA, said it was “alarming” that larval fish were surrounded by so much plastic.

He continued: “Biodiversity and fisheries production are currently threatened by a variety of human-induced stressors such as climate change, habitat loss, and overfishing. Unfortunately, our research suggests we can likely now add plastic ingestion by larval fish to that list of threats.”

Because microplastics are less than five millimetres, it’s easy for marine life to consume them instead of food. And microplastics getting into the food chain doesn’t just affect marine life, as they can eventually make their way into our food, to. In fact, humans on average are eating a credit card’s worth of plastic each year, according to a study from the World Wildlife Fund. The long-term effects of human consumption of plastics still aren’t known yet either.

More like this
Gen Z Are Twice As Likely To Identify As Queer, According To New Data
By Sam Ramsden
Ben & Jerry’s New Sundae Flavours Are A Chocoholic’s Dream
By Sophie McEvoy
What The UK Blocking Scotland’s Gender Recognition Bill Means
By Sam Ramsden
90 Epic Truth Or Drink Questions To Play 'Say It Or Shot It' With
By Bustle UK
Get The Very Best Of Bustle/UK
Sign up for Bustle UK's twice-weekly newsletter, featuring the latest must-watch TV, moving personal stories, and expert advice on the hottest viral buys.