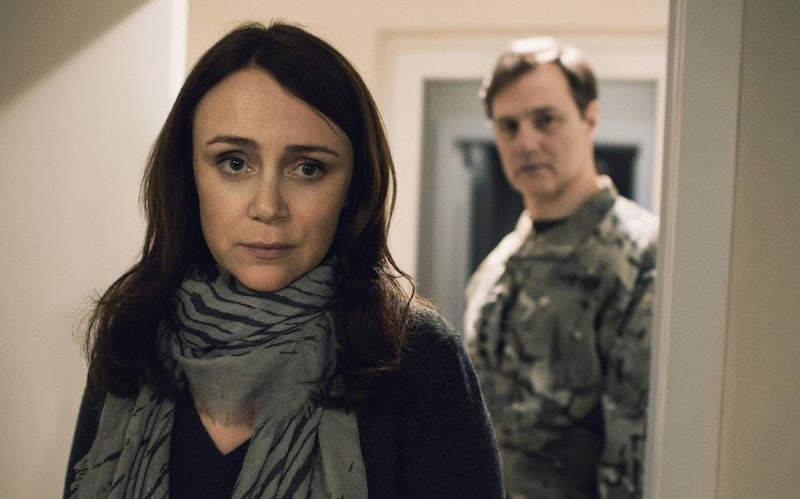 If you're anything like me, you've been devouring every single episode of The Missing on STARZ — and counting down the minutes until the series finale airs on Sunday, April 2. At long last, we'll get the answers to our burning questions... right? Personally, I lack the emotional strength to handle a finale filled with loose ends. Luckily, we don't need to worry — in an interview with Bustle, Keeley Hawes, who stars as Gemma on The Missing, promises that the Webster family's story will be "resolved really beautifully."

Until The Missing, Hawes avoided TV shows and films that focused on missing children. As a mother of three, she says the idea "hit too close to home." But when she received the scripts, Hawes didn't know what the show was about — so she immediately dove in and was instantly riveted by the plot. "I literally read it like you would read a brilliant book that you cannot put down," she recalls. "Of course on one level it is about a missing child, it’s about an abduction, and all those horrible things that make you think of your own children. But it’s also a thriller and whodunnit, and it has so many other levels. And it’s really beautifully and delicately done as well."

Still, Hawes says there was really no way to mentally prepare herself for the role of Gemma. "The preparation was all in the writing, and learning the backstories of the characters and their relationships," she says. The plot shifts between 2003, 2014, and present day, as the Webster family is taken on the most horrifying emotional roller coaster you can imagine. Hawes describes it as one of the biggest journeys she's ever taken as an actor.

"One of the things that I liked so much about [Gemma] when I first read the script was when we meet her, she’s just broken and they’re a broken family. They’re just doing their best to get through the day. Their daughter is gone and they’re in no man’s land; they don’t know what happened to her, and they’re just living their lives mostly for their son," she says. "They're trying to make some sort of life without their daughter, and they don't know what happened to her. Then of course, she reappears, and the thing that I love is that Gemma found this strength and she grabbed onto it because she has this maternal instinct that it's not really Alice."

Gemma's husband Sam can't find that same strength, and it drives a wedge between the couple. "David [Morrissey] had a very difficult part to portray because obviously as a viewer, everyone’s thinking 'you’d know it’s not her,'" Hawes says. "But he had to play a father that went against his instincts and Gemma’s instincts, because he so badly wants it to be Alice. He just wants an end to the nightmare."

Because Sam is in denial, Gemma takes matters into her own hands and refuses to stop searching for her real daughter. "She's the one who pushes through it because of her instincts. She's even desperate for it not be her daughter because she knows in her heart that it isn’t," Hawes says. "She'd rather know that and get the truth, whatever the horrible truth may be, than live with this girl who she can hardly look at because she’s not experiencing any of the maternal feelings that she’s desperate for."

The Missing arguably belongs to Gemma — and it's part of an encouraging trend in which more and more TV series are lead by strong, multi-faceted women who are far more than simply "the wife" or "the girlfriend."

"I’ve noticed a huge change in the U.K. There have been so many brilliant shows lead by women," Hawes says. "Behind the scenes, there’s still nowhere near as many female directors or writers. That could use a great deal of improvement, but certainly there are more roles for women than before."

It's been confirmed that a third installment of the anthology series is highly likely, but Hawes says it's unlikely that she'll return. "I think one of the wonderful things about the finale is that it ties up the storyline so well. It’s resolved really beautifully, so I think they'd have to be very, very careful about bringing any of us back." But she hasn't ruled out the possibility entirely. "The writers are just brilliant, so it really depends. Never say never."

Regardless of whether or not Hawes makes an appearance in Season 3, her incredible performance as Gemma will remain one of the best aspects of an amazing series.

More like this
Keeley Hawes Had A Very Personal Connection To 'Crossfire's Filming Location
By Sophie McEvoy
'Firefly Lane' Season 2 Will Be The Show's Last — But There's A Twist
By K.W. Colyard and Grace Wehniainen
'The Rings Of Power' Episode 7 Will Feature An “Unlikely Pairing Of Characters”
By Grace Wehniainen
The ‘Kevin Can F**k Himself’ Season 2 Finale Twist Is A Full Circle Moment
By Grace Wehniainen
Get Even More From Bustle — Sign Up For The Newsletter