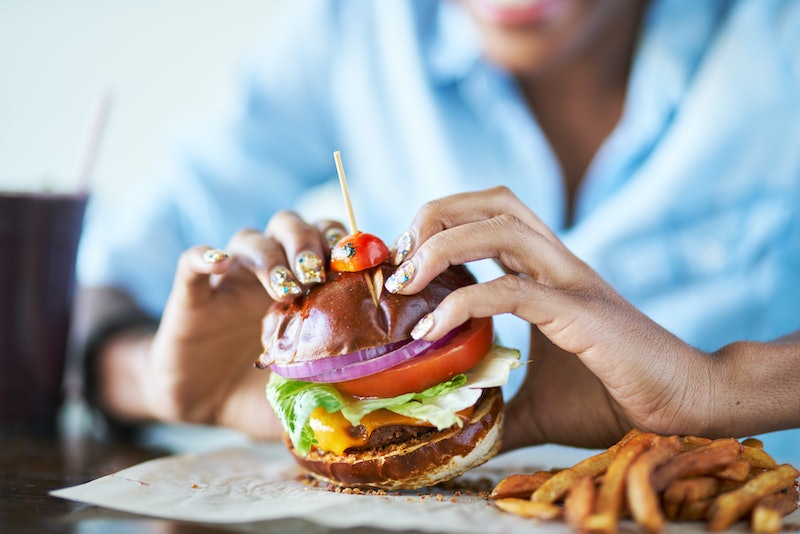 Most people would agree, in 2018, that diet culture is pretty toxic. Where 20 years ago, you couldn’t escape hearing about Atkins, South Beach, or other infamously low-carb diets, today you have influencers Instagramming photos of their artfully curated grain bowls, paired with captions about fueling your body. “Mindful eating” is now a regularly understood term among not just the wellness set, but with your parents, too (who probably learned the term as “eat until you’re full”). In an era of body positivity, the idea of nourishing yourself with the goal of weight loss has become an unpopular opinion to the point of being nearly taboo — which is a good thing, to be sure, after millennia of women being told to make themselves smaller at all costs.

But the truth is, even with this incredible positive push toward improving our relationships with food, Americans are still making “lifestyle changes” that control or restrict what we consume — a diet, by any other name — with carbs being a particularly notable source of ire. According to Forbes, the number of Americans who don’t eat gluten tripled from 2009 to 2017 — and nearly three-quarters of those people acknowledge that they don’t have any kind of gluten sensitivity at all. Meanwhile, eating plans like the ketogenic diet — where participants eat a specific ratio of fat (high) to protein (low-ish) to carbs (very, very low) in order to trick their bodies into relying on ketones, not glucose, for energy — has exploded in popularity in the last five years, with Google search frequency for the term “keto diet” increasing nearly 5,000 percent from 2013 to 2018.

In 2018, our culture is more food positive than ever. So why are we still vilifying carbs? Because we've been doing it for a long freaking time.

“Carbohydrates have had a hard road,” Jessica Shafer, a registered dietician, tells Bustle. “They’ve never been the nutrient that’s en vogue, in the way that […] there was never anything wrong with getting high amounts of protein.” Shafer points to Letter on Corpulence, Addressed to the Public by William Banting, a booklet published in 1863 that espoused the benefits of a low-carb diet. "I partook of the simple aliments of bread, milk, butter, beer, sugar, and potatoes more freely than my aged nature required," Banting wrote, attributing his health to avoiding these "starchy or saccharine" foods. This was the standard set by what some consider to be the world's first diet book, which persists to this day.

Dana Murrell, executive chef at Green Chef, a meal kit delivery service, points to the popularity of Atkins through the early aughts as something that’s stuck in our culture even today. “At that time, we saw more and more people opt out of everything from tableside bread to hamburger buns at restaurants, while adding bacon and cheese to their burgers to compensate for the bread,” she tells Bustle. "In the past year, the Keto diet, which is very similar to Atkins, has really begun to gain mainstream attention as a new generation has begun to focus on what they eat," she says, with the end result being that we're in a decidedly "anti-carb consumer market" right now.

“A lot of my clients don't realize [that] fruits and vegetables are considered carbs.”

“It's like every five years there's some new diet that's en vogue and really, it's based on lowering the amount of carbohydrates that you're eating,” Shafer says. But just because it's perpetually trendy to avoid carbs doesn't mean it's actually good for you.

Part of the issue around our culture’s antipathy toward carbs has to do with the vast amount of misinformation around them. “Foods are not just carbs, they’re not just fats,” says Shafer. “Most foods are a composition of several nutrients, and so to call something a carbohydrate […] isn’t giving a true picture of all the nutrition that you're getting out of a food.” (For what it's worth, Shafer notes that butter is an exception in that it's almost pure fat — so, no, butter is not a carb.)

“A lot of my clients don't realize [that] fruits and vegetables are considered carbs,” Nancy Gandolfo, a registered dietitian and certified dietitian-nutritionist at the Mountainside Treatment Center, tells Bustle. “It’s not just pasta and bread.”

We often tend to think of carbohydrates as just being simple carbs — white flour, white sugar, pasta, bread — and that simple carbs are “bad” for us. But, there’s way more to the story than that. Typically, complex carbs — whole grains, fruits, vegetables — are considered "healthier" because they have a higher nutritional content than simple carbs, which are often processed. But, as Shafer puts it, that distinction isn’t helpful if, for example, you’re craving a cookie but stop yourself from eating it because it’s not considered "healthy;" instead, you snack on different, “healthy” snacks, but aren’t satisfied until you actually eat the cookie. “It would have been better in that scenario to just go directly to this thing that your body was craving in that moment,” she says.

But even though that rationale, which is ultimately the philosophy behind mindful eating, is common sense, low-carb diets are still everywhere. Another reason for this may have to do with the persistent, untrue belief that low-carb diets trick your metabolism into losing weight faster than it would with another diet. This theory, called the carbohydrate-insulin hypothesis, has never been proven, as Vox wrote in June. More importantly, however, when we associate low-carb diets with weight loss, and therefore with health, we're buying into an incorrect and problematic belief that weight loss (and thinness) is a direct indicator of health — which it isn't, at all. And further, avoiding carbs — for whatever reason — can have negative health consequences itself.

“We need carbs for energy,” Gandolfo says. “If you don't have enough carbs, or any carbs, you’re going to feel lethargic, tired, fatigued, if not actually nodding off.” Carbs also deliver dietary fiber, which can help keep digestion regular and feeds good gut bacteria, as well as decreases bad cholesterol. Carbohydrates are also positively linked to your brain's levels of serotonin, Gandolfo says, “so another reason to eat carbs is to improve your mood.”

“Right now, the world is just so anti-carb.”

Carbohydrates, on top of being good for you on their own, also help deliver other macronutrients (fat, protein) and essential micronutrients (vitamins and minerals) through the food they're a part of. “I think some of the people who vilify carbohydrates think of them as breaking down into sugars, but that's really paring down what a fruit provides to just one thing, when a fruit provides antioxidants and vital nutrients,” says Shafer. A cup of spinach has 3.6 grams of carbs and 2.9 grams of protein, according to Healthline; a slice of pizza, according to Livestrong, has 33.56 grams of carbs and 15 percent of the calcium you need for the day.

Even when people are aware of the benefits of carbohydrates as part of a well-balanced diet, however, the cultural sense of guilt can still persist.

“Right now, the world is just so anti-carb,” says Nicole Cogan, a wellness influencer and founder and CEO of No Bread, a website that compiles celiac-friendly city guides. “Every time I eat a carb, even though I’ve accepted that I need carbs, I still feel guilty. Like, shouldn’t I at least be trying to do no grain or paleo?" Cogan, who has celiac disease, tells Bustle her diagnosis reaffirmed her love of carbs. “I was literally a walking carb before going gluten-free, which explains why I was so chronically sick my whole life. So, when I had to go gluten-free and so many carbs were removed, it made me beg for gluten-free alternatives. I was like, 'No, I still want [carbs]’.” But switching to an eating plan that adjusted her carb intake radically changed her relationship with food. “I voluntarily did keto last year and you couldn’t have any carbs, not even vegetable carbs,” she tells Bustle. Doing keto, she says, “made me hate food, because food was no longer something to be enjoyed, it was something to be calculated."

This isn’t to say whatsoever that eating plans that restrict carbohydrates are “bad,” or necessarily less healthy than a standard eating plan. If anything, the principle of mindful eating should tell us that if eating fewer carbs makes you feel better than eating more, then that's probably something your body is down with. But each expert Bustle spoke with for this story agreed that carbs aren't the enemy of healthy eating; it's our problematized relationship with food that's ultimately hurting us.

“Food is a very beautiful thing in our lives that means so many things to so many people,” Shafer says. "It's important that we look at food as an enjoyable part of being a human being."