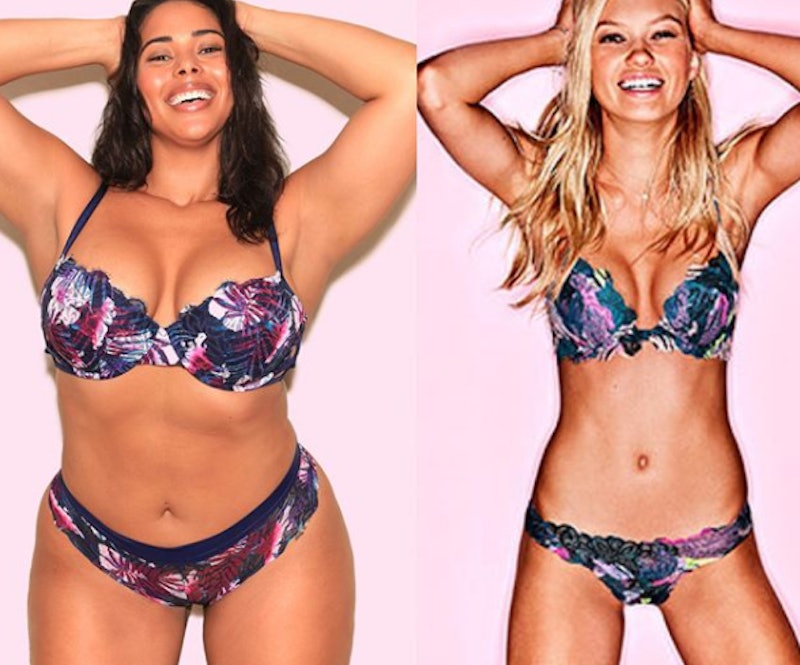 While more and more plus-size women are being represented in ad campaigns, media, runways, and billboards, the fight towards more body inclusivity and diversity is far from over. Case in point: While some brands like Aerie and Lane Bryant are working hard to represent different kinds of body types in their lingerie collections and campaigns, there are still an overwhelming amount of brands, like Victoria's Secret, that have not made the jump yet. These brands are holding on to the tired idea that only certain kinds of bodies are allowed to be sexy. And that's where model Tabria Majors' recreated Victoria's Secret ads come in. She's tangible proof that everyone can rock lingerie and be downright sexy.

Victoria's Secret has been under heavy scrutiny for their model representation since 2015, when Lane Bryant launched their #ImNoAngel campaign as a way to illuminate Victoria's Secret's lack of body diversity. But drastic changes haven't taken place since that campaign launched. Because of that, Majors decided to take the problem into her own hands and prove that "sexy" is a term that knows no size limitations.

To do that, she took circulating Victoria's Secret ads, and recreated them with her as the star.

"Maybe I’ll be a Victoria’s Secret Angel this year for Halloween, since it ain’t happening in real life lol," she began the caption, showing a side-by-side shot of her and a campaign photo, where both of them are wearing the same panty set, and sitting in the same position. "Just paying homage to a few of my favorite pics/outfits from VS here and showing that curvy girls can rock (and sell) lingerie just as well as straight size models."

This project has a very pointed motive to push for more representation in the fashion industry. In an interview with The Huffington Post Canada, Tabria shared, "I really want to open the discussion of inclusivity in mainstream media."

After all, if women don't keep pushing, the neddle doesn't move.

While many lingerie brands stay steadfast in their opinion that only a smaller waist size can push their products, Majors shows that's not true. All body types like to feel sexy, and all body types will look for lacy panties at one point or another. So wouldn't it make sense that they would purchase from a place where they see themselves represented?

If you see a model your shape rocking a sheer thong and red lacy bra, you'll automatically see yourself in the image and think, "Cool, yup, I can rock that. Now where's my credit card?"

Women have been pushing companies to change their practices and include more body diversity, so the ones that are steadfastly ignoring their consumer-base seem to be valuing a male gaze over their actual consumers. The straight-sizes and beauty standards that Victoria's Secret gets constantly called out for fits in with the male gaze aesthetic of thigh gaps and small waists, but that's not what women want to see anymore.

So you have to ask, who are these brands exactly selling to? Majors acknowledges this in her Huffington Post interview, saying, "I just want to know why they, and so many other companies, don't cater to the average-sized woman."

If this is a store that caters only to women, it would only make sense that they would try their hardest to cater to all women. And as Majors shows, there's no real reason why plus-size women aren't included in the conversation. They look damn good in lingerie, and they'll sell it just as well as any straight-size model. Period