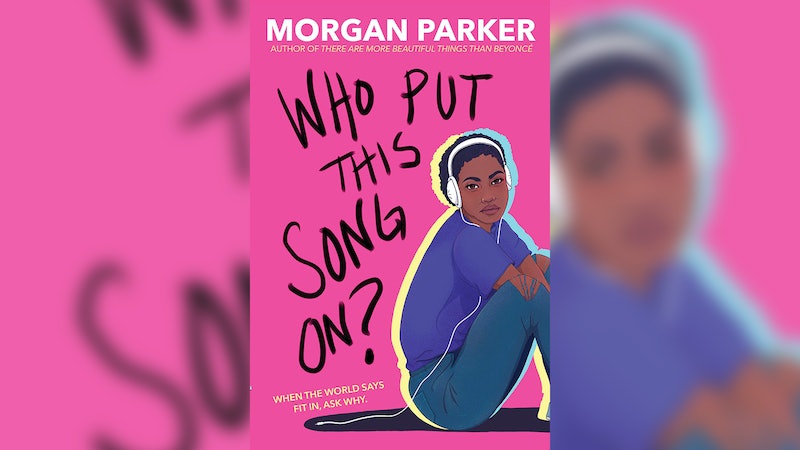 Celebrated poet Morgan Parker's debut novel is coming out this fall, and you can start reading it today on Bustle! The semi-autobiographical Who Put This Song On? centers on a 17-year-old girl, also named Morgan, who winds up in therapy after she begins to feel disconnected from her majority-white, suburban life. At turns funny and frank, Morgan Parker's Who Put This Song On? is a must-read in contemporary YA. The book comes to stores on Sep. 24, and is available for pre-order today. Keep reading to find out more about Parker and enjoy a sneak peek at her new novel.

Who Put This Song On? is the first novel for poet Parker, whose second collection, There Are More Beautiful Things Than Beyoncé, was named one of Oprah Magazine's Best Books of 2017. Parker followed up with a third poetry collection, Magical Negro, earlier this year. That's not all for Morgan Parker, however, as she also has a "debut book of nonfiction... forthcoming from One World/ Random House," according to her author website.

Oprah isn't the only big-name fan in Parker's audience. The author is a Cave Canem graduate fellow, and she received a 2017 National Endowment for the Arts Literature Fellowship. Parker also won a 2016 Pushcart Prize.

Morgan Parker's Who Put This Song On? is out on Sep. 24., but you can read a chapter from the book right now, exclusively on Bustle.

I have no clue why a therapist’s office would decorate for Halloween. Aren’t we all freaked out enough about our own problems?

Here I am again, the short black girl in the Dinosaur Jr. T-shirt and plaid blazer, in the waiting room of Susan’s office and the waiting room for the rest of my life, agonizing over whether or not I should partake in a bowl of candy corn. The soundtrack is the Pixies song from the end of Fight Club, “Where Is My Mind?” because of course it is.

Even if I wanted to, and I don’t, I could not describe Susan Brady LCSW’s harvest-themed outfit. Let’s just say there are cornucopias involved. I’m not certain my eyes don’t bug out when she opens the door.

Today, her office smells like a bad batch of pumpkin spice muffins. She offers the tissues and I decline. It’s our usual little silent film short. “So, I’m off the Wellbutrin,” I sort of blurt, hoping to rush through the session businesslike.

“Oh. How do you feel about that decision?”

Susan puts on her peppy radio voice. “It’s often tricky to find the right medication and treatment. It can be quite a transition. I’m here so we can work through the process together. But once you find the right dose, along with therapy, you’ll be able to maintain. You won’t have so many dips, and they’ll be more manageable.”

(She goes on, says something about mountains and plateaus. Behind my eyes, I envision them as a landscape — red, orange, burning.)

“I know it doesn’t feel like it now, but you’re being very brave. Depression is tough. You know, Winston Churchill battled clinical depression? He called it the black dog, like a little black dog following him around.”

“Hm. That’s pretty much it. Except my dog is like barking in my face all the time. Or the dog is eating me.” I want to say, I guess mine is a Black Black Dog! but I swallow the joke for myself.

'Who Put This Song On?' by Morgan Parker

Her reliably weird and empty pasted smile. “So, tell me about the Wellbutrin.”

“It was working, actually. I had a lot more energy, I felt like I could do things, I didn’t feel so bad about myself all the time. But it made my temper go crazy. I felt like the Hulk, like I wasn’t in control of my anger.”

“Are you still feeling that level of aggression?”

I breathe and nod slowly, concluding my report. Clumsily grab at a couple of candy corn in my fingers.

“And, do you still have thoughts about dying?”

“No!” I swallow; the sugar is like pebbles in my mouth. “I mean, not like that. I don’t think I want to hurt myself.”

“That’s not what I asked. Do you still think about dying?”

“I’m not thinking about killing myself. Seriously, I’m not. So. You don’t have to worry.” I notice I’ve been wringing my hands in my lap.

“But, there is something you’re not telling me, isn’t there?”

(There’s a difference between wanting to die and not wanting to be alive, but no one talks about that difference or what to do about it. Like, you can be a seventeen-year-old girl who is physically, cosmically, and innately certain that greatness and potential and the fucking sun exist in the world just for you, hanging there like a ripe avocado for you, specifically, to pick. But at the same time, you can be “clinically depressed,” a “sinner,” stuck in a skin and a landscape that feels like it’s on fire. And you don’t know any way out of the fire, so you just let it win, and try to remember how warm it is, and how when it covers you, you are at least, finally, not alone. Even if you’re not sure you believe in God, you hope it’s real. So you pray to nothing, you do everything right, just in case. Or, you say F*ck it.)

(I wish I could do one or the other.)

I sigh — it’s more of a growl, really. I do not want to be doing this, and the somersaults in my stomach move all the way up to my neck.

“Okay fine,” I say, unfolding my arms and flopping them like pool noodles at my sides. “It’s not that I want to die, really, but sometimes, sometimes, I think it might be better if I didn’t exist. If I just disappeared and all my family and everyone got memory-erased like in Men in Black. If I never existed, their lives would be better. I guess it just sucks that I’m here and now we all have to deal with that. It sucks for everyone.”

“You see yourself as a burden to others.”

I nod, trying not to acknowledge tears assembling behind my eyes. “And to me, too. I’m a burden to me.”

“How do you feel about that?”

“I mean... bad! Guilty. I know it would be messed up to kill myself, and my family and friends would be sad, but it feels like the only alternative is being a pain in the ass. I almost think being erased from the whole world, not ever existing, would be a gift.”

The way her eyes soften I can tell she’s thinking Cry, cry, just do it, soften and cry!

But I am vigilant to find my words. I want to explain myself.

“You know that movie It’s a Wonderful Life, the Christmas movie?”

“I love that movie. I cry every time. And I can’t tell if I’m crying because I love George, and I love how he’s so special to everyone in town, or because deep down, I know I’m not George Bailey. I’m not this epic person who changes everyone’s life. If Clarence the angel came and showed me what the world would look like if I was never born, I know that my family and everyone would be happier. I hate to say it but it’s just the truth.”

“And how do you know that?”

“I just do!” I snap, and cross my arms tightly, closing up again. “I mean, it’s fine, that’s just reality.”

Susan employs her favorite strategy: silence. She loves doing it because she knows it makes me so uncomfortable, just sitting there calmly while I squirm anxiously in my seat and dart my eyes around. She makes it so I have to sit with whatever I’ve just said — I’m not allowed to just zoom past it and make a joke.

Ugh, she’s good. I actually have to give her props.

“Oh, okay,” I say, standing up and exhaling for maybe the first time in an hour. I pull a folded check from my pocket. It’s swirling with my mother’s loopy handwriting, and looking at the number, I think, See? All this money they spend on me, all this stress — there’s no arguing with numbers.

Susan accepts it but looks back at me again with probing eyes. I move mine around nervously, waiting to be released.

Dashing for the lobby doors, I give Framed Portrait of Bon Jovi the stink eye. What does he know? Who wants to live on just a prayer, especially if you’re only halfway there — or in my case, if you don’t know where there is.

Sometimes, after therapy, I feel even more lost than before. I also feel ridiculous. What was the point of that? I think, seeing other cars buzz around the lot of the office park, other lives just going on, regularly, unobtrusively. Other people relaxing without the aid of several doctors and medications.

Why do I have to make everything so difficult?

Who Put This Song On? by Morgan Parker is available for pre-order now.