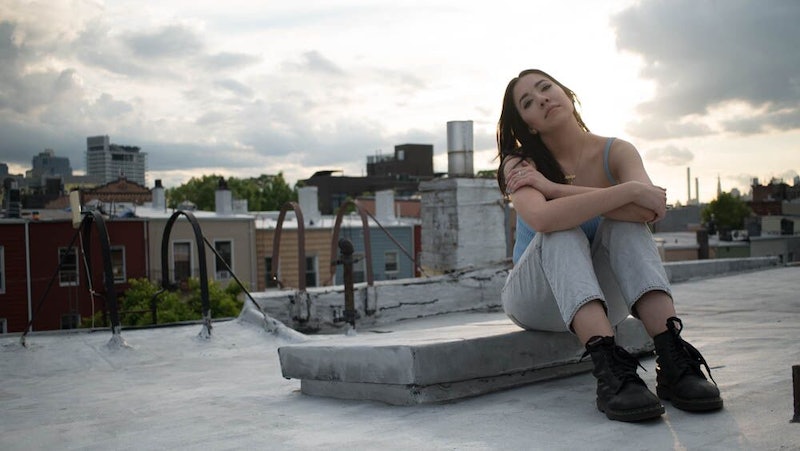 There’s a passage in Mary Karr’s book, The Art Of Memoir, where she talks about running away from her natural abilities as a poet. She’d spend hours and pages writing about things and people who were nothing like her, as a subconscious means of escaping who she was. She could ignore her sister when she was writing about a woman who was an only child. She could distract herself from the pain of watching her father die, if she name-dropped a philosopher, or something else "upscale" and intelligent, that distanced the truth and grit.

When I read this passage, I felt less alone than I ever did reading standalone poetry. I had always felt connected to Karr from the moment I heard her read at Syracuse University, where she is a professor and I was a student. Here was another woman, like me, who escaped life in Texas with parents you couldn't count on. I hung close to her words, hoping I would be like her one day: shamelessly writing about my past and finally owning it. Slowly, I realized that through poetry, I could tap into my Mexican heritage that I'd long been ignoring in my work and in my life.

From the moment I read Karr admit that she was running from honesty in her work, I knew I was, too. Though I'd been writing poetry since I was 15, I always felt like there was some secret to it that I couldn't crack. There was some sort of mental block that I had never been able to break through, and though my poems often felt accomplished, they had long felt a little empty, and I didn't know why. I had a sense I was staying away from my truth as a writer, but I was so far gone that I couldn’t put my finger on what that even was. When Karr finally wrote purely about her father without the distractions of trailing off about someone or something else, her husband simply said, “I was wondering when you’d get around to writing this,” as she notes in The Art. In the same way, it took me over 10 years to figure out my own truth I was suppressing.

As a biracial woman — half-Mexican, half-white — I learned a lot from my Mexican mother about what was beautiful and what wasn't, and my white father rarely chimed in.

The first poems I wrote in high school were all about my then-boyfriend. I wrote a lot about love, and even now, I still do. But it’s safe to write about love, isn’t it? I was not different or "other" if I wrote about a broken heart. It’s the universal pain that melts the divisions of skin color, social class, or how much money you have in the bank (I wrote a poem about this, too). For me, that was the safe space I wanted to stay in. I didn’t want to explore any part of me that was different; I spent much of my young life working to seem the same. Since I’m white-passing with a white-sounding last name, I often had the privilege to choose how I was perceived by others.

As a biracial woman — half-Mexican, half-white — I learned a lot from my Mexican mother about what was beautiful and what wasn't, and my white father rarely chimed in. For a long time there were subtle comments in my home that led me to believe that my Mexican side was not a valuable part of who I was. Features that were noticeably not Caucasian, like my dark hair and eyes, were not celebrated, and high school crushes who didn’t fit my mom's standard of blond-haired, blue-eyed perfection were often ignored when I tried to talk about them. A blond boy would appear on TV, and my mother would say things like, “Isn’t he so cute?” Sometimes when brushing my hair or remarking on my long eyelashes, she’d tell me, “I was hoping you or your sister would turn out with green eyes, like your dad.” I couldn’t help but feel the need to only own my white heritage, and I simply let my Mexican ethnicity fall to the wayside.

Through poetry, I’ve always been able to say things I couldn’t say out loud. I write often about my father’s death and look to poets like Karr and Sharon Olds for inspiration on how to do so strikingly. Slowly but surely, that became another safe zone for me in writing. My father died, but that wasn’t necessarily something wrong with me; it was something that happened to me. It was not part of my identity. Being able to tap into my personal identity would take much longer. I didn’t always see Mexican poets pop up in my favorite books or my favorite poetry websites, but one day I came across José Olivarez on Twitter, and saw his poem, “I Walk Into Every Room And Yell, Where The Mexicans At?” I was completely in awe. In it, he writes,

the white woman at the party who may or may not have voted for trump tells me she doesn’t meet too many mexicans in this part of new york city.

The entire poem is written as one cohesive thought and paragraph, with rarely any punctuation. It felt almost like one big, neurotic tic the author felt just from living his day to day life as a Mexican person in America. I realized almost immediately that I had those same feelings. My white side could not stop these thoughts as I found myself in a group of blonde women, remembering my mother’s thoughts on green eyes. I could not shake the sick feeling in my gut when I moved to New York City from Texas, when I realized most of my white friends only knew Mexican people as laborers and service workers.

This was the side of me I had been avoiding for so long. When working on my recently published chapbook, 23 Emotions, I had the insatiable urge to write about all of the Mexican thoughts and feelings I’ve had living inside me that I’ve never dared say out loud, including my confusion on why it shouldn't be celebrated. With the resurgence of white supremacy scares in America, stirred by Donald Trump’s rise to power, it was getting harder and harder to ignore this side of me that so many political leaders seemingly hated.

When I wrote my poem, “Liberosis,” I instantly knew I had something special. I begin, “he holds my head in his hands, and he doesn’t call me a mexican.” In it, through poetry, I explore my mother’s view on being Mexican and how she’s influenced my choices today, and I grapple with wondering if I am dating a white man simply because of her influence, or if my hesitancy to wear hoop earring comes from her calling them, "too Mexican."

But in the piece, I also cut her some slack. Brown mothers may not negatively describe their own heritage because they hate it or they hate themselves, but maybe because they know how much easier things will be for children who can pass as white. Maybe my mother knew I’d have a better chance at being successful if I had a white last name, instead of her Mexican name. After all, Latinx women in America are the lowest paid minority in the country. Latinx women make just 54 cents to every white man’s dollar, according to National Partnership. When you're told constantly by your country that you don't matter because of your skin color or your name, it becomes impossible to not believe it yourself. But sadly, it's also just the truth in America today: white people have access to more advantages to become successful.

I don't know if I would have ever explored this side of me had it not been for Trump's presidency, but I certainly know I wouldn't have been able to without poetry. Poetry is a world where you can be loud and roaring and no one can see or hear you. Your pain and art are contained to the page, and your only hope is to sort of send it out into the universe hoping some good can come from it.

"Liberosis" is forthcoming in No, Dear magazine, and the winner of the 2018 International Merit Award from the Atlanta Review. The poem is included in the chapbook, "23 Emotions."