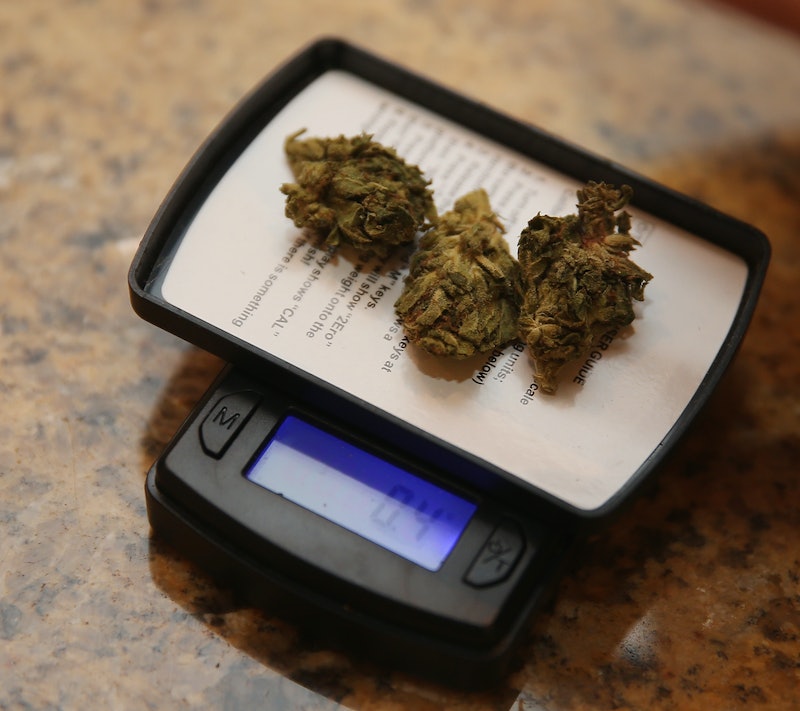 On New Year’s Eve, over 60 people were arrested for allegedly having less than one ounce of marijuana among them at a house party in Cartersville, GA, according to the Bartow Cartersville Drug Task Force. According to the police, they were responding to a 911 call that reported gunshots in the vicinity of the party’s location. In a press release, the Bartow Cartersville Drug Task Force states that “upon arrival, officers detected the odor of marijuana and observed subjects fleeing the premises. Responding officers observed marijuana in plain view and initially recovered a semi-automatic handgun.” The press release also states that “all the subjects at the residence were placed under arrest for the possession of the suspected marijuana which was within everyone’s reach or control.” One parent told the local news affiliate WSB-TV that the police arrested the entire group because no one took responsibility for the drugs. Bustle reached out the the Cartersville Police Department for comment and will update this story when we hear back.

The party was reportedly a lingerie-themed 21st birthday party. Deja Heard, who hosted the party and had rented an AirBnB for the occasion, told WSB-TV, “I’m very sorry it happened, all of us are innocent – it's just not right.” Another person at the party, who is pregnant, told WSB-TV she was mistreated by the arresting officers. "I was throwing up water," she said. "The whole saying 'innocent until proven guilty' went out the window. They told me I was an unfit person to have a baby." Other people at the party reported tied up with zip ties. The people arrested reportedly ranged in age of from 15 years old to 31 years old, according to WSB-TV.

Attendees told WSB-TV’s Tyisha Fernandes that they spent up to three days in jail and are worried they will have to live with a criminal record. Dakelin Wells, one of the attendees who was arrested, said, “I’m about to graduate college this semester, so it was kinda embarrassing. I had my cousin with me; he’s in the military, so it just sucked we had to go through it that way.” Some people also reported that they lost their jobs as a result of the arrest.

According to ThinkProgress, Black people in Athens, GA, a city near where the arrests took place, are 4.7 times more likely to be charged with a marijuana violation than white people. Nationwide, the disparity persists: a Black person is 3.73 times more likely to be arrested for a marijuana-related offense as compared to a white person in the U.S., according to the ACLU.

The Georgia state chapter of the NAACP (National Association for the Advancement of Colored People) and the Bartow chapter of the NAACP have launched an investigation on behalf of the group, which is being referred to as “the Cartersville 70.” There is currently a GoFundMe campaign to help with the groups’ legal expenses and bail fees. The page states, “[The Cartersville 70 needs] your help to bring justice and light to the unjust treatment these individuals experienced leading to and during their incarceration.” The campaign has currently raised a little over $1,000 out of a $15,000 goal.

As some people on social media pointed out, the arrest of these young, primarily Black people for less than an ounce of marijuana came just hours before recreational marijuana use in California became legal. Other Twitter users posted comparisons of the Cartersville incident with stories about white marijuana entrepreneurs, noting that while different states have different regulations about marijuana, systemic racism can still play a role in how marginalized people are affected by these laws.

More like this
An Honest Review Of The TikTok-Famous WalkingPad
By Kaitlyn Wylde
How To Protect Your Digital Privacy If You Need An Abortion Post Roe v. Wade
By Kaitlyn Wylde
How The City Healed Five Years On From The Manchester Arena Attack
By Ella Glover
Plan C Vs. Plan B: What's The Difference?
By Lexi Inks
Get Even More From Bustle — Sign Up For The Newsletter