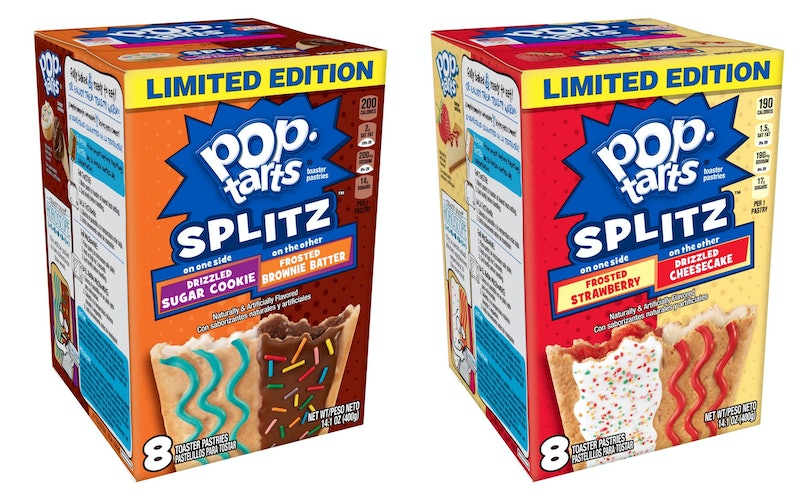 Exciting news for anyone who was devastated when a variety of Pop-Tarts famous for featuring not one, but two flavors was discontinued six years ago: Pop-Tarts Splitz are coming back to stores soon! The news first surfaced as a rumor at the beginning of April, but now it’s been confirmed by Kellogg’s: According to a press release dated April 25, the two-in-one treats will be hitting shelves in May of 2018. Said Angela Gusse, director of marketing for Pop-Tarts, "At Pop-Tarts, we love to give fans the varieties and flavors they love most, so we’re excited to introduce all-new tarts with two crazy good flavors side by side." Heck, and yes.

Snack food site Junk Banter gets the credit for bringing the new Pop-Tarts Splitz to the internet’s attention prior to Kellogg’s official announcement — although at the time, they were masquerading under the name Pop-Tarts Mash Ups. On April 6, two posts appeared on the Junk Banter Instagram page, each featuring what looked like box art for Pop-Tarts Mash Ups. "OK, Pop-Tarts… I see you," read the caption on the first post. "Looks like the Pop-Tarts Splitz from about a decade ago are making a comeback with new Pop-Tarts Mash Ups, which I’m hearing will be out later this spring." At the time, Kellogg’s neither confirmed nor denied the Mash-Ups rumor — but that didn’t stop people from getting excited anyway.

Pop-Tarts Splitz were originally introduced to the world in 2007. The idea was to "pair two different icings and fillings, side-by-side creating a two-in-one-of-a-kind toaster pastry, delivering a fun new way to enjoy this family-favorite snack," according to the press release that announced the arrival of the treat (and yes, if you thought the phrasing the release used sounded a little clunky, you are not alone). At launch, the two varieties available were a Chocolate-Vanilla combination and a Strawberry-Blueberry one; according to breakfast and snack food review site and database Mr. Breakfast, the Chocolate-Vanilla variety tasted kind of like "a tiny chocolate and vanilla cream pie," while with the Strawberry-Blueberry, it was “almost as if a new berry gets created in your toaster.” Other flavors were eventually added to the line, including Chocolate-Strawberry.

They also had an incredible advertising campaign featuring a whole bunch of super weird animated shorts like this little gem:

Like all good things, however, one day, it all had to come to an end: Splitz were discontinued in 2012. And some fans have been mourning their loss ever since.

Now, though, they’re about to make a triumphant return to our lives. What’s more, the flavor options appear to be a bit more adventurous than they were a decade ago. Junk Banter’s Instagram posts gave us a sneak peek of what to expect, which did turn out to be somewhat accurate: The site’s posts revealed that a Sugar Cookie/Brownie Batter combination and a Strawberry/Cheesecake one were likely to be included in the lineup, with Kelloggs' announcement confirming that the flavors on offer are officially known as Drizzled Sugar Cookie/Frosted Brownie Batter and Frosted Strawberry/Drizzled Cheesecake.

We’ve seen some of these flavors before; Strawberry was among the original four varieties available when Pop-Tarts were first released back in the 1960s, while Sugar Cookie has popped up from time to time as a limited-edition flavor. Brownie Batter and Cheesecake, however? Those are brand new. It's true that the short-lived Pop-Tarts Pastry Swirls did have some cheese Danish-esque options, but never before have we seen Brownie Batter- or Cheesecake-flavored Pop-Tarts in the lineup.

(I am probably the only person on the planet that like Pop-Tarts Pastry Swirls. I am fine with this knowledge. To each their own, right? Right.)

Pop-Tarts Splitz are, however, a limited edition offering, so grab them while you can. Happy munching!