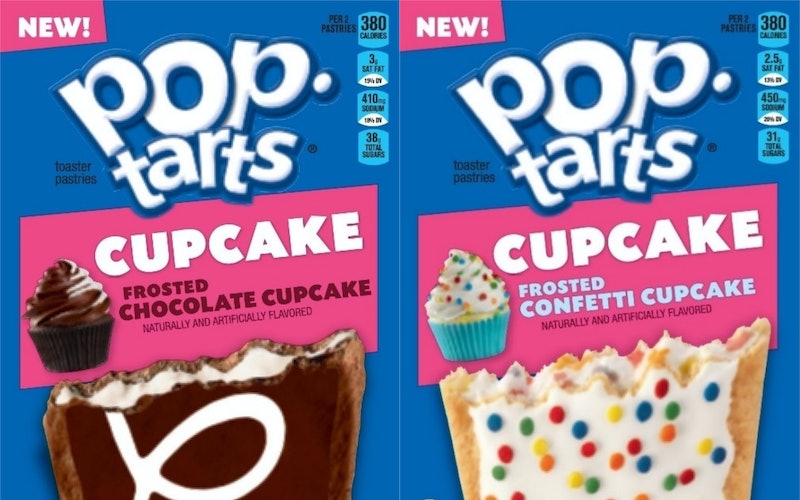 We've all indulged in breakfast for dinner, but what if dessert for breakfast became the new classic? Thanks to Pop-Tarts, this can now be the world that we live in. Pop-Tarts has two new cupcake flavors and all you need to do in order to enjoy them any time of the day — including before 9 a.m. — is unwrap the foil.

Stand in bakery lines no longer. Spend an hour mixing together and baking cupcakes at home from a box no more. Pop-Tarts combines your favorite cupcake flavors into the beloved flat breakfast treat so that you can skip lines and avoid baking, but not have to compromise on that baked good goodness. All that's required of you is to stand at the toaster.

Prepare your pantries for Pop-Tart's new Frosted Chocolate Cupcake flavor, and the return of the Frosted Confetti Cupcake flavor. You're going to want to make room for a massive stock up on both these flavors. The new Frosted Chocolate Cupcake Pop Tart is the perfect breakfast or snack for chocolate lovers. It's pretty much a chocolate cupcake flattened into a toaster pastry. Which is not only convenient, but also delicious and genius. Who says you can't start the day with dessert?

Pop-Tart's Frosted Confetti Cupcake flavor is welcomed back after a nearly two-year hiatus off of shelves. Per a press release from Pop-Tarts, the flavor is the second-most requested flavor to return to the Pop-Tart line up. I consulted Twitter and in its heyday, the Frosted Confetti Cupcake flavor was all the rage. One Twitter user wrote, "Mother of all that is sweet my taste buds are in heaven. Confetti cupcake pop tart is a dream." The tweet is, of course, capped with the heart-eye emoji.

Some Twitter users ate the Frosted Confetti Cupcake for breakfast, others for dinner, and others felt it would be the best option for president. The conclusion being, this flavor has been missed and will most likely be received with open arms — and shopping carts — once it makes its way back to shelves. Both the Frosted Confetti Cupcake and the new Frosted Chocolate Cupcake can be expected in major retail stores as soon as June 2019, where they'll retail at $2.09 per package. They can have all of my monies.

No matter the time of day, it's always appropriate to have a Pop -art. The cupcake flavors were actually created so you could eat them whenever you wanted. Even for breakfast. “We reimagined the classic dessert in Pop-Tart form, giving our devoted fans more opportunity to enjoy this delicious, sweet treat any time of the day,” said Joe Beauprez, director of marketing for Pop-Tarts, in a press release.

And any way to eat them is the appropriate way to eat them. Whether that's toasted, frozen, or straight out of the foil, there is no wrong way to Pop Tart. With the new Pop-Tarts Cupcake flavors you can have dessert for breakfast — or any time of day.