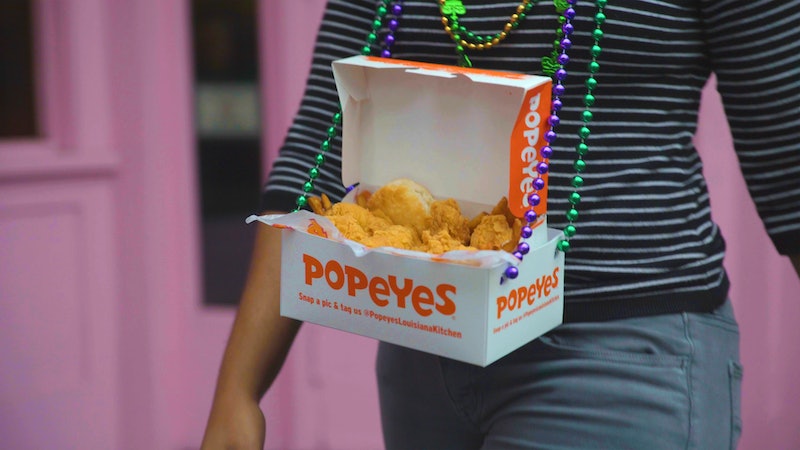 There is a solution to every problem. Even the tough ones like not having three hands to do everything you need to do in a day. If you're hoping to carry a box of fried chicken around but need your two hands for holding a drink and twirling around the quarters of New Orleans, now you can. Without a third arm! Popeye's Louisiana Kitchen launched wearable chicken beads, for Mardi Gras because now we can truly have it all.

The purple, green and gold beads collected at Mardi Gras are now serving yet another seriously helpful purpose. While these beads aren't edible, the same can't be said for the fried chicken they hold up. That's right — per a press release from Popeye's provided to Bustle, you could be wearing chicken as a necklace on Fat Tuesday, which this year falls on March 5. These decorative and multi purpose wearable chicken beads, known as Popeye's Mardi Gras Beadbox, is ~exclusive~ to this one day, and will be available in New Orleans outside of the Canal Street Popeyes restaurant.

A Popeye's snack box dangles from your neck so you can use your arms for catching more beads, and taking quick snack breaks in between. Any Popeyes meal that fits into a snack box is able to be converted into a Popeye's Mardi Gras Beadbox. And honestly, this is the accessory of the century.

Mardi Gras is a carnival with celebrations held all over the world, but most notably in New Orleans, Louisiana where parades fill the streets. According to MardiGrasNewOrleans.com, parades begin in January but the official day of Mardi Gras in 2019 is Match. 5, known as Fat Tuesday. The website writes, "Mardi Gras, or 'Fat Tuesday,' is the last day of the Carnival season as it always falls the day before Ash Wednesday, the first day of Lent." And in addition to the parades, one of the greatest draws of people to New Orleans is the food.

From King Cake to gumbo, there are more than dozen reasons to pack your favorite cloth napkin and head to Louisiana. But for those of us who can't get to New Orleans to join in on the fun at the table, there's Popeye's Louisiana Kitchen to keep our taste buds in the loop. Though those of us who won't find ourselves in New Orleans on Fat Tuesday to wear chicken as a necklace, there are other deals to enjoy. Even if they remain on the plate and not around our necks.

For a limited time only, two diners can eat at Popeye's Louisiana Kitchen for $10. And Southern Butterfly Shrimp, fried and served over a glorious bed of french fries with a biscuit is $5, for a limited time. No matter where you are on the map, you can always find a local coupon to take with you to Popeye's. Just because you aren't at Popeye's in New Orleans for Mardi Gras doesn't mean you can't enjoy Popeye's perks.

If you are in New Orleans, this is the perfect opportunity to literally wear your love for Popeye's chicken. Now you can have your chicken and both arms to do whatever you want with, too.