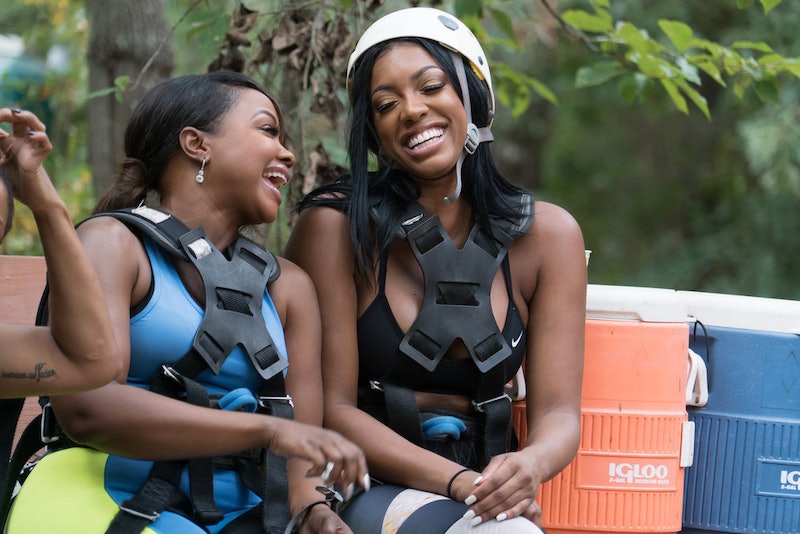 So, when did Porsha become the secret star of The Real Housewives of Atlanta? In a season when most of the cast seems checked out or rehashing the same old storylines, Porsha has managed to work in a new boyfriend, rumors about Kandi and Todd being swingers, a health crises about her brain not getting any blood flow, and the threat of pregnancy. And, even better, Porsha's anger management actually seems to be working, even when Kenya is screaming at her that it isn't. Ironically, leaving the situation instead of punching Kenya in the face proves Porsha has made some progress.

Perhaps, however, she was just preoccupied by her relationship. Todd claims that Porsha's social media caused him to lose his job, between her scantily clad photos and her support of the DNC (he calls his work environment too "conservative" for both of those things). However, when her tries to be romantic and say that he chose her over his boss, she flips out and says that Todd is wasting her time if he's not going to be committed and give up his job.

I can't tell if she's simply not willing to be the breadwinner in the family, if Todd is on the payroll, or what, but this guy is not acting like the father of two teenagers... his constant eyerolling makes him seem like the teenager. And the social media shouldn't be an issue, because the two haven't posted together in... a while.

Maybe it's relationship angst that makes Porsha unwise enough to attend a dinner with Kenya, who quickly turns the occasion into her chance to provoke Porsha into another physical altercation, this time, in the woods. And yes, let's be real: Kenya loves provoking Porsha. That does not mean that any domestic violence is being discounted or ignored; Porsha should not go around dragging people by their ponytail. Phaedra tries to smooth everything over, but everything is not good between Frick and Frack.

Turns out, Porsha has not watched any RHOA reruns, because she didn't realize that in the post-boat fight dinner, Phaedra lied and said the dinner was designed to talk about anger management. After setting verbal fire to the plates of cold food from hours earlier, Shereé and Phaedra are left grasping at their edges, shocked that Porsha was able to deliver such a stern tonguelashing. Dressed in all black, I think this makes Porsha the next RHOA antihero.