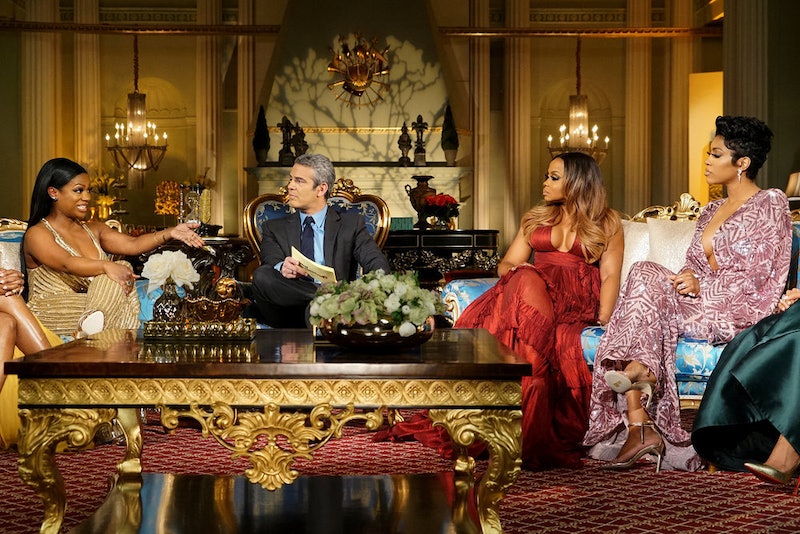 Annette Brown/Bravo
By Kayla Hawkins
May 8, 2017

Within the first few minutes of the final part of the Real Housewives of Atlanta reunion, all of those soundbites from the super-dramatic trailer were finally revealed in context, and it was almost painful to see the show take on such a serious, high-stakes topic. Earlier in the season, Porsha claimed that she heard Kandi was allegedly conspiring to drug and rape her from an unnamed source, but in the reunion, Porsha claims that source is Phaedra. While discussing Phaedra's rape accusations, it might be the first time that Kandi actually starts crying and gets really emotional on this show's reunion since shehad the explosive friend breakup with Kim Zolciak over "Tardy for the Party."

Phaedra claims that she "repeated it" to Porsha a few days before the two sat down, but Porsha claims that Phaedra told her multiple times that this was direct information that she received from Kandi. In response to this shocking development, Kandi repeatedly asks Phaedra why she would lie about this as a practicing lawyer. Making false accusations that someone is drugging victims with the intent to sexually assault them is an abhorrent thing to do, and yet, onstage Phaedra remains silent at first. Backstage, after Kandi brings filming to a halt, Phaedra apologizes, and only says "I don't know," when Porsha asks if she really believed this "rumor." And when the show comes back to the couch, Porsha claims Phaedra told her "three times," including "two days ago," that Kandi told her this directly. Phaedra manages to apologize, admitting that she "shouldn't have repeated it." Yeah, that seems pretty obvious.

And while the drug accusations are incredibly serious, turns out that Phaedra is also the source of the hilarious rumor that Todd went to New York City and pretended to be a man mnamed Marvin in order to hook up with random women (either with or without Kandi's approval, it wasn't clear). You know what, if only Phaedra's so-called "rumors" stopped there. That's the kind of goofy shade throwing that the RHOA are known for. But alleging that one of her former best friends may have broken the law? That's crossing the line. And while Phaedra finally was able to offer an apology, it's no wonder that everyone in the cast was silent when she said "I'm sorry I repeated it." It's not nearly enough to justify the choice to spread this ugly story.