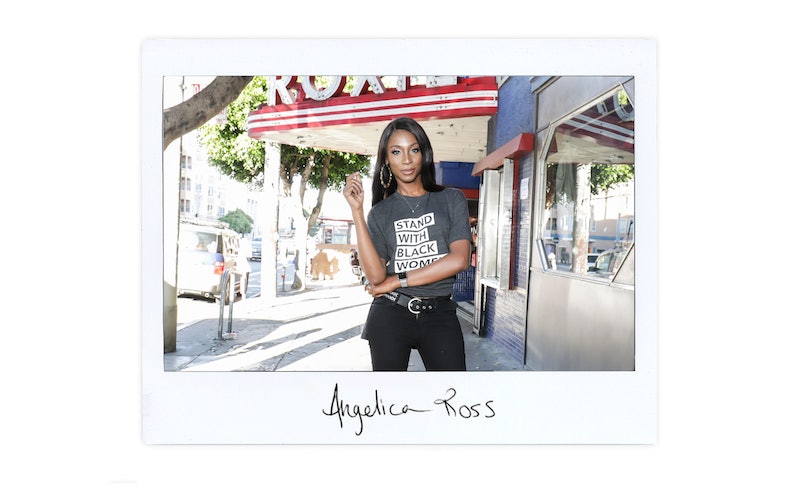 When celebrities hang out with Bustle editors, we want to give them the chance to leave their mark. Literally. So we hand them a pen, a piece of paper, a few questions, and ask them to get creative. This time, Pose star Angelica Ross is leaving her mark in the Bustle Booth as part of Bustle's 2019 Rule Breakers issue.

If there's one word to describe Angelica Ross in this current moment, it's busy. Given the popularity of Pose and her beloved character Candy in particular, it feels like Ross is doing interviews 24 hours a day about any and every subject, from her upcoming role in the new season of American Horror Story to transgender rights in the current political climate to her Buddhist breathing practices. She's also out garnering support for the Trans March happening in Washington D.C. on Sept. 28, and was invited by Oprah to be a celebrity panelist on Black Women OWN the Conversation, an upcoming series of interviews with Black women that will tackle topics such as mental health, motherhood, and more.

She's got a lot on her plate, sure. But to hear Ross tell it, she isn't some "overnight success that popped out of nowhere" and landed on a Ryan Murphy set. Yes, the fact that people are handing her the mic to talk about topics close to her heart has been an adjustment. But she's been acting for more than a decade, with more recent roles in shows such as Claws and Transparent, and also founded TransTech, an incubator for LGBTQ talent. Still, she's happy about the newfound attention. After all, dialogue, as she writes in her Bustle Booth below, is her superpower.

"I want people to know that I am a full woman, I am a sexual being, I am an intellectual, I am a mother to some, I am a boss, I am an authority, I am a leader, I am all of these things."

As a Buddhist, Ross explains that part of her practice is opening herself up and being "able to say what needs to be said, and to have dialogue with people that is not only challenging but also compassionate and respectful." As a Black trans woman, she hasn't always been met with the same compassion and respect she has for others, which is why she leads by example.

In the wake of the Trump administration's ban on transgender people in the military and its attempt to roll back various protections against trans discrimination, Ross says being able and willing to engage in dialogue with others — especially those who haven't taken a stand against the president and his targeted attacks on the trans community and people of color — is imperative. "Many people are still not ready or able to respond, or they don't know what to say," she says, which is why it's important to amplify and support the voices of those who are willing and able to do the work. Many of those voices, she notes, are Black women. And she's proud to be one of them out there.

"I want people to know that I am a full woman, I am a sexual being, I am an intellectual, I am a mother to some, I am a boss, I am an authority, I am a leader, I am all of these things." She's all of those, and more.

Check out Ross's Bustle Booth questionnaire to see what she has to say about what scares her, who inspires her, and the number one rule she wants to see broken.

Editor's Note: This article has been updated to accurately reflect the date of the Trans March in Washington D.C.