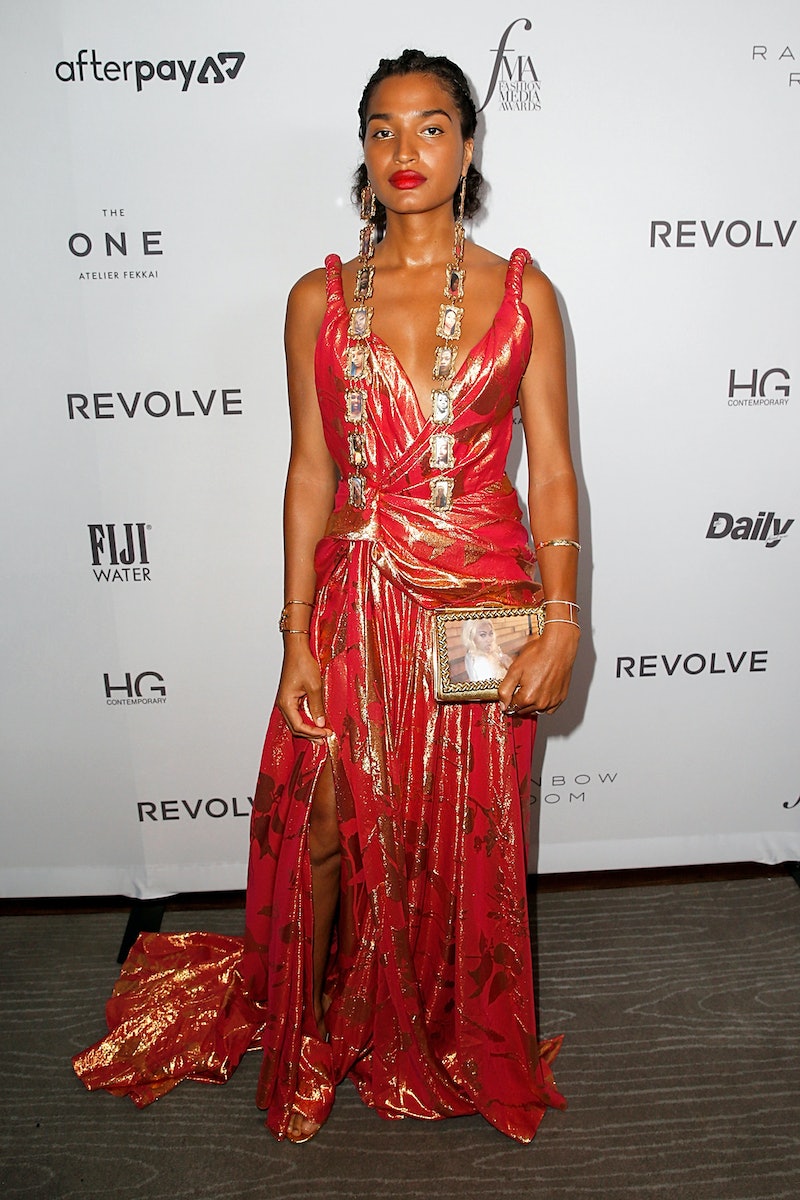 On Friday, Sept. 6, Pose actor and model Indya Moore brought awareness to violence against transgender women at the Daily Front Row Fashion Media Awards. The transgender and non-binary activist won the Cover of the Year award for their appearance on Elle's June 2019 issue, and they used their time in the spotlight to honor the 17 black transgender women who have been murdered in the United States this year. Not only did Moore spotlight the women with their words, they also did so with a poignant and bold fashion statement.

As reported by W Magazine, designer Areeayl Yoseefaw collaborated with Moore's stylist, Ian Cogneato, to create keepsake earrings with 16 frames — one for each of the transgender women who have been killed in 2019 — for the actor to wear. Before the ceremony, a 17th woman, 17-year-old Bailey Reeves, was killed on Sept. 2 in Baltimore, per Out. Moore carried a picture of her on their clutch, so that her memory could be honored as well.

The actor's tribute didn't end with their earrings and clutch. When Moore accepted their award, they gave a speech that brought attention to the violence transgender women face every day, while also calling for action to make the country safer for everyone. "I feel so honored to share this space with you people," their speech began. "It's a very expensive venue. It's populated by very expensive people. All of our lives are so expensive, including mine and people like me...As you all know — or not — I am black and I am trans. Some of you may be uncomfortable with the politics of my speech, and I won't apologize for that, because my life is politics."

Moore went on to thank the organization for their award. The actor is the first transgender person to appear on the cover of the American Elle magazine. But they noted that being the first wasn't nearly as important as ensuring that more publications commit to being inclusive and spotlighting people of all backgrounds. "For me there is little honor in being the first, but there is only honor in not being the last," they said, according to The Hollywood Reporter.

The Pose star continued their speech by highlighting the systemic violence transgender people face simply for existing. "Trans people deserve safety, acknowledgement, and respect," Moore said. "Not just when we're on the cover of magazines, but when we are in the streets, when we are poor, when we are sex workers. When our hair ain't laid. When we can't afford Louis Vuitton. Or when we can't get access to a hormone shot. And especially when we are dying."

After their speech, Moore shared a photo from the evening on Instagram along with a powerful caption. They wrote: "Thank you Aree, for sharing your keepsake earings so I could bring my sister's with me tonight. Just Like me these women dare to exhaust their freedom to exist by being visible, however, instead of being celebrated, they were punished for it. While we make up .6 percent of the American population, The life expectancy of trans women/femmes is 35 years old. Existence that requires bravery is not freedom. A life that requires bravery is not free."

By using their platform to send such a vital message, Moore brought attention to 17 women whose lives ended far too soon. The violence and discrimination that transgender people face every day shouldn't be ignored, and through their words and their fashion on the red carpet, Moore made sure that America heard their call for action.