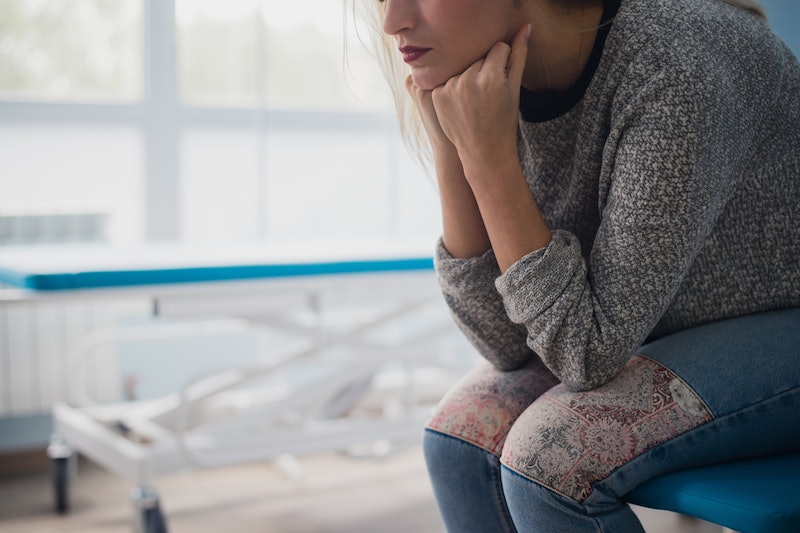 Depression is one of the top pregnancy complications, but a new report published by the U.S. Preventive Services Task Force says that depression during pregnancy might be preventable, USA Today reports. The report, which was published in the Journal of the American Medical Association (JAMA), found that mental health screenings and access to mental health counseling are effective ways to prevent depression during and after pregnancy, says USA Today. But it should be noted that the report focuses on how these measures affect women and does not address whether these preventive measures are effective for transgender, nonbinary, or gender nonconforming people who are pregnant or recently gave birth.

Based on their findings, the panel said in their report that they recommend interventional counseling for women with specific risk factors, including women with a personal or family history of depression or women currently experiencing depressive symptoms. The panel also recommends counseling interventions for women experiencing stressors like economic hardship or being single parents, the report says.

“We really need to find these women before they get depressed,” Karina Davidson, a task force member and senior vice president for research for Northwell Health, told The New York Times.

Depression during pregnancy is also known as perinatal depression, and it affects an estimated one in seven women, USA Today reports. Perinatal depression can often go unrecognized because the symptoms can look a lot like the day to day symptoms of pregnancy, like changes in sleep, energy levels, and appetite, according to Mayo Clinic. And the American Pregnancy Association says perinatal depression often gets missed by doctors because women’s symptoms can sometimes get written off as a result of their hormones being unbalanced because, well, they’re pregnant.

Your hormones do change a ton while you’re pregnant, but the American Pregnancy Association says chalking up all your symptoms to hormones is a dangerous assumption. That’s because, if left untreated, a person experiencing depression during pregnancy might not have the motivation or energy to continue to seek prenatal care or eat the kinds of foods they need to have a healthy pregnancy, according to Mayo Clinic. And because perinatal depression is more severe than the “Baby Blues,” it can also increase a woman’s chance of dying by suicide, The New York Times reports.

“This recommendation is really important,” Jennifer Felder, an assistant professor of psychiatry at University of California, San Francisco, who was not on the panel, told The New York Times. “This focuses on identifying women who are at risk for depression and proactively preventing its onset, using concrete guidelines.”

The task force says they didn’t take into account how much counseling interventions would cost when making these recommendations. But according to the Kaiser Family Foundation, depression screening is covered at no cost as a preventive service for women under the Affordable Care Act.

If you're pregnant and are wondering if you should get screened for depression, talk to your doctor. These recommendations are all about preventing depression before it starts, so there's absolutely nothing wrong with talking to your doctor about how to stay healthy — whether that's your mind or your body.

This article was originally published on Feb. 18, 2019