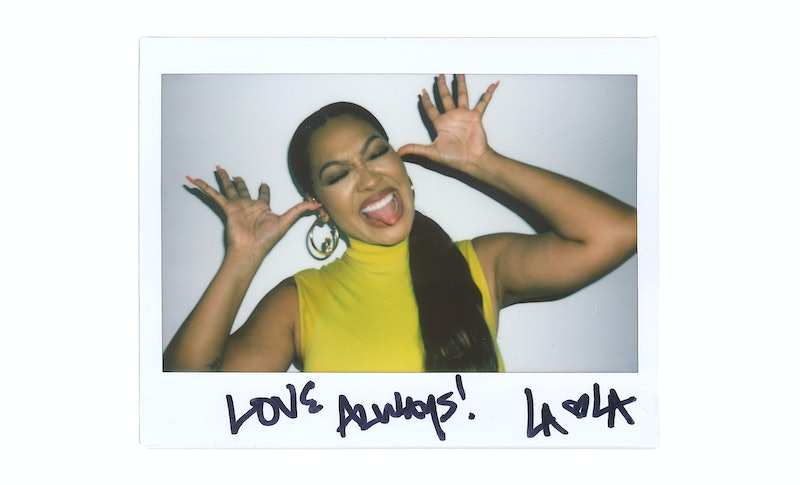 When celebrities hang out with Bustle editors, we want to give them the chance to leave their mark. Literally. So we hand them a pen, a piece of paper, a few questions, and ask them to get creative. This time, BH90210 and Power star La La Anthony is leaving her mark in the Bustle Booth.

You'd think that after over 20 years in show business, La La Anthony would be used to having her face plastered on billboards. But when she arrives at Bustle's New York City office in late July, she can hardly contain her excitement for her next stop: visiting the massive Power billboard in Times Square with her 12-year-old son.

She holds out her phone so everyone can get a sense of the scale of it, explaining that it's not her first billboard, but it is her biggest yet, and it's towering over one of the busiest streets in the world. "Major, major career moment, and I'm sharing it with my son," she'll later exclaim in an Instagram video, standing below a solemn black-and-white headshot of herself in character as Lakeisha on Starz's hit series Power. "Just a girl from Brooklyn, you know, with a billboard in Times Square!"

It's been a long time since Anthony was just a girl from Brooklyn, though. She got her first radio show when she was still in high school; by her early twenties, she was hosting MTV's TRL and Direct Effect. She's starred in classic rom coms like Think Like a Man and Two Can Play at That Game, started her own production company, launched a cosmetics line for women of color and a capsule clothing collection for Shopbop, written two books, and shared her marriage and family life on VH1 with La La's Full Court Wedding and La La's Full Court Life. (No, she would "absolutely not" do reality TV again. "That was a very small phase of my career.")

Anthony is certainly keeping busy, with starring roles in two shows airing right now — her beloved character Lakeisha is breaking bad in the final season of Power, and she plays Brian Austin Green's hip hop mogul wife in the Beverly Hills, 90210 reboot BH90210. Throughout her career, Anthony says her passion for music has been the biggest motivator. But also, let's be real: cash.

"I never wanted to be broke," she admits. "I hated being broke, and I was always broke, so I worked really hard to never be broke." And to keep her son happy and healthy, she adds. "That's what always brings things into focus for me," she says, anxiously checking her phone because she's keeping said son waiting to head uptown this very minute. Together they'll marvel in Times Square at the fruits of her labor. But if we've learned anything about La La Anthony, it's that this is far from the last time her face graces a billboard.

Learn more about La La by checking out her answers to our Bustle Booth questionnaire below.