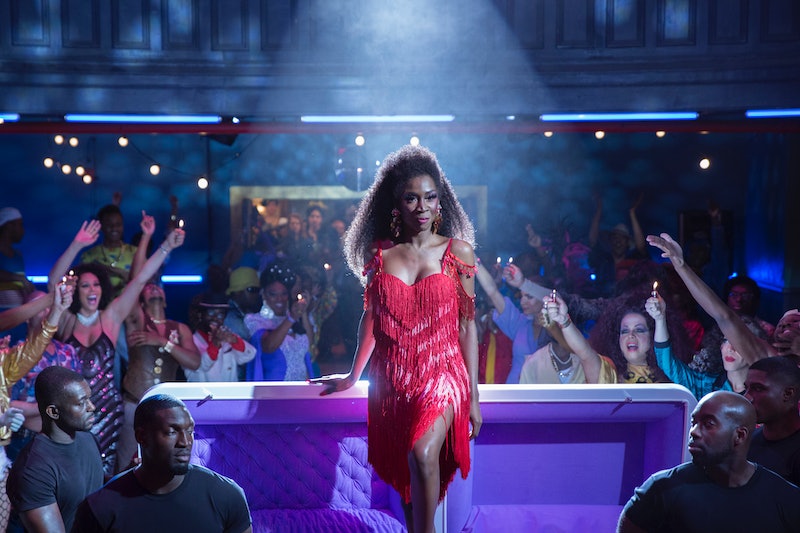 Spoilers for Pose Season 2, Episode 6. It’s been two episodes since Candy’s death, but she still plays a major part in the series. Episode 5 was titled “What Would Candy Do?” and showed Eletkra attempting to orchestrate a Nancy Kerrigan-esque attack on Damon with Candy’s infamous hammer. In Episode 6, Candy returned to Pose after Pray Tell collapsed on the ballroom stage just days before his big AIDS cabaret and vowed to haunt him forever. He was angry about AZT causing a negative reaction in his body, lashed out at Blanca (who is basically a saint on this show), and ended up being given a strong sedative after he panicked when his hospital roommate went into cardiac arrest.

Pray Tell woke up in his dreams to see dozens of flowers and cards from Candy, who reveals herself on the other side of the room. She tells him about her life hanging out with Alvin Ailey and Liberace in heaven before disclosing her own HIV status, which she says she kept quiet to prevent people from treating her differently. Things take an unexpected turn when Candy starts urging Pray Tell to overdose and die by suicide because things are better on the other side. However, Pray Tell decides that he is going to keep living as long as he can.

It’s no surprise that Pray Tell is thinking about Candy during his lowest moment. Their relationship was infamously contentious right up until the day she died, which left Pray feeling a lot of guilt and regret about how he treated her poorly because of his own insecurities.

Candy’s return to Pose caused mixed reactions from Twitter fans. Many were happy to see her back on their screens again with her fabulous dress and straightforward demeanor, but others were not happy about her representing suicidal ideation in Pray Tell's mind to push his story forward. It's a complicated choice because it would be understandable for Pray Tell to question if he should live and believe that Candy would want him to die. But, the pair seemed to have a resolution at Candy's funeral when he admitted why he treated her a certain way, so this interaction was a surprise.

Many Felt It Was Off Base

Others Were Just Happy To See Her

It's not likely that this will be the last time that fans see Candy's spirit on the show. Pray Tell's system does not tolerate the only HIV/AIDS medication that is available during the time that the show takes place, so his health will likely decline soon enough like the other patients shown in the hospital. Candy could continue to make random appearances to tempt Pray Tell into giving up and only time will reveal if he decides he can no longer fight against this diagnosis.

Candy's face is always a welcome sight, but her purpose for coming back to Pose is going to continue to divide the fandom. It would be nice to have seen her with all this backstory before her death — or at least not urging Pray Tell to give up.