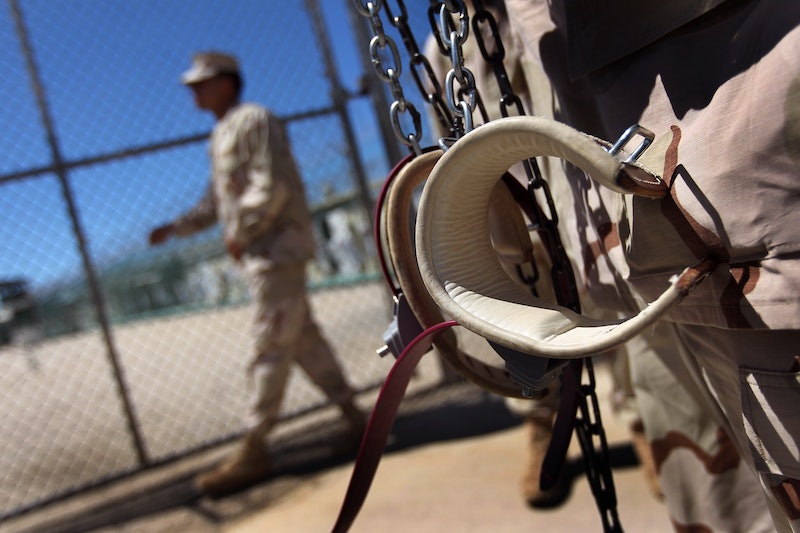 For Sen. Cory Booker, reforming the way the criminal justice system treats women in prison isn't about politics, it's about dignity. While female inmates face a number of challenges, one of the most shocking realities of prison life is the practice of shackling women during pregnancy, during recovery, and even during childbirth.

"It is absolutely abhorrent behavior that you're shackling pregnant women, or shackling women that are undergoing procedures," Booker tells Bustle. "What does that do their unborn child, that kind of stress, that kind of trauma?"

Booker is co-sponsoring the Dignity for Incarcerated Women Act with Sens. Elizabeth Warren, Kamala Harris, and Dick Durbin. The bill, introduced in July, looks to prohibit shackling at the federal level and ensures a higher quality of life for female inmates. The bill would allow free phone calls, emails, and Skype chats between inmates and their family members; require the Bureau of Prisons to consider where inmate's children live when placing a prisoner; and mandate that women receive free, quality pads and tampons while they're incarcerated.

While data on pregnant inmates is scarce, statistics from the early 2000s show around 3 percent of women enter federal prison pregnant; the statistics were similar for women entering state prison (4 percent) and county jails (5 percent). A more recent paper from the American Civil Liberties Union found that of the over 200,000 women held in U.S. prisons and jails each year, roughly 6 percent (or about 12,000) of them are pregnant during their incarceration. Shackling pregnant women is legal in half the country.

The ACLU points out that the American Congress of Obstetricians and Gynecologists, the American Medical Association, and the American Public Health Association have each gone on the record against prisons shackling pregnant inmates, and have encouraged restricting the practice or banning it outright.

"They are taking women who are having children, who are literally giving birth, and you are being shackled down while you're giving birth."

"They are taking women who are having children, who are literally giving birth, and you are being shackled down while you're giving birth," Booker says. "Like is there really a risk that you're going to get up from that table ... and try to escape or do something?"

The ACLU echoed that sentiment, noting that shackling "poses an unacceptable risk to women's health" — particularly during such a vulnerable time as pregnancy, labor, and postpartum.

The ACLU report added that moving around is "critical during labor, delivery, and postpartum" because, oftentimes, people giving birth need to be able to walk around, move their legs freely, or otherwise just be able to move in order to deal with the extreme pain of birthing a child or to shift into the best positions for delivery. The ACLU also reported that shackling (often using leg and abdomen restraints) can lead to bruising and can "prevent mothers from effectively healing and breast-feeding."

"It's often about not healing, but doing more harm, and putting people who are already survivors of trauma in situations where they can be victimized again."

As Booker notes, shackling pregnant inmates is just one symptom of the larger, overarching problems surrounding the treatment of incarcerated people. Ultimately, he wants people to understand how prisons fail to acknowledge the complex intersections of poverty, gender, race, and what that does to people — especially mothers — in the system.

"That's what's so offensive to me, is that we don't have a system that helps, it's not about restorative justice," Booker says. "It's often about not healing, but doing more harm, and putting people who are already survivors of trauma in situations where they can be victimized again."

Topeka Sam, a formerly incarcerated woman who founded a re-entry program for women leaving prison, endured shackling not during labor, but during surgery to treat uterine fibroids.

We think about going into surgery, going to the hospital, and how frightful or frightening that can be, but then to think about being shackled... When I talk to the sisters who tell me about them going through the experience of having their child while shackled in prison, it felt, I can feel what they felt like going through that experience.

Tiheba Bain was repeatedly shackled during a 10-year sentence she served in federal prison after pleading guilty to a violent crime. "The entire time that you're being transported, you're shackled, like hog tied, because you have the black box that connects to the handcuffs that connects to the leg irons ... and you're walking literally like a shuffle with your hands in front of you," she tells Bustle.

Booker recalls how he frequently encounters people who are shocked these conditions are still prevalent in the United States. Too often, he says, "the consciousness is not there."

"And this is why people ask, 'Well, why are you doing a women's prison bill?' Because I didn't know this."

"These are things that sort of surprise people, but they are particularly going on," Booker says. "And this is why people ask, 'Well, why are you doing a women's prison bill?' Because I didn't know this."

While it's still a difficult task to get Americans to agree on comprehensive criminal justice reform, getting the word out about the harmful practices being endured by women — and how to change them — is a powerful start.