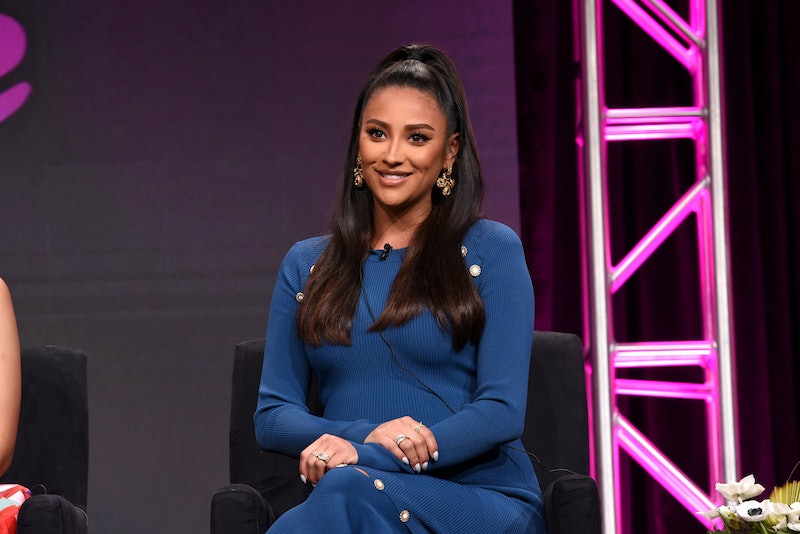 Shay Mitchell is having a child, but she didn't discuss it in the media for a long time. The Pretty Little Liars actor didn't publicly reveal that she was having a baby until nearly six months into her pregnancy, PEOPLE reports. And in a new interview with the parenthood lifestyle brand HATCH, Mitchell opened up about her experiences with extreme isolation and prepartum depression accompanying her pregnancy.

"The first five months of this pregnancy were super isolating," she said, "and I went through a severe depression." Because of a previous miscarriage, Mitchell said she "wanted to be sure that this second pregnancy would be viable before shouting it from the rooftops, so I hid it for nearly six months and became very anti-social."

A lot of her anti-social instincts during those first first months were due to other people's questions, she said. Instead of going out like she usually enjoys, Mitchell told HATCH, "I mainly stayed home to avoid stares and questions." Those questions largely involved expectations around her weight and perceived shame surrounding talking about her first experience with having a miscarriage. With such a small group of people to confide in about her pregnancy this time around, Mitchell said she was "was extremely lonely."

"I was gaining weight without having a noticeable bump," Mitchell said. Because of that, "I became paranoid that my team was giving me the side-eye (not knowing I was pregnant) and thinking I should hit the gym — which added to my loneliness." And even when people are pregnant, there are pervasive and damaging expectations about how their bodies should look. According to a 2019 study published in the Journal of Reproductive and Infant Psychology, people's expectations around weight changes surrounding pregnancy can do significant damage to pregnant people's body image, eating habits, and mental health.

There seem to be deep connections between body image, depression, and pregnancy, according to 2019 study published in the Journal of Affective Disorders. While only 11% of pregnant people who rated themselves as having satisfactory levels of body confidence experienced perinatal depression, 33% of pregnant people who were unsatisfied with their bodies also experienced depression. Perinatal depression is a depression that can set in for parents during pregnancy or just after the baby's birth, and therefore encompasses experiences of prenatal and prepartum (before birth) depression. When external body shaming and other people's expectations about a pregnant person's body accompanies their pregnancy, the risk of depression increases, the study found.

This might be especially true for people who have experienced trauma in relation to pregnancy and childbirth, according to another 2019 study published in the Journal of Reproductive and Infant Psychology. This study concluded that pretraumatic stress disorder, or the anticipation of a traumatic event like childbirth or the potential for another miscarriage, can negatively impact a pregnant person's mental health during pregnancy.

These mental health issues during pregnancy are not often discussed, and according to Mitchell, it was opening up about her experiences that helped her finally feel relief. She found it disorienting that "prepartum depression or feelings of isolation in pregnancy are not more vastly discussed," and the sense of being "alone in my depression compounded my state of mind."

When she was ready to share the news about her pregnancy, however, she said that "sharing my struggles also helped me heal." These struggles and feelings of depression during pregnancy are shared by nearly a quarter of people who get pregnant, according to the American Pregnancy Association. So if you're experiencing a similar kind of isolation to what Mitchell did during your pregnancy, it's important to remember that you're far from alone. There are resources to help with prepartum depression that include talking with your doctor as soon as possible about the possibility of struggling during pregnancy, especially if you have a history of depression. Together, you and your doctor can determine if feeling "off" during your pregnancy means you need to seek further treatment. And talking about it can help get you the support you need and deserve.