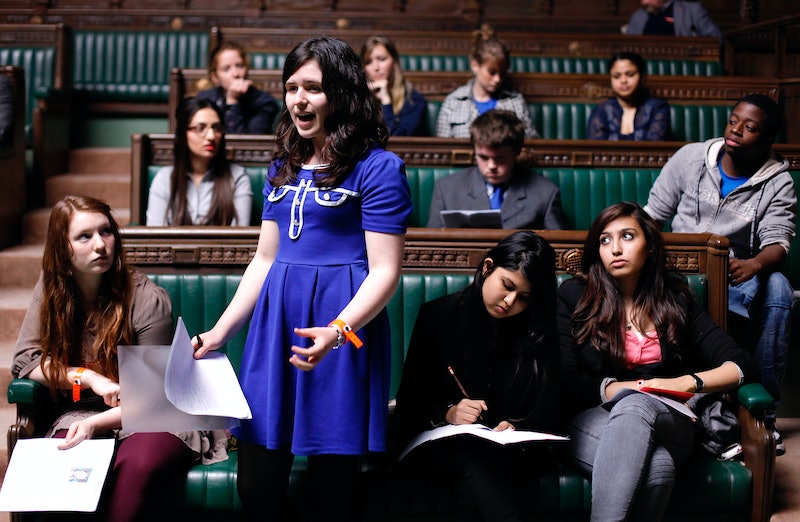 If the idea of giving a presentation at school or work leaves you feeling queasy, freaked out, or generally a mess, take heart — new research shows that having an audience can actually help you perform better. And while the especially introverted among you might be like, “Get outta here, there’s *no way* talking in front of people is a good thing,” researchers say that presenting in front of an audience can serve as a bit of incentive to boost your performance level.

A new study led by John Hopkins neuroscientist Vikram Chib found that being watched helps people do better. The Hub reports that when people are aware that they’re being observed, brain areas associated with reward and social awareness activate other parts of the brain affecting motor control, helping folks perform better at skilled tasks. The findings, published today in the Social Cognitive and Affective Neuroscience journal, might help people do better at work and school.

Chib, who previously studied what happens when people balk under pressure, initially launched this project to examine how performance suffers under social observation — but he quickly realized that, under certain circumstances, having an audience can spark people to function better than they would in isolation. “You might think having people watch you isn’t going to help, but it might actually make you perform better,” Chib told The Hub.

Previous studies show that when people are observed, areas of the brain associated with thinking about others’ thoughts and intentions get activated. Researchers wanted to further test to what degree people in front of an audience might work harder in pursuit of a reward or recognition — and what happens to the brain in this type of social situation. So Chib and his colleagues devised an experiment held at the California Institute of Technology. The 20 participants completed a task, and were paid a small amount of money based on their performance — the task was a video game similar to an Xbox Kinect or Wii. Participants worked on their tasks both alone, and with an audience of two present. Researchers found that when when participants knew an audience was observing them, areas of the brain associated with reward and social cognition were activated, triggering brain activity associated with action and motor skills.

According to the study, the authors “hypothesize[d] that individuals will be more motivated to perform a task successfully in front of an audience compared to a scenario in which no audience is present. In essence, the audience serves to increase the incentive motivation for successful performance. To test this hypothesis, we measured behavior and collected functional magnetic resonance imaging (fMRI) data while participants performed an extensively trained, incentivized, skilled motor task during conditions in which their performance was observed by an audience and conditions in which they were not observed.”

What this essentially means is that the presence of an audience, at least a small-ish one, ups the incentive for people to perform better. What researchers have yet to discover, though, is how a larger audience impacts social performance. According to Neuroscience Today, Chib noted that “Here, people with social anxiety tend to perform better, but at some point, the size of the audience could increase the size of one’s anxiety [...] We still need to figure that out.”