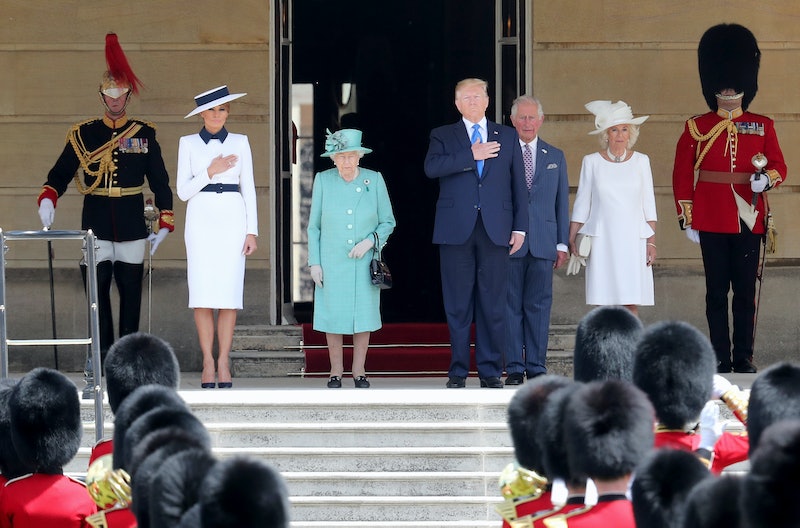 President Donald Trump and his family landed in London on Monday for the start of a three-day trip across the pond. While this isn't the president's first sojourn to the United Kingdom, it is his first official state visit to the country. As a result, the schedule for President Trump's U.K. visit is jam packed.

President Trump is back in the United Kingdom less than a year after he and First Lady Melania Trump sat down for tea with the queen in July. This year, however, Trump has expanded his entourage. Joining him on his official state visit to the United Kingdom are eldest daughter Ivanka Trump and her husband, Jared Kushner, both of whom also serve as senior advisers to the president.

The president's visit is expected to inspire large protests in London, according to The New York Times. The city's mayor, Sadiq Khan, a vocal Trump critic, has reportedly authorized organizers to fly a giant balloon float that depicts Trump as an orange baby. Hours before landing in the United Kingdom, Trump attacked Khan on Twitter, calling him "a stone cold loser" and alleging he'd done a "terrible job as mayor."

"In any event, I look forward to being a great friend to the United Kingdom, and am looking very much forward to my visit," Trump tweeted.

Here's how his visit is expected to play out:

Trump kicked off his visit with a ceremonial welcome at Buckingham Palace, during which he met the queen and Charles, the Prince of Wales, and his wife, Camilla, the Duchess of Cornwall. Royal gun salutes were fired off in a sign of respect as the U.S. president arrived at Buckingham Palace with the first lady, per ABC News.

Trump's ceremonial welcome was followed by a private lunch with the queen, Prince Charles, Camilla, and Prince Harry, the Duke of Sussex. The queen then took the first couple on a tour of the palace's royal gift collection, CNN reported. As is customary during state visits, the queen presented gifts to both Trump and Melania, according to the cable news network.

Trump and Melania then traveled with Andrew, the Duke of York, to Westminster Abbey, where the president laid a wreath at the Grave of the Unknown Warrior before touring the abbey, according to CNN. The president is expected to wrap up his first day in the United Kingdom with a state dinner at Buckingham Palace. According to Express, Prince William, the Duke of Cambridge, and his wife, Catherine, the Duchess of Cambridge, are expected to be among the dinner's esteemed guests.

The president is expected to sit down to a business breakfast with a number of prominent British business leaders at St. James's Palace, Express has reported. The breakfast is being hosted by May, who announced plans to resign as Britain's prime minister last month.

Trump and May are then scheduled to head to 10 Downing Street for a meeting and joint press conference before the president heads to a dinner he and the first lady are hosting at Winfield House, the U.S. ambassador's residence. Charles and Camilla are expected to attend Tuesday's dinner on behalf of the queen, per the BBC.

The final day of Trump's state visit is expected to kick off with Trump and Melania joining the queen and Charles in Portsmouth for an event commemorating the 75th anniversary of D-Day landings, the BBC has reported. The event is expected to feature music, testimonies, and a military display. It will be in Portsmouth that the queen formally bids the president and first lady adieu.

The president is then expected to travel to his private golf resort in Doonbeg, Ireland and meet with Irish Prime Minister Leo Varadkar at Shannon Airport before heading to France and, finally, back home to the United States, ABC News has reported.