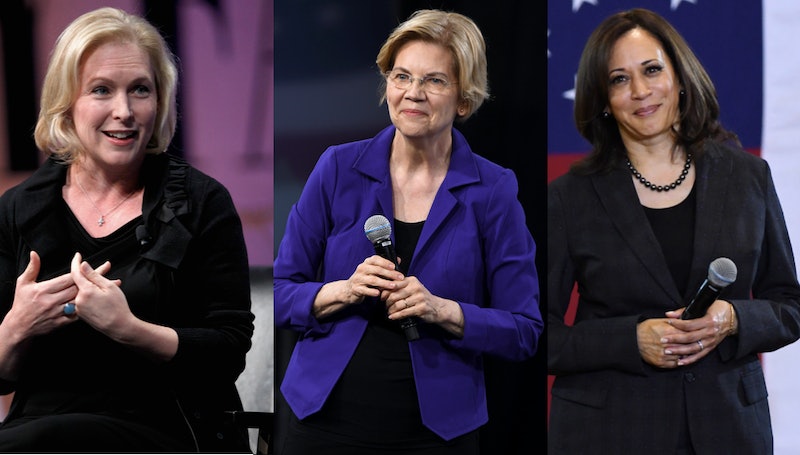 With the first Democratic primary debates just weeks away, abortion rights are taking center stage. And as state legislatures continue to pass restrictive bans, women presidential candidates roll out plans to protect abortion rights at a clip their male opponents aren't matching. While men running for the Democratic nomination have expressed support for abortion rights, they've largely been much more subdued on the subject — and political observers tell Bustle that's part of a longstanding trend.

Debbie Walsh, the director of the Center for American Women and Politics (CAWP) at Rutgers, says that it's expected for women politicians to advocate for reproductive rights and abortion access. "I think these things fall to women in some ways, whether they want them or not," she tells Bustle.

The number of women in the primary who've rolled out abortion policy proposals compared to their male counterparts is stark. Of the 17 men running, only three have unveiled plans to secure reproductive rights as president. In recent weeks, Sens. Elizabeth Warren, Kamala Harris, and Kirsten Gillibrand — three of the six women Democrats running for president — have all rolled out policy plans that would ensure abortion care remains accessible and affordable for those who need it.

Warren has proposed protecting abortion access under federal law, as well as making sure that care is covered under health insurance. Harris has used the now-gutted Voting Rights Act as something of a template to secure abortion rights, suggesting that states that have a history of attempting to restrict access must first obtain permission from the Justice Department before enacting any further regulations. And Gillibrand has vowed to codify Roe v. Wade, repeal the Hyde Amendment, and nominate only judges who will commit to protecting Roe if she's elected president.

According to Walsh, part of the reason it's so crucial for women to get into politics is because it drives their male colleagues to confront these kinds of issues head-on, too. Virtually all the men in the Democratic primary have expressed support for abortion rights, as well as criticized the recent wave of state bans.

Sen. Cory Booker has gone further by vowing to create a "White House Office of Reproductive Freedom," which would be tasked with protecting and expanding access to abortion care and other reproductive rights. Like his women colleagues, Booker has said that he'd like to see Roe codified into law as well. Sen. Bernie Sanders and former senator Mike Gravel — who has said that he isn't running to win — are the two other male candidates who've laid out reproductive policy proposals on their campaign websites, per Vox.

Even when women in office don't plan to champion abortion rights or other stereotypically gendered issues, like pay equality and education, Walsh says they often find once they're elected that few other politicians promote those issues — and so they feel compelled to pick up the mantle.

Heather Silber Mohamed, an assistant professor of political science at Clark University, agrees. She emphasizes that women's representation in elected offices is essential to making sure that abortion access and reproductive rights are legislative priorities.

"Women legislators in state and national government are more likely to sponsor and co-sponsor legislation related not only to abortion, but more generally to 'women's issues,' including reproductive rights and health care," Mohamed tells Bustle. "In states where there are more women office-holders, these issues are also more likely to be on the political agenda."

Mohamed adds that this may not be the case when it comes to Republican women who hold office, however.

Historian Mary Beth Norton tells Bustle that she thinks one of the reasons women presidential candidates have been more proactive in presenting proposals on abortion rights has to do with gendered life experiences. She says men are less likely to worry about reproductive health and abortion access; caveating that she doesn't usually chalk gender divisions up to biology, she believes that's the case here.

"The whole issue of reproductive rights and the ability to have an abortion if you need one is absolutely front and center for women in a way it is not for men," Norton says.

If male politicians took a more direct approach in advocating for reproductive rights, Norton thinks the result would be a net positive. In the meantime, the experts who spoke to Bustle underscore that, when it comes to advocating for abortion access, electing women to office will likely push the conversation forward.

"I think that they the work that [women politicians] do in these areas really illustrates what we've been finding over the years, which is that when women look at the world, they have different set of life experiences than their male colleagues," Walsh says. "It's frankly why we want all kinds of diversity in politics."