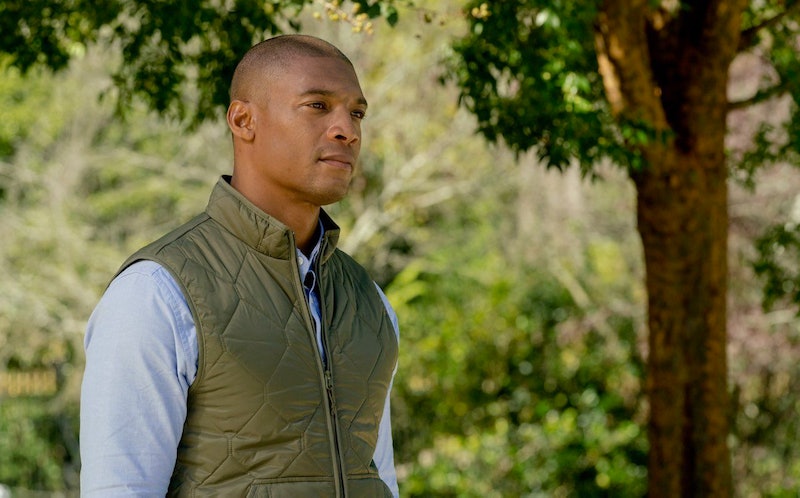 There are some stories that stand the test of time and resonate with generations after generations of fans. One of the best examples of this is Jane Austen’s 1813 novel Pride & Prejudice, which has spawned a long list of TV, film, print, and stage adaptations of the tale of hasty judgments, class, love, and marriage. Now, Lifetime is delivering a new take on this classic story with Pride & Prejudice: Atlanta, premiering June 1 with rising actor Juan Antonio, who portrays the infamous Mr. Darcy alongside Tiffany Hines as Elizabeth “Lizzie” Bennet. In an interview with Bustle prior to the film’s release, Antonio says Pride & Prejudice: Atlanta will diversify the type of Black stories that are told on television.

“I think in this day and age people are really open to things,” says Antonio. “Who would have thought about an all-African American cast for Pride & Prejudice? When we look back on this story’s history, we’ve never seen that. We’ve seen the 1800's versions and vampires and other takes on this story. But I think timing wise this is just perfect because not only does it open up the story but it’s an all African-American cast. It shows that you can put any race in this storyline and all the specifics are still there. It really brings us all together instead of saying it has to be this or that.”

Prior to landing the role as Mr. Darcy, Antonio had wanted to be in a period piece, but he found that many of those roles focused on a very narrow Black experience which primarily centered on suffering and slavery. This viewpoint has been seen in movies like The Birth of a Nation, 12 Years A Slave, and the 2016 remake of the miniseries Roots — all of which focus on very important, yet very similar narratives. Antonio acknowledges that those stories were valuable and needed to be told, but he also believes there is so much more to be explored about the Black experience. Some movies like Belle and Mudbound have examined Black life from new perspectives and Pride & Prejudice: Atlanta adds to this trend of period pieces that focuses on upper-class Black people in America.

“A lot of people don’t know, and this is something that I learned as well, is that there were a lot of influential, respected, rich Black Americans in Atlanta, and the South in general,” Antonio says. “We don’t see this narrated and exposed and this [film] gives light into that as well.”

Lifetime’s version will be the first time that any adaptation of Pride & Prejudice features Black characters and one of few takes with a present-day perspective. This means Pride & Prejudice: Atlanta will likely include relevant social commentary, media influences, and a refreshing take on marriage that doesn’t make it seem like the only route to lifelong happiness.

In this film, Mrs. Bennet (Jackée Harry) is determined to set her intelligent, passionate, drive, and outspoken daughter Lizzie up with the rich, sophisticated, single, and attractive Will Darcy. However, Lizzie isn't looking for love and has a very different view of marriage than her mother, which is highlighted in a Pride & Prejudice: Atlanta promotional clip. Lizzie also has a strong opinion about Mr. Darcy but, as fans already know, she will find out that her thoughts aren't completely true.

Pride & Prejudice: Atlanta certainly has all the tenets of its source material yet it’s still bringing a fresh new take that will make it stand out from its predecessors. And, Antonio had to balance the same line between bringing his own flair to the role while staying true to the essence of Mr. Darcy. The actor didn’t have much in common with the uber-rich businessman but he found ways to connect with Darcy’s human side.

"This guy grew up in a family with money…lots and lots of money," Antonio says with a laugh. "And, that’s not something that I come from. So, having to adapt that was something I had to open myself up to." The actor connected with Darcy's grounded nature, which he believes stems from the character coming from humble beginnings and experiencing wealth later on in life.

Antonio is honored to be in Pride & Prejudice, but he wants to continue to bring Black period stories to life via his production company Silver Fox. He says that if he could choose any under-explored story to tell, it would be the story of Wendell Scott — the first Black NASCAR driver to compete and win in the Grand National Series in 1963, per the International Motor Sports Hall of Fame. As a motorsports fan, Antonio believes this story will showcase triumph and inspire Black kids to explore the sports arena outside of the usual sports like basketball, football, and baseball.

Juan Antonio's behind-the-scenes aspirations haven't come to fruition yet but, for now, fans can check him out as Mr. Darcy in a diverse and modernized Pride & Prejudice story filled with love, laughs, and life lessons.