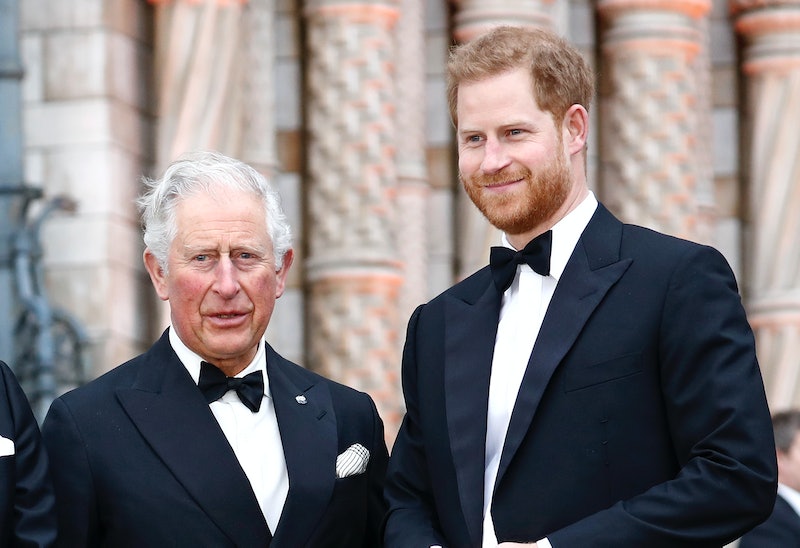 Royal baby Archie continues to make the rounds with his elder relatives. Prince Charles met his grandson Archie on Thursday, and it sounds like the occasion was filled with plenty of love. Entertainment Tonight reported Thursday that Charles visited Prince Harry and Meghan Markle at their Frogmore Cottage home in Windsor. The news comes after Prince William and Kate Middleton met Archie after visiting the new parents' house earlier this week.

As for why Charles didn't meet his youngest grandson before now, it's not because there are any hard feelings between him and Harry. People reported earlier this week that Charles was in Germany for three days after Archie was born. Before meeting his grandson, though, Charles and Camilla issued a statement about Archie's birth. "We couldn't be more delighted at the news, and we're looking forward to meeting the baby when we return," Charles said in the statement, which Clarence House tweeted out last Tuesday.

Baby Archie met his maternal grandmother, Meghan's mom Doria Ragland, last week. Ragland joined the Queen and Prince Philip in meeting the baby, a moment that's been documented on the official @SussexRoyal Instagram account. The sweet photo of Archie, his grandma, and his great-grandparents also served as the official announcement for the baby's name. The Instagram caption read,

"The Duke and Duchess of Sussex are pleased to announce they have named their first born child: Archie Harrison Mountbatten-Windsor

This afternoon Their Royal Highnesses introduced Her Majesty The Queen to her eighth great-grandchild at Windsor Castle. The Duke of Edinburgh and The Duchess' mother were also present for this special occasion."

Harry and Meghan confirmed Archie's birth on Monday, May 6, with an Instagram announcement. Two days later, the couple shared the baby's name.

"We are pleased to announce that Their Royal Highnesses The Duke and Duchess of Sussex welcomed their firstborn child in the early morning on May 6th, 2019. Their Royal Highnesses' son weighs 7lbs. 3oz," the original post read. "The Duchess and baby are both healthy and well, and the couple thank members of the public for their shared excitement and support during this very special time in their lives."

On May 8, Harry and Meghan also posted a set of Instagram photos of themselves with their new baby. It's clear from the new parents' expressions that they're already overcome with love for the tot, and that he's strengthening the love between them. The couple also noted in the Instagram caption that they're "incredibly grateful for the warm wishes and support they've received from everyone around the world."

Baby Archie is only a week and a half old, but he's already being showered with love by plenty of his family members. From Will and Kate to Charles and Camilla to the Queen herself, everyone seems thrilled about the newborn's arrival.

And now that the baby has officially met all of his immediate royal family members, Meghan and Harry might get some well-deserved time to themselves in Windsor. Royals, as much as anyone, deserve the chance to just relax at home with their new baby.