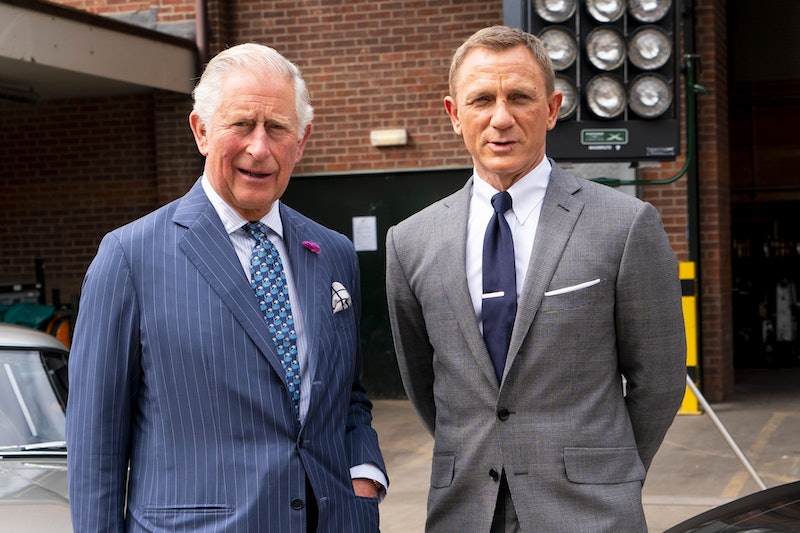 The 25th instalment of the iconic James Bond franchise is on the way, and speculation surrounding the upcoming release has gone into overdrive. Although Bond 25's official cast and premise have been revealed, there are still murmurs about what else moviegoers can expect — and many fans were likely surprised to learn that Prince Charles is rumoured to appear in James Bond. So, are we about to have our first ever royal 007 cameo?

According to The Sun, Prince Charles was allegedly invited to make a cameo appearance in the upcoming Bond flick following his visit to the film's set back in June. During his trip to Pinewood Studios, Charles was treated to a tour of the film's major set pieces, and was introduced to members of Bond 25's cast — including leading man Daniel Craig. Speaking about his visit to the James Bond set, a source told the newspaper, "When he visited the film set a few weeks ago it was discussed. Now he is considering it."

For more clarity on the rumours, I have reached out to Prince Charles' representatives as well as two of the studios involved in the making of Bond 25 for comment, and will update with any new information once it becomes available.

Speaking of the potential royal cameo, the source went on to allege that producers are "desperate" to sign the heir to the throne, and added, "It is no secret that the film has suffered a number of setbacks but landing a Royal could be just what the movie needs."

If the rumours turn out to be true, this wouldn't be the first time a royal family member had teamed up with the fictional British icon, because as reported by the BBC, Her Majesty the Queen famously appeared in a James Bond film sequence alongside Daniel Craig during the London 2012 Olympics opening ceremony. According to The Sun, one source claimed that Bond producers "loved the buzz" surrounding the Queen's Olympic stunt, and believe Charles might just be able to top it. Speaking to the newspaper, the source said, "They loved the buzz around the Queen’s appearance alongside Daniel Craig and think Charles could top even that. He is the epitome of everything British, perfect for a cameo role and Bond fans worldwide would absolutely love it."

As mentioned previously, much of the film's official cast has now been revealed, and according to the Radio Times, the cast of Bond 25 includes Daniel Craig as 007 himself, the Academy Award-winning Rami Malek as the film's main villain, Lashana Lynch as Nomi, Christoph Waltz as Ernst Stavro Blofeld, Ana de Armas as Bond's love interest Paloma, David Dencik as Waldo, Ralph Fiennes as Lieutenant Colonel Gareth Mallory, Ben Whishaw as Q, and many more.

According to the Mirror, fans can expect Bond 25 to arrive in cinemas on April 3, 2020. The highly-anticipated film was originally penciled in for a November 2019 release, however after some major on-set changes, production was delayed by four months. Despite the announcement of a new release date, fears that production would be delayed further emerged after the film's leading man, Daniel Craig, was injured during filming. Thankfully, the studio later confirmed that no delay will occur, so it sounds like we can finally begin to look forward to James Bond's 25th instalment early next year. Fingers crossed.