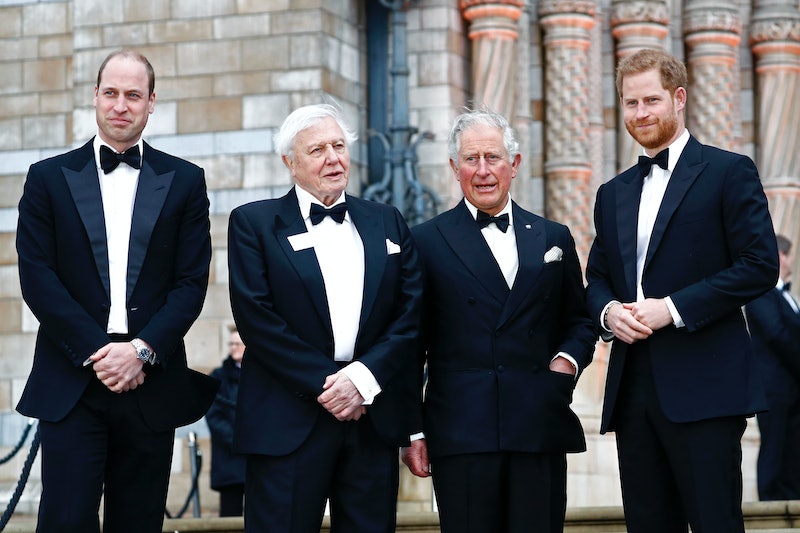 In what was a true royal family affair, Princes Charles, William, and Harry attended the Our Planet premiere on April 4 to celebrate a global cause. Joined by naturalist Sir David Attenborough, who narrates the eight-part Netflix environmental series (available to stream beginning April 5), the princes held court at London's Natural History Museum, per Kensington Palace and Clarence House's official Twitter accounts, alongside celebrity attendees that included both David Beckham and singer Ellie Goulding.

"🌍 A multi-generational effort is required to highlight the threat of climate change and ensure we maintain our natural environment," read a tweet from Kensington Palace, announcing The Prince of Wales, The Duke of Cambridge and The Duke of Sussex's attendance at the event.

Seeing the trio together, of course, was a somewhat rare treat for royal watchers. According to Town & Country, the last time Prince Charles appeared at a public engagement with only his two sons was back in April 2017 when they all attended a ceremony to mark the centenary of the WWI Battle of Vimy Ridge in northern France.

Coming together to support the Netflix series — which, per Kensington Palace, showcases "the planet's most precious species and fragile habitats, revealing amazing sights on Earth in ways they’ve never been seen before" — was only natural, given the three men's commitment to environmental issues. (Our Planet was created in partnership with World Wildlife Fund, according to Netflix.)

On Twitter, Clarence House touted Prince Charles as being an environmental leader for nearly 51 years, having made his first speech on "the irreversible effects of climate change" in December 1968. “For our own survival we desperately need the rest of the natural world with which we are intimately inter-connected but which we have been taught to exploit and dominate as something separate from ourselves,” Charles explained during a speech at the Our Planet event.

For his part, in 2012, Prince William founded United for Wildlife, which the organization's website states is dedicated to "saving endangered species like elephants, rhinos, tigers and pangolins, so they can share our world with future generations."

As seen in social media videos, William asked Attenborough onstage what advice he has for the new generation of global leaders to build on the work he has started to save the planet. Attenborough replied, in part:

Beckham, who stuck with the royals' father-son theme, bringing along his 20-year-old son, Brooklyn, noted in an Instagram post how inspired he was to hear Attenborough and Prince Charles "talk with such passion about the need to protect our natural world for all our children and our children’s children."

In addition to introducing Brooklyn to Prince Charles, the former soccer pro also took the time to chat with the younger royals as well. As he added in his post, "always great to catch up with Prince William & Prince Harry and to hear how they have inherited their father’s commitment to fight for wildlife and nature..."

Royalty in their own right, David, along with wife Victoria Beckham, as you may remember, attended both Harry's May 2018 royal wedding to Meghan Markle, the now-Duchess of Sussex, as well as William and Kate Middleton, Duchess of Cambridge's 2011 nuptials.

The royals' show of support to saving the planet truly seemed to be out of this world.