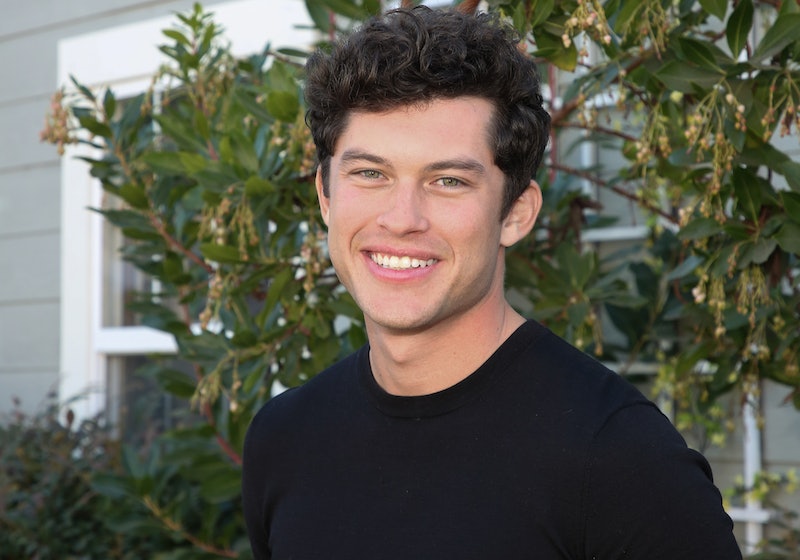 The Little Mermaid is really having a moment right now. Its 30th anniversary is on Nov. 13, there's a live-action movie in the works, and on Nov. 5, a live musical special of the classic Disney film will air on ABC. Ariel will be played by Moana's Auli'i Cravalho, and taking on the role of The Little Mermaid's Prince Eric is Graham Phillips. (Nope, not Harry Styles in this one, either. It ain't happening, guys.)

You may recognize Phillips' name because he dated Ariana Grande from 2008 to 2011 (and she was spotted hanging out with him again as recently as March). Or you may recognize the 26-year-old actor from some of his work. Phillips played Austin in Blockers, Nick St. Clair on Riverdale, and Zach Florrick (Julianna Margulies' character's son) on The Good Wife, among other roles. That said, Phillips got his start in theater, which means that performing in a live musical is pretty familiar territory for him.

"My first love was theatre," he said in an interview with Playbill. "So I've always felt more comfortable on stage than I have in front of the camera. Even though Little Mermaid is in front of a camera, it's live, so there's no room for pussyfooting around. You really have to commit."

Phillips starred as Evan in the Broadway play 13, and hopes to get back on stage soon. "For quite a while I've felt like something was missing, and I've realized that it's singing, so my sights are definitely set on getting back on Broadway," he told Playbill. "I've been missing it for a long time."

The Little Mermaid Live! will feature live performances of some of the movie's biggest songs, but these will be spliced together with the original animated film for the non-musical scenes. "Instead of competing with the nostalgia everyone has for the iconic film, we're just using it, Phillips told Entertainment Weekly. "I was relieved to hear that because it would be a difficult challenge to try to compete with it. If you can't beat 'em, join 'em."

If you have a good memory of the 1989 movie, you might be thinking, Wait, Prince Eric doesn't even sing. Not the case in this live telling. Some songs from the Broadway adaptation, in which Eric does sing, are going to be used, and Phillips is excited to show viewers more of the character's perspective.

"There's a whole song, 'Her Voice,' where you finally get to hear why he's obsessed with Ariel and what it feels like for him to not have love at first sight but to have love at first sound," he told EW. "That is a super unique phenomenon that you brush over in the movie. You get a sense of how much [Ariel's] essence is bound with his soul with that song."

In addition to becoming a Disney Prince and acting in other TV and film roles, Phillips is also trying his hand at directing and writing. His first feature, a modern Western called The Bygone in which he also stars, will be released on iTunes and Amazon Prime Nov. 12. Other than that, you can check out Phillips' everyday life on Instagram, where he can be seen on set, hanging out with family, and posing with a variety of drinks. Prince Eric loves a selfie, too.

More like this
At 28, Rosie Perez Risked Her Career To Stop Playing Stereotypes
By Gabrielle Bondi
Here’s Everything Coming To & Leaving Netflix In February
By Jake Viswanath
'Abbott Elementary' Fans Probably Missed This 'Parent Trap' Easter Egg
By Sam Ramsden
What Really Happened Between Lea Michele & Sadie Sink On 'The Tonight Show'
By El Hunt
Get Even More From Bustle — Sign Up For The Newsletter
From hair trends to relationship advice, our daily newsletter has everything you need to sound like a person who’s on TikTok, even if you aren’t.