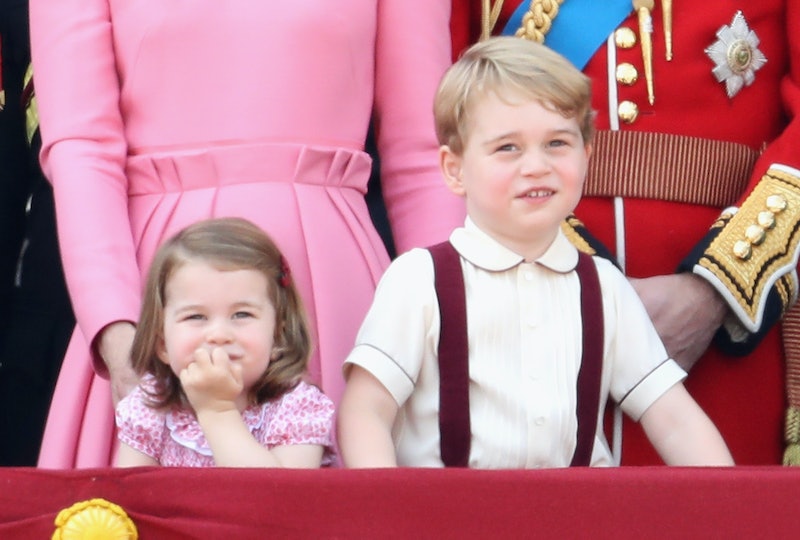 Prince George will be returning to school in a couple of weeks, but it seems like the rest of the royal family are determined to make these last days some of the best. Many of the royals are currently visiting Balmoral, the Queen’s Scottish holiday haunt, and they’ve been allegedly spotted around town enjoying the end of August. It turns out that the Queen’s great grandson in particular has been having the time of his life, as Prince George went grouse shooting with the rest of the family, according to reports.

Emily Andrews, royal correspondent to The Sun, reported that the entire Prince William and Kate Middleton clan had come up for the "weekend at Balmoral with [her majesty]." While I’m not the greatest fan of hunting myself, it turns out the royals are, as apparently many of them showed up for Prince George’s milestone.

She tweeted, "George was taken to his first grouse shoot on Friday by Kate, with the Queen, Charles, Edward, Sophie, Louise & James, Anne, Zara & Mike Tindall joining for lunch.Quite the family fun!"

If you’ve ever wondered what a post-grouse hunting royal luncheon is like (and you know I have), it was apparently a pretty spirited occasion. A source told The Sun, "It was a very jolly family lunch. The men and Princess Anne all shoot in the morning, then the wives and children join the party for the shoot lunch on the moor."

Hunting is something the rest of the royal family have been known to indulge in, as according to The Sun, Prince William shot his first kill when he was 12 years old in 1994. Prince George's mother, Kate Middleton, is also known to enjoy shooting, according to People.

On Sunday morning, the family were also photographed on their way into Crathie Kirk church, also per People. Many of the gang were apparently in attendance — Kate, Prince William, Queen Elizabeth, Princess Anne, Sir Timothy Laurence, Prince Edward, Sophie Wessex, and Lady Louis Windsor — however Prince Louis, Princess Charlotte, and Prince George didn’t seem to be in attendance.

We all have our happy place, and apparently Balmoral is the Queen’s, as she returns there every year for a summer holiday. Princess Eugenie told ITV’s Our Queen at Ninety per Express, "It's a lovely base for Granny and Grandpa, for us to come and see them up there; where you just have room to breathe and run. It's the most beautiful place on earth. I think Granny is the most happy there. I think she really, really loves the Highlands."

As for where Prince Philip is? He was photographed in Balmoral last week, a rare occasion given that he has been notably absent following his retirement and a hip replacement operation. The Evening Standard claims he has been "fishing and hunting" at Balmoral and also attended church with the rest of the family on Aug. 19 and, however there’s no word on whether he was at the session yesterday. Maybe he just had a really good lie-in — speaking from experience, there’s nothing better than a lazy Sunday morning.

Another pair of famous royals that seem to have withdrawn from the limelight a little are Meghan Markle and Prince Harry. The pair apparently joined the Queen and the rest of the clan at Balmoral for the bank holiday weekend according to Express, who also claimed that they "will enjoy long walks and barbecues," which sounds like a dreamy plan for the day off.

Can a girl get in on the occasion? I’ve been known to flip a couple of burgers in my time.