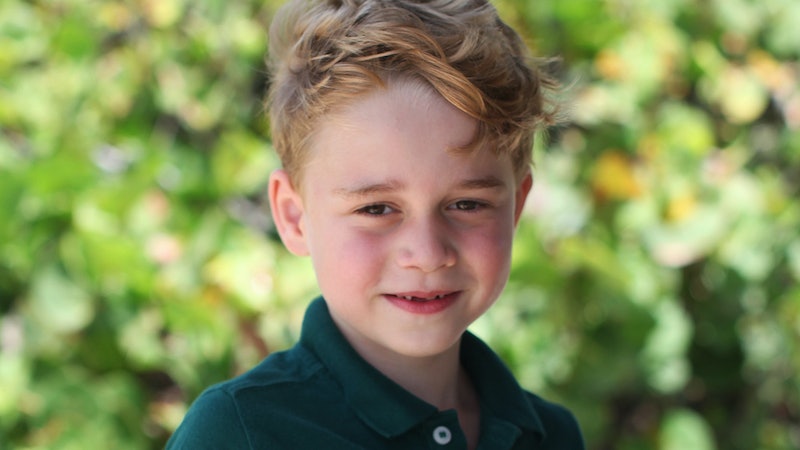 The Duchess of Cambridge/Shutterstock
By Sophie McEvoy
July 22, 2019

Prepare to feel old AF, because today (July 22) marks Prince George’s sixth birthday. While you wrap your heads around where on earth the time has gone, the royal family have continued the tradition of releasing a few snaps to celebrate the big day. As has been with previous birthdays, Kate Middleton took Prince George’s birthday pictures, and boy are they adorable.

The three photos were uploaded to the Duke and Duchess of Cambridge’s various social media accounts, including their Instagram @kensingtonroyal. In two of the photos, George can be seen repping England in a three lions tee with a contagious smile. They were “taken recently in the garden of their home at Kensington Palace,” as the caption reads.

The third sees George posing next to a picnic table, which “was taken on holiday with the family”. According to The Sun, the Cambridges are currently enjoying the Caribbean island of Mustique, which seems to be a favourite summer holiday destination for the family.

“It is incredibly private and incredibly discreet but not remote. They know and trust the staff who work there and they are creatures of habit,” a royal insider told The Sun. “Kate used to go there, the Middletons used to go there. The family love it.”

As the newspaper previously reported, the family also spent George’s fifth birthday on the island last year. During that holiday, they were “joined by Kate’s parents Carole and Michael Middleton, sister Pippa and her husband James Matthews.” What better place to spend your birthday with your family than on a tropical island?

While George may be far away from the rest of the royal family on his birthday, that hasn’t stopped them from congratulating the Prince on this milestone. While I’m sure he’s had many phone calls and texts, the Duke and Duchess of Sussex commented on one of the photos writing “Happy Birthday! Wishing you a very special day and lots of love!” coupled with a birthday cake and balloon emoji.

When the Cambridges return home from their holiday, The Sun’s Fabulous magazine reports that a typical birthday celebration for George will most likely “consist of a small family gathering at Anmer Hall — the Cambridges’ Norfolk estate, where George will be spending much of the summer holidays.”

He’ll also have his great-grandmother’s adoration to look forward to, as according to the magazine the Queen “goes out of her way to spend time with young George”. She also leaves “little presents” for him in his room every time he stays over.

It’s heartwarming to hear how close the royal family seem to be, especially with the new generation. And with the recent arrival of baby Archie, it appears that their bonds are forever closer — especially when it comes to Prince George and Princess Charlotte.

“They dote on him,” a source told Us Weekly (via InStyle). “Charlotte treats Meghan and Harry’s son like a little doll and is always asking for him.”

Hopefully, the royal family will release some pics of the cousins together soon — imagine how cute that would be!