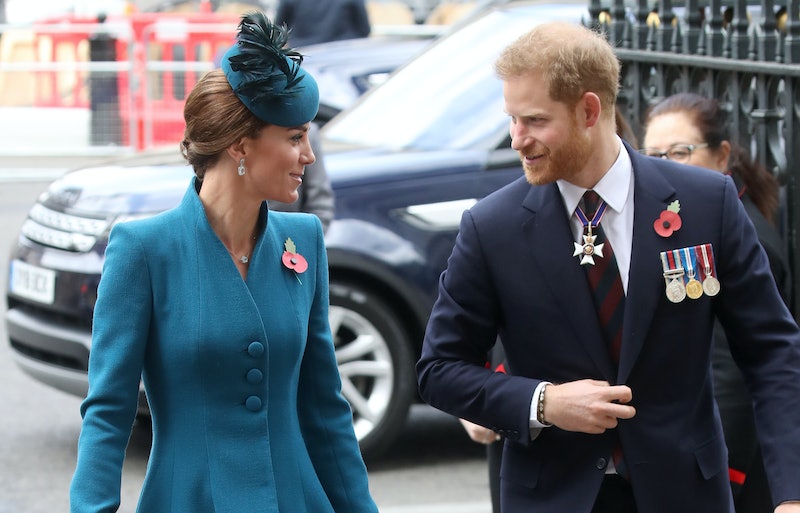 The countdown is on for the arrival of the next royal baby, but if you're predicting that Meghan Markle may have already given birth in secret, it seems like it hasn't happened just yet. As People reported, on Thursday morning, Prince Harry and Kate Middleton attended Anzac Day service at Westminster Abbey together, which honored fallen New Zealand and Australian Veterans. According to a source close to the royal family, Prince Harry wasn't expected to attend in case the baby had arrived, but in the end, he was able to make it.

"[Harry is] pleased he can attend today’s service, as planned,” the source told People. “With their baby due, his name was not printed in the program in case he was unable to do so.”

"The Duchess of Cambridge, with The Duke of Sussex and The Duke of Gloucester, attended the #AnzacDay Service of Commemoration and Thanksgiving at Westminster Abbey. Anzac Day has been commemorated in London since the first anniversary of the Anzac landings at Gallipoli in 1916, when King George V attended a service at Westminster Abbey and more than 2,000 Australian and New Zealand troops marched through the streets."

Prince Harry and Meghan Markle's Instagram account also shared a post in honor of Anzac Day, with photos of Harry and Middleton attending this year's commemorative service as well as photos looking back on the service that both of them attended last year as well as the memorial they attended in Sydney when they visited Australia last fall.

But where is Prince William? He's actually commemorating Anzac Day as well, just in a different way. Currently, William is on a two day tour of New Zealand on behalf of the Queen, where he met with survivors of the Christchurch mosque attacks. Kensington Palace shared a video of William visiting with 5-year-old Alen Alsati at Starship Children's Hospital in Auckland, where she's recovering after the attack. She asked him if he had a daughter, and William told her about Charlotte, who's "about the same age as you."

Meanwhile, Meghan Markle is likely preparing for the arrival of her baby. Because the couple is keeping things pretty under wraps, some fans have even speculated the royal baby already arrived in private. However, there are quite a few clues that's not accurate, including Harry's recent appearance. Earlier this week, reports surfaced that claimed that Markle's mother, Doria Ragland, had already arrived in London ahead of the baby's birth so she could be there to support her daughter. Although Markle and Harry have said that they plan to keep the birth of their child private until they are ready to share the news with a photoshoot taken with one photographer, one reporter, and one TV camera present, the palace will announce when Markle is in labor.

Based on what's been shared so far, Harry and Markle's baby hasn't arrived yet... but obviously, that could change at any moment, so let the royal baby watch continue. It's definitely an exciting time in their family, and hopefully, the palace will keep fans updated.