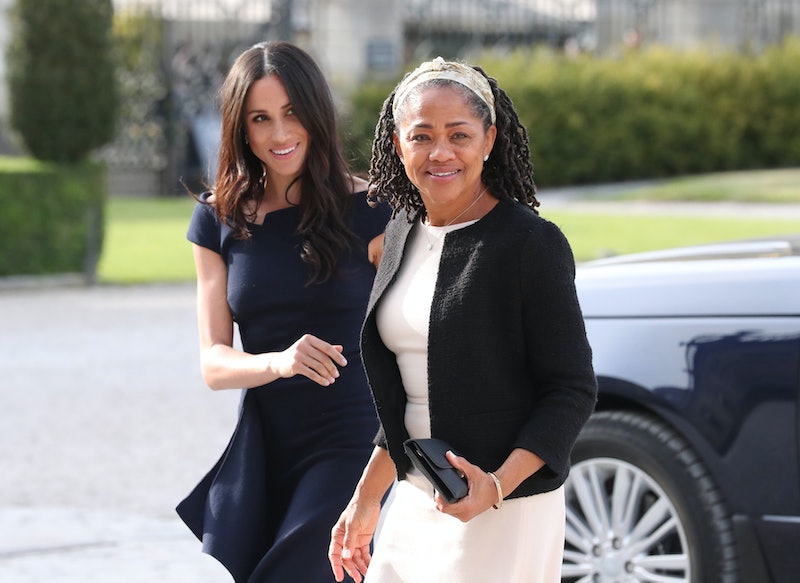 It's almost time to welcome another baby into the royal family, and it sounds like those last-minute preparations are being made — including the arrival of Meghan Markle and Prince Harry's loved ones into town as her due date gets closer and closer. According to what sources close to the situation have told Entertainment Tonight, Markle's mom, Doria Ragland, has reportedly arrived in London ahead of the baby's birth. Seems like a sign that this family will be getting bigger very soon.

Since Markle seems to have a close relationship with her mom, it makes sense that Ragland would come into town for the baby's birth. When Markle and Harry got married last May, fans were moved by how Ragland cried during the ceremony as she watched her daughter get married. And according to intel from Vanity Fair that was published earlier this year, Markle has even reportedly decided to forgo a nanny in favor of relying on Ragland instead, who will reportedly move into Frogmore Cottage with them to help out with the baby in those early months. So far, that report has yet to be confirmed, but either way, it seems like she'll be around for the baby's birth and earliest days.

And like many grandparents would be, it sounds like Ragland is really excited to meet the new addition to her family. In October, royal commentator Omid Scobie reported that a Kensington Palace spokesperson said that Ragland was "very happy about this lovely news and looking forward to welcoming her first grandchild.” And now, the time is almost here.

But don't expect Harry and Markle to follow the tradition that Kate Middleton and Prince William have set by posing for photos immediately after their babies arrived as they leave the hospital. Earlier this month, they announced that they're doing things their own way when Markle and Harry shared their birth plan in a statement released by Buckingham Palace via People. Although they do plan to announce when Markle is in labor, instead of making the news that their child has been born public as soon as it happens, they're choosing to keep things private, with Harry, Markle, and the baby later posing for photos with one photographer, one TV camera, and one reporter that they will release for the world to see.

It's hard to say when Markle and Harry's baby will make their arrival, but it definitely seems like it'll be soon — maybe even any day now. It's nice to know that when the time comes, Markle will have her mom by her side. All that's left to do is wait for Kensington Palace to make their official announcement and let those photoshoot pictures roll in.