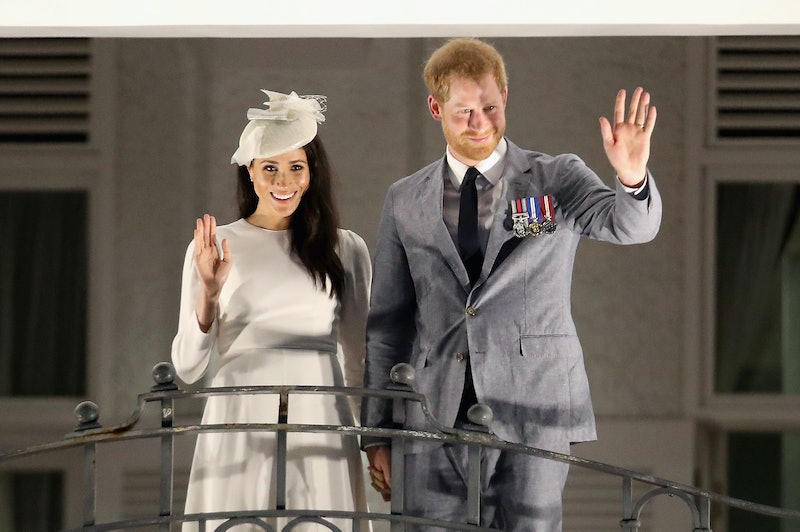 These two just stay making iconic moments, don't they? Whether they're interacting with the locals, soaking in the sights, or are simply snapped sneaking in a few romantic glances, the Duke and Duchess of Sussex's first official royal tour has been nothing short of historical. Speaking of which, Prince Harry and Meghan Markle's Fiji balcony photo was historical in its own right, as People reported — and not just because they've both perfected the royal wave.

The past-and-present iconic photos were both taken at Fiji's Grand Pacific Hotel, which has been visited by several royal family members throughout the years. Harry and Markle's balcony picture has been drumming up comparisons to one set of guests in particular, though: Harry's grandparents, aka Queen Elizabeth II and Prince Philip.

Back in 1953, the Queen and Philip stayed at that very same hotel during the monarch's world coronation tour, according to E! News. At the time, Her Majesty was 37 years old — which just happens to be exactly how old Markle is now. Coincidence? Yeah, probably. It's still an interesting similarity worth noting, though.

When the Queen and Philip first visited the Grand Pacific more than six decades ago, the monarch — wearing a voluminous white gown — waved to the crowd from the left side of the balcony, with a suited-up Philip waving beside her on the right.

OK, now look at the Oct. 23 picture of Harry and Markle below. Totally not a coincidence, right?

Markle is wearing a fascinator, not wearing a tiara, obviously, and her white dress is definitely a much more modernized take on what the Queen wore back in the day. Still, the way she and Harry are decked out for the Fiji photo op is clearly an intentional nod to their prestigious predecessors.

Of course, the royal couple did more than just pose for photos at the famous hotel. They sure do pose for a lot of photos, though, don't they? Not that anyone's complaining — well, except for maybe the Duke and Duchess themselves, but only like, somewhere super private and in very hushed tones.

While in Fiji — which nearly marked the half-way point of their royal tour —  the couple attended an evening gala where Harry addressed the crowd. "This visit is particularly nostalgic for us as a young married couple," the Duke remarked, as per People. "My grandparents stayed in this very hotel, the Grand Pacific, a number of times over the years."

"As you know, Fiji has a long tradition of welcoming royal visitors over the years and our two countries have enjoyed a close relationship and friendship. We share Commonwealth values and common goals – a love of rugby and a sense of humor! Our ties run deep."

Oh, Harry. Such a jokester. He then went on to commend the countries' steady history as war-time allies, adding, "I must emphasize my respect, admiration and camaraderie with the Fijian soldiers that I served with in Afghanistan," he said. "We trained together, we fought together, and most importantly, we laughed together."

Considering how much he and Markle are expected to smile in public — on this trip, especially — it's no doubt he repeatedly emphasized the significance of humor. They certainly need something to keep them grinning for 16 days straight. Well, other than each other, of course.