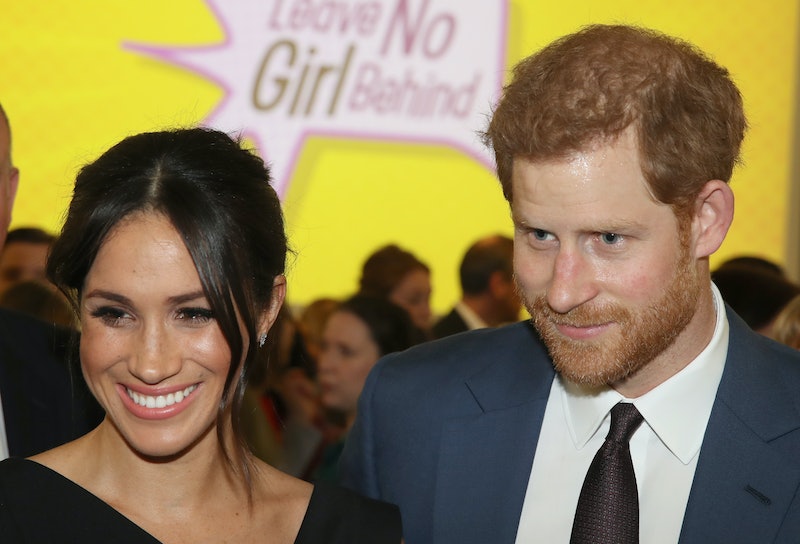 Once again, Prince Harry and Meghan Markle are breaking with tradition, and you're going to love them for it. On Saturday, May 12, Kensington Palace announced via social media that the royal wedding address will be given by The Most Reverend Michael Bruce Curry. As the presiding bishop of the Episcopal Church, Curry may not seem like an unexpected choice, but his inclusion in the big day is a reminder that this is one royal couple that continues to innovate traditions.

Curry is an unexpected, but welcome choice since he's American and a politically outspoken member of the church. He's also the Episcopal Church's first black presiding bishop. In many ways, it seems the reverend will be bringing Markle's heritage into the ceremony in a meaningful way, which furthers the couple's goals of having their wedding day be a personal one, according to The Telegraph.

The official announcement from Kensington Palace reads via Twitter,

"Prince Harry and Ms. Meghan Markle have asked that The Most Reverend Michael Bruce Curry, the 27th Presiding Bishop and Primate of The Episcopal Church, give the address at their wedding.

Presiding Bishop Curry will join The Dean of Windsor, The Rt. Revd. David Conner, who will conduct the Service. The Most Revd. and Rt. Hon. Justin Welby, Archbishop of Canterbury, will officiate as the couple make their marriage vows #RoyalWedding"

While the details of Curry's wedding address likely won't be revealed until the couple's actual wedding on May 19, the Telegraph's royal corespondent Hannah Furness wrote that he will be giving a "sermon about love" at the ceremony.

For his part, the reverend appears to be happy about being part of the ceremony. According to the British royal family's website, Curry said in a statement,

"The love that has brought and will bind Prince Harry and Ms. Meghan Markle together has its source and origin in God, and is the key to life and happiness. And so we celebrate and pray for them today."

Prince Harry and Markle appear to have no prior relationship with Curry. An official spokesperson for the Kensington Palace told the Telegraph,

"The couple and the Archbishop discussed a number of possibilities for a preacher. Whilst Bishop Curry is not personally known to the couple, it was felt that given the fact that he the Presiding Bishop of the Episcopal Church as well as a wonderful speaker and preacher, it would be highly appropriate for him to be invited to speak."

In many ways, the reverend is socially progressive, and he has shown that he isn't afraid to disagree with other members of the church. Curry has spoken out in favor of gay marriage in the past, according to The Washington Post. The Chicago-based preacher has also worked to create affordable daycare centers, summer camps, and educational centers. Additionally, Curry has spoken out against President Trump's "America first" rhetoric, and he's a supporter of immigrants' rights.

The British royal family generally avoids making political statements, but Prince Harry and Markle's choice of a speaker almost feels like one. It could be seen as a sign that the royal couple plan on being more outspoken about their political beliefs than their royal relatives. That would certainly be a refreshing change of pace, and one that could help the royal family maintain relevancy in a world where the monarchy has become more of a figurehead than anything else.

It's impossible to know whether or not Prince Harry and Markle will openly wade into the political sphere after their wedding. However, by choosing Curry, they've once again shown that they're unafraid of breaking with tradition when it really matters — and this is definitely one of those times. The reverend is helping the couple create a ceremony that will bring their transcontinental lives together in a way that's both symbolic and meaningful.