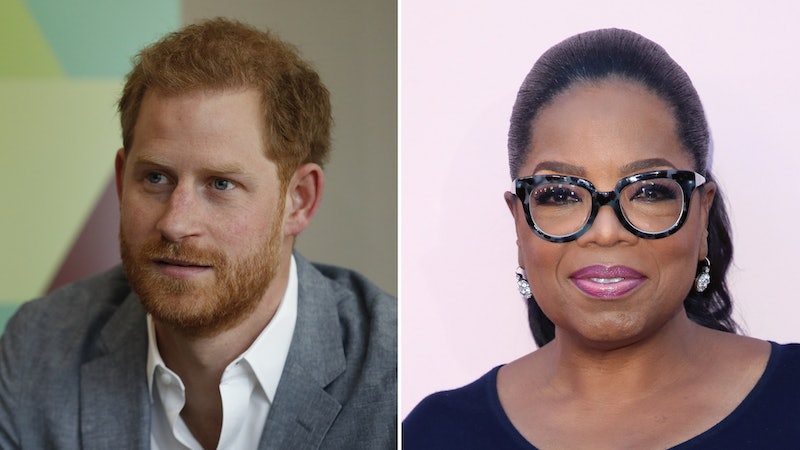 When the Duke and Duchess of Sussex set up their own Instagram account, it was inevitable that the royal couple would branch out from the Duke and Duchess of Cambridge and begin to do their own thing. Turns out that one half of the couple has already been working on an exciting new project. On Wednesday, it was announced that Prince Harry and Oprah Winfrey's mental health TV series will be launching on Apple TV+ in 2020.

The news was publicised via Harry and Meghan Markle's Instagram. (How very millennial of them.) According to a statement, Harry and Oprah have been developing the series for months and are formally listed as partners, co-creators, and executive producers.

A name hasn't yet been given, but the show is set to be a "dynamic multi-part documentary series" that will focus on two things: mental illness and mental wellness. It will encourage viewers "to have an honest conversation about the challenges each of us faces" and show them "how to equip [themselves] with the tools to not simply survive, but to thrive."

"I truly believe that good mental health — mental fitness — is the key to powerful leadership, productive communities and a purpose-driven self," Harry said in a statement. "It is a huge responsibility to get this right as we bring you the facts, the science, and the awareness of a subject that is so relevant during these times."

He continued: "Our hope is that this series will be positive, enlightening and inclusive — sharing global stories of unparalleled human spirit fighting back from the darkest places, and the opportunity for us to understand ourselves and those around us better. I am incredibly proud to be working alongside Oprah on this vital series.”

In response, Oprah commented: "Delighted to be partnering with you. Hope we shed a lot of Light. And change some lives!"

Prince Harry has long been an advocate for mental health support. In 2016, he, Prince William, and Kate Middleton set up Heads Together, a charity that aims to help people in the UK and Commonwealth access such services.

Harry has also opened up about his own mental health struggles following the death of his mother, Princess Diana. "I can safely say that losing my mum at the age of 12, and therefore shutting down all of my emotions for the last 20 years, has had a quite serious effect on not only my personal life but my work as well," he told the Telegraph in 2017.

He admitted to seeking the help of a counsellor after advice from his brother, adding: "I have probably been very close to a complete breakdown on numerous occasions when all sorts of grief and sort of lies and misconceptions and everything are coming to you from every angle.”

The Evening Standard reports there are plans for Harry to appear "on camera" in the upcoming series. However, it is unclear whether Meghan — who is expected to give birth this month — has been or will be involved.

Oprah isn't the most surprising of royal collaborators. The legendary talk show host was invited to Harry and Meghan's wedding back in May 2018. The 65-year-old was also one of the major faces at Apple's TV+ announcement. As the Hollywood Reporter states, she has more than one series in the works with the streaming service. A documentary series on toxic work environments along with her famous Book Club have also been signed up by Apple.

A member of the royal family in partnership with Oprah and Apple. Who could have predicted that one?