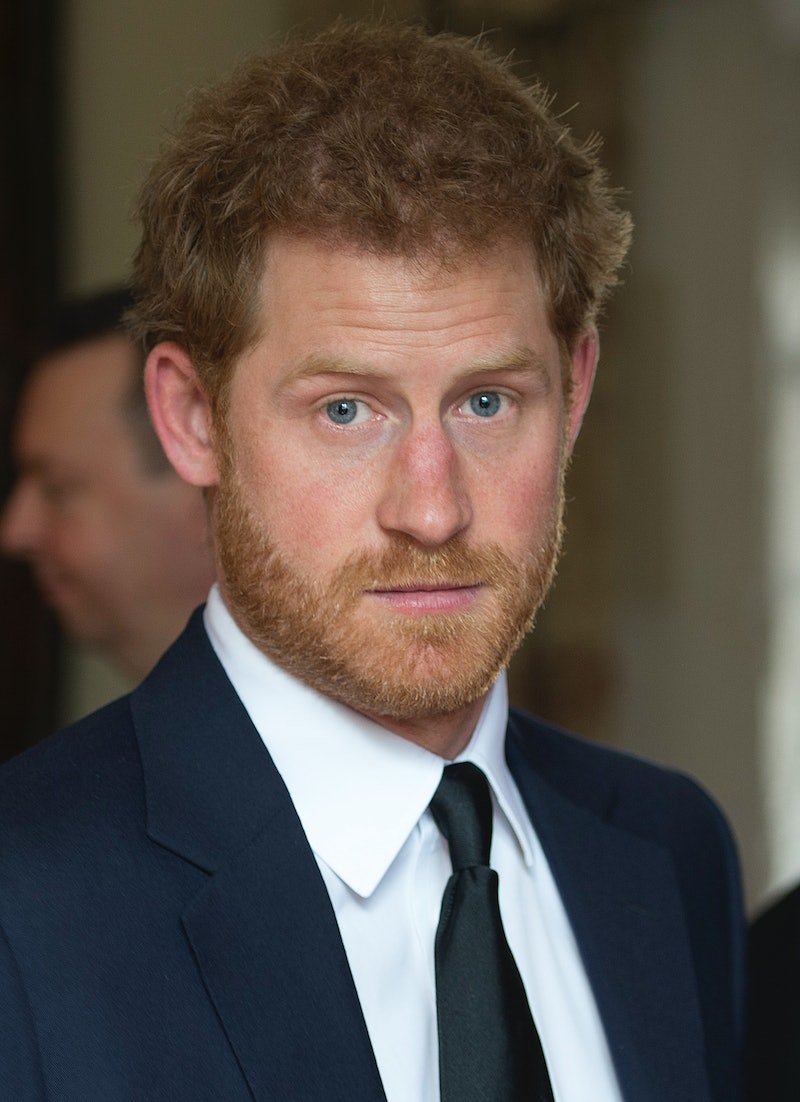 Part of the reason the royal family is so intriguing is that they're so mysterious. It's impossible to keep up with them on a reality show or through social media, so the only time we find out personal information about them is when they explicitly decide to share it themselves, and Prince Harry's latest message is one of his most important yet. In a new interview with the Telegraph, Prince Harry opened up about his struggles with his mental health, particularly when it came to grieving the death of his mother, Diana. And everything Harry is sharing is so important in reducing the stigma around getting help.

As Harry explained in the newspaper's Mad World podcast, the unexpected loss of his mother at such a young age was obviously incredibly difficult to deal with, so instead of coping, he ignored it. Not facing his grief led to "total chaos" in his life over 10 years later. So with the encouragement of his older brother, Prince William, he decided to seek counseling three years ago. And now, he's finally ready to open up about what that period of time in his life was like, as well as how he's doing today.

"I can safely say that losing my mum at the age of 12, and therefore shutting down all of my emotions for the last 20 years, has had a quite serious effect on not only my personal life but my work as well. I have probably been very close to a complete breakdown on numerous occasions when all sorts of grief and sort of lies and misconceptions and everything are coming to you from every angle.”

It's hard to imagine what that must have been like for him — especially while living life in the spotlight. But as brave and as important as it is that he's coming forward with such honesty, what he learned in the process is important, too: The fact that he's not alone in this, because so many people suffer from issues like grief and depression.

"Keeping it quiet is only ever going to make it worse... You'll be surprised, firstly, at how much support you get, and secondly, how many people literally are longing for you to come out. You've got so much more in common than you thought with some people."

As someone who has struggled with depression, I can say that in my own experiences, Harry is 100 percent right. When I was finally able to admit to my friends how I felt and that I had seen a doctor about it, it was amazing how quickly many of them shared that they'd been going through the same thing. It's awful that so many people can relate to this problem, but there's strength in numbers. Like Harry said in the interview, he's part of "quite a big club."

And an added bonus? The more people get talking about their own struggles with depression and mental illness, the less stigmatized they become, and maybe, it will really help someone who needs to hear that they're not alone and that it's OK to ask for help when they need it. It can be really stressful and hard just being a person, but if it can be easier, why not encourage people to take that first step in living a happier and healthier life?

It's awesome that Harry (along with William and Kate Middleton) has decided to make this his mission through the UK's Heads Together campaign, and that he's speaking so candidly about why this is personal for him. Hopefully, Harry's words will inspire those who needed to hear them.

More like this
9 Films About Mental Health To Watch On Netflix UK
By L'Oréal Blackett and Sophie McEvoy
I Was All For Medicating Mental Health Issues – Just Not For Me
By Anonymous, by Dana Smith
Doja Cat Needed Tonsil Surgery & Now She Can't Eat Taco Bell's Mexican Pizza
By Jake Viswanath
Britney Spears & Sam Asghari Announced Their “Devastating” Pregnancy Loss
By Stephanie Topacio Long
Get Even More From Bustle — Sign Up For The Newsletter