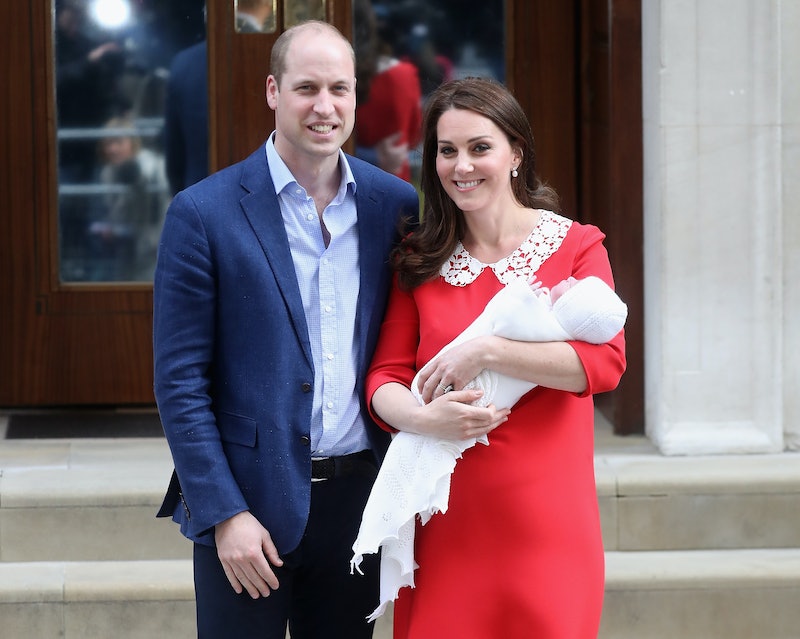 Members of the Royal Family will gather to celebrate the baptism of Prince Louis in London on Monday. As it turns out, there will be 7-year-old cake served at Prince Louis' christening, as Kate Middleton and Prince William are once again serving slices of their wedding cake to guests. According to the Royal Family website, the christening will take place at The Chapel Royal, St. John's Palace and will be attended by close family and friends. Guests include Meghan Markle, Prince Harry, Pippa Middleton, James Matthews, as well as the number of friends and family asked to be godparents for the baby. The Queen and Prince Philip will not be in attendance for the intimate ceremony.

Following the service, the Duke and Duchess of Cambridge are inviting their friends and family to a private tea at the Clarence House where they will serve a tier of their wedding cake. The royal wedding cake was designed by Fiona Cairns, and was made from 17 individual fruit cakes and had eight tiers. It followed the British tradition of fruit cake for a wedding, and was filled with candied fruits and bitter spirits, according to Eater. The eight tiers were covered in fondant, instead of royal icing.

In an interview with Town & Country Magazine, Cairns said the final cake stood 3-feet tall and clocked in at 220 pounds. It took an entire team of people to assemble. It's no surprise that there's still pieces of the dessert left to serve, and once again, the royals are able to share slices of the cake.

In the official statement on Prince Louis' christening, Buckingham Palace offered additional information on the special cake. Here's the significance behind the decoration:

"The cake was decorated with cream and white icing using the Joseph Lambeth technique. There were up to 900 individually iced flowers and leaves of 17 different varieties decorated on the cake. A garland design around the middle of the cake matched the architectural garlands decorated around the top of the Picture Gallery in Buckingham Palace, the room in which the cake was displayed during the wedding."

While it might seem unconventional to eat a 7-year-old cake, it's not unheard of to freeze a wedding cake and serve it at significant events later in the bride and groom's life. For example, it's considered good luck to save the top tier of the cake and eat it on the first anniversary. According to The Mirror, it's tradition for couples to save a tier of their wedding cake for their first child's christening, but the Duke and Duchess of Cambridge have done this for all three of their children.

Fans of the Royals might be wondering if Markle and Prince Harry saved any of their wedding cake, but the two diverged from tradition. The lemon sponge cake with elderflower syrup and Amalfi lemon curd used essential British flavors, but they opted out of the traditional fruit cake. The layers were also adorned with a simple elderflower buttercream, shying away from the intricate frosting designs seen on many royal wedding cakes before. The Duke and Duchess of Sussex will likely save pieces of the dessert, but it's not clear if it will serve in the purpose of tradition, as with the christenings.

Middleton and Prince William serving the tier of their wedding cake won't be the only symbolic moment from the ceremony. Prince Louis will wear the Royal Christening Robe, as is tradition. According to the Royal Family's website, the original robe was made in 1841 for the christening of Queen Victoria's oldest daughter, Victoria. The Queen commissioned Angela Kelly to create a replica to preserve the original, and this has been used since 2008 when James, Viscount Severn, wore it to his christening.

The Lily Font is another key part of baptismal ceremonies, according to the Royal Family's website. The Lily Font is a silver baptism font commissioned by Queen Victoria and Prince Albert in 1840, and it has been used for all royal baptism ceremonies since. Prince Louis' baptism will also use the font, keeping with this time-honored tradition.

Prince Louis' christening is sure to be a beautiful event, and it's clear that many royal customs will be honored. The Duke and Duchess of Cambridge have not shied away from keeping with royal traditions for past christenings, and this includes serving their wedding cake. The fruit cake is a longtime British tradition, but this baptism may be the last time this royal wedding cake is served to guests.