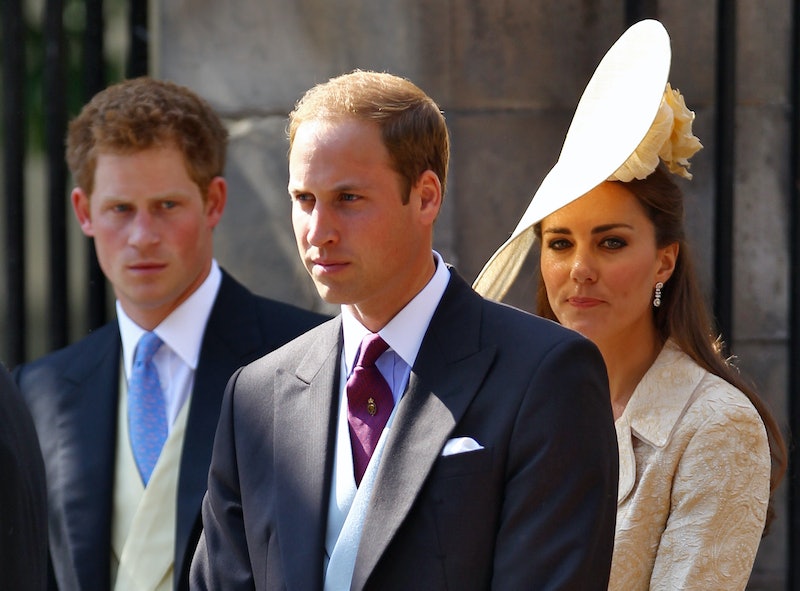 The day we've all been waiting for has arrived. And, no, I'm not talking about the royal wedding (although, that's exciting, too, of course). Prince William has officially shaved all of his hair off. Debuting the new 'do at a trip to the Evelina London Children’s Hospital while visiting patients, the royal looked great sporting the new style. William's hair and receding hairline has been in the spotlight for most of his adulthood — a good reminder for all of us that societal beauty standards exist for not just women. Male pattern baldness is a natural and incredibly common phenomenon, and William transitioned to his new look pretty darn gracefully.

It seems that more recently William decided to shave it all off, and social media reacted to the change positively. It's important to note that men should feel free to style their hair however they want (balding or otherwise), and one can only hope that William's choice was a personal one and not one that was inspired by media commentary. Regardless, though, many men who experience balding choose to shave their heads as they get older, so this was a move that many people saw coming. In an article about the haircut in The Independent, an expert says this move is one that signifies "confidence." But, hey, it's also possible the guy just needed a haircut.

In any case, Twitter is overjoyed with the new look.

"The future King is looking pretty good," one news outlet posted on Twitter.

Another person simply said, "Yay Prince William!" with a ton of exclamation points and some heart and haircut emojis. A simple, but effective response to the new 'do.

As you can see, William looks incredibly happy and confident with his new look. If his past comments are any indication, it's fair to assume that the royal didn't really take any of the public pressure to shave his head seriously. As Page Six noted, in Sept. 2017 the prince reportedly said, “I don’t have much hair, I can’t give you much business," to a hairstylist at a charity event.

Clearly, he is taking everything in stride. As one Twitter user pointed out, bald is, indeed beautiful.

One can only hope that William's new style will inspire other men to feel free to say goodbye to the notion that in order to be attractive, they have to look a certain way — or have to have a certain amount of hair. All hair is good hair. No hair is good hair, too. The only thing that's important really, is that you like the hair. And Prince William seems to be pretty into it, so more power to him (not that he needs any more because he is, you know, a prince already). But I digress.

While it's a long time since Prince William's teenage heartthrob days (he's 35 now), it still doesn't seem like too long ago that he was rocking a full head of hair and attending polo matches.

Given the difference today, it makes sense that some people would react when the hair slowly disappeared. But here's the thing: It's really no one's business at all.

So, if we're going to comment on Prince William's newly shaved head, it really should only be positively. There will surely be people who comment negatively about the new look, but, if anything, it's an example for all of us that the beauty standards we are all held to are a little absurd. Personally, I say let's just let the man live his hair truth. Even if that involves no hair at all.