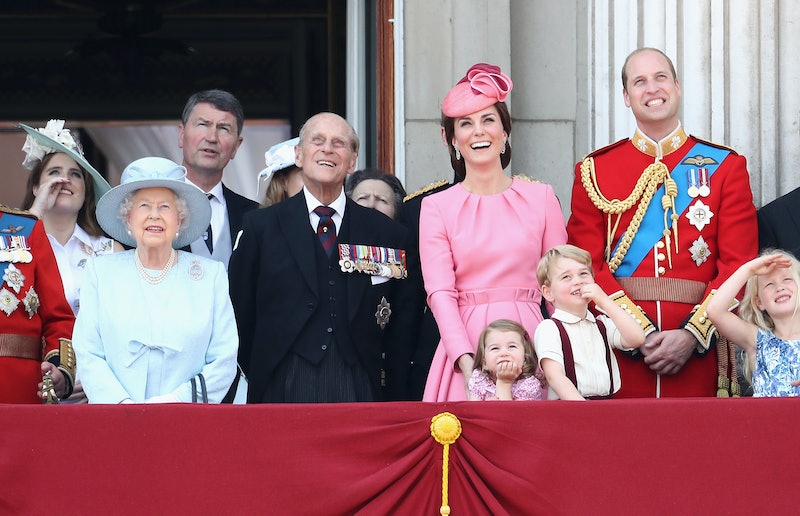 The British royal family is celebrating — and for good reason. The Duke of Edinburgh turned 98 on Monday and it's definitely a milestone to recognize. Even Prince William and Kate Middleton wished Prince Philip happy birthday on the official Kensington Palace Instagram. Their post is absolutely adorable and includes a few lovely photos of the three having a good time together in the past.

The Duke and Duchess of Cambridge captioned the series of images,

"Wishing a very Happy 98th Birthday to His Royal Highness The Duke of Edinburgh!"

It's a pretty traditional birthday message, but still a sweet way for the married duo to honor William's grandfather. As for the pictures they uploaded, the first shows a smiling Philip with Queen Elizabeth II. If you scroll to the second image, you'll see William wearing a huge smile as he looks at Philip. As for the third photo, the image captures Middleton laughing with a very happy Philip.

The final picture shows the couple standing on the Buckingham Palace balcony with Philip, the Queen, Prince Charles, and their two eldest children, Princess Charlotte and Prince George, and others during the 2016 Trooping the Colour parade. This event also marked Charlotte's balcony debut.

Middleton and William's post for Philip obviously shows how much they care about him. Their birthday message also highlights only a few of the many good times they've all shared together over the years.

Like William and Middleton, Philip was also celebrated by Prince Harry and Meghan Markle on Instagram. In a June 10 post via their joint Instagram account, Harry and Markle posted two images. The first features Harry, like William, smiling at Philip. The Duke of Edinburgh can also be seen smiling happily back at the Duke of Sussex. The second photo is a lovely throwback of Philip and the Queen dancing together. Harry and Markle captioned their Instagram, "Wishing His Royal Highness The Duke of Edinburgh, Sir, Grandpa a very Happy 98th Birthday!" [ birthday cake emoji]."

The official Instagram for Clarence House also opted for a throwback photo of Philip from 68 years ago. The black and white image shows him holding a very young Prince Charles' hand. The caption reads:

"Happy 98th Birthday to HRH The Duke of Edinburgh. [party hat emoji] #HappyBirthdayHRH A two-year-old Prince Charles holds The Duke’s hand after greeting his father following his return home from a trip to Malta in 1951."

Princess Eugenie also posted a few old photos of herself with her grandfather on Instagram. They, like the other images, shine a sweet light on his relationship with his grandchildren. Eugenie wrote next to her post, "Happy Birthday to HRH The Duke of Edinburgh. I found a couple of classic photographs of Grandpa and I on Christmas Day and Trooping the Colour a few years ago now.."

The British royal family certainly has a lot of beautiful memories and photos to celebrate Philip on such a special day. It's nice to see them all come together to honor their family member, especially on such a big birthday like 98.